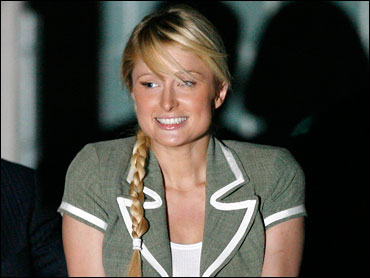 Newly-released from jail, Paris Hilton spent much of the day Tuesday with her family, her publicist confirms to The Showbuzz. Whether she's up for a night on the town is another story.

"I don't know what her plans are this evening," Elliot Mintz said Tuesday afternoon. "I just know that she's with her family now and intends to do the taping (with Larry King) tomorrow."

The hotel heiress presumably will discuss more long-range plans Wednesday when she appears on CNN's "Larry King Live" in an interview airing from his Los Angeles studio.

Hilton was all smiles as she walked out of a Los Angeles County jail early Tuesday, officially ending a bizarre, three-week stay that ignited furious debate over celebrity treatment in the jail system.

The 26-year-old celebutante was greeted by an enormous gathering of cameras and reporters upon leaving the all-women's facility in Lynwood about 15 minutes past midnight. She had checked into the Century Regional Detention Facility late June 3, largely avoiding the spotlight, after a surprise appearance at the MTV Movie Awards.

Hilton smiled and waved as she filed past deputies and the media, her blond hair pulled back in a braided ponytail. Her parents, Kathy and Rick, waited in a black SUV. Hilton hurried to the vehicle, where she hugged her mom through the window.

Hilton, who was wearing a sage jacket with white trim over a white shirt and skinny jeans, did not respond to reporters' questions.

"She fulfilled her debt. She was obviously in good spirits. She thanked people as she left," said sheriff's spokesman Steve Whitmore.

Chased by photographers in the air and on the street, the celebutante and her parents drove to her grandparents' mansion in fashionable Holmby Hills. She spent the morning behind the mansion's gates while people in more than a dozen cars came and went.

At one point, a black Cadillac Escalade arrived carrying balloons and a cake with the words "Welcome Home" in pink frosting. At another, a van from Dream Catchers Hair Extensions, Hilton's own company, passed through the gates. Dream Catchers receptionist Crystal Armijo confirmed the heiress was having extensions added to her hair.

Late in the morning a police officer went inside the mansion and came out a few minutes later to announce that the family would not be making a statement Tuesday.

"There's not going to be a press conference today," said police Sgt. B. Anthony Roberts.

Besides the few cars entering and leaving, there was little sign of activity throughout the day at the Holmby Hills house, which was shielded by large, wrought-iron gates, a block wall and tall shrubs.

Later in the day, as traffic began to back up for blocks and people in cars leaned on their horns, neighbors expressed their irritation.

"I'm trying to get my daughter to her dance class," an angry Mindy Mann said as she called police on her cell phone.

One passing motorist took both hands off the steering wheel to make an obscene gesture to reporters.

3Hilton herself told Ryan Seacrest by telephone last week about her plans following her release. "I will definitely get a good meal because the food in here is absolutely inedible and horrible," she said.

Over the weekend, her mother, Kathy Hilton, paid a visit to the jail and told reporters afterward that her daughter was itching to trade in her orange jail jumpsuit for something a bit more stylish.

"She doesn't like orange anymore," Hilton's mother said. "She can't wait to get that orange suit off."

The hotel heiress will complete her probation in March 2009 as long as she keeps her driver's license current and doesn't break any laws. She can reduce that time by 12 months if she does community service that could include a public-service announcement, the city attorney's office has said.

During her stay at the Lynwood facility, Hilton was mostly confined to a solitary cell in the special needs unit away from the other 2,200 inmates.

After spending only three days there, she was released to home confinement by Sheriff Lee Baca for an unspecified medical condition that he later said was psychological.

The following day, Superior Court Judge Michael T. Sauer, who sentenced the hotel heiress, called her back into court and ordered her returned to jail, saying he had not condoned her release.

Hilton left the courtroom in tears calling for her mother and shouting, "It's not right!"

She was then taken to the downtown Twin Towers jail, which houses men and the county jail's medical treatment center, where she underwent medical and psychiatric exams to determine where she should be confined.

Hilton's stay there cost taxpayers $1,109.78 a day, more than 10 times the cost of housing inmates in the general population.

The move by Baca caused a firestorm of criticism over whether the celebrity was getting special treatment. The Los Angeles County Board of Supervisors has launched an investigation into whether the multimillionaire received special treatment because of her wealth and fame.

At least one person has filed a claim against the county alleging she "had serious medical issues" but was not treated as well as Hilton.

A few days into her stint at the Twin Towers medical ward, the heiress said in a phone call to Barbara Walters that she had a new outlook.

"I used to act dumb. It was an act. I am 26 years old, and that act is no longer cute," Hilton said during the call, according to an account posted June 11 by Walters on ABC's Web site.

"It is not who I am, nor do I want to be that person for the young girls who looked up to me," Hilton was quoted as saying.

Hilton's path to jail began Sept. 7, when she failed a sobriety test after police saw her weaving down a street in her car on what she said was a late-night run to a hamburger stand.

She pleaded no contest to reckless driving and was sentenced to 36 months' probation, alcohol education and $1,500 in fines.

In the months that followed, she was stopped twice by officers who discovered her driving with a suspended license. The second stop landed her in Sauer's courtroom, where he sentenced her to 45-days in jail. She was released after three weeks for reasons including good behavior.