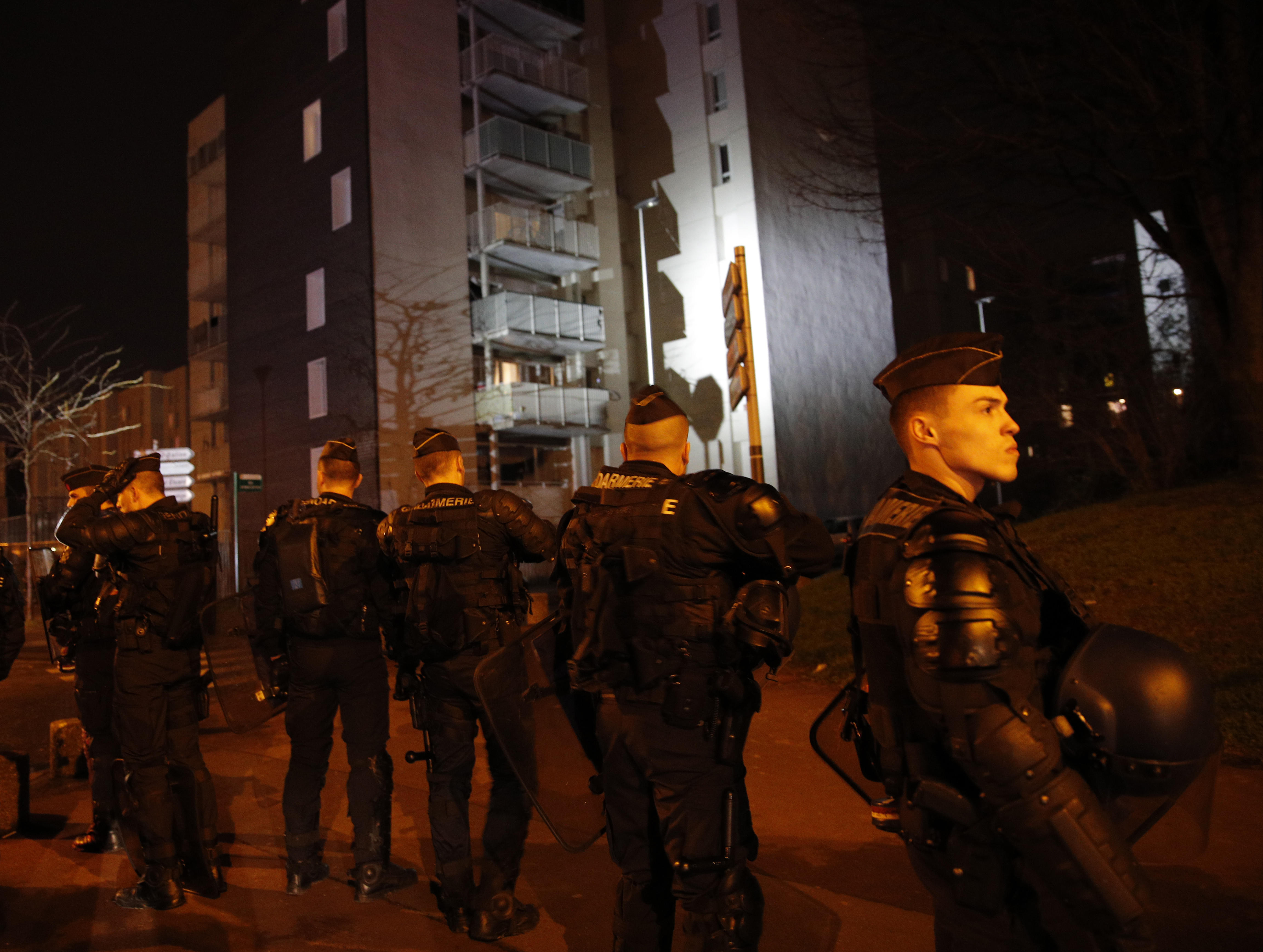 AULNAY-SOUS-BOIS, France -- A gang of masked rioters set more than a dozen vehicles ablaze in a car dealership as violence spread to more suburban Paris towns over the alleged rape of a young black man with a police baton, authorities said Wednesday.

Police made 17 arrests, according to the prefecture of the Saint-Seine-Denis region, a working class region northeast of Paris with a large minority population.

The violence, which has now spread to at least five towns, erupted after a 22-year-old man was allegedly sodomized with a police officer’s baton during an identity check last week. One officer was charged Sunday with aggravated rape and three others were charged with aggravated assault. Police deny the allegations.

Shock gripped France when a video, apparently showing the young man’s arrest, circulated on the internet. It showed him on the ground against a wall surrounded by four men, who appeared to be roughing him up.

In Aulnay-Sous-Bois, where the incident took place on Thursday, a gang of masked youth set fire to cars or bashed them in a private parking lot belonging to a Citroen dealership, damaging all 17.

Surveillance videos seen by The Associated Press show the men running through the outdoor parking lot dumping jerry cans of an inflammable substance on cars, which went up in flames. Some bashed the cars with instruments.

The owner of the Citroen franchise said 14 cars, including a special vehicle for the handicapped, were burned and three damaged from blunt force. The owner, who asked not to be identified for security reasons, estimated damages at 200,000 euros ($214,050).

Five of the arrests were in Aulnay, but it was unclear if any of those who invaded the parking lot were among them.

The head of the SGP police union, Yves Lefebvre, said that in one town, Tremblay-en-France, youth hurled Molotov cocktails at police, as well as heavy metal balls used in the popular game “petanque.”

“Setting a wheelchair van on fire is a disgrace. This has to stop,” he said.

President Francois Hollande visited the alleged victim, identified only by his first name, Theo, on Tuesday at the suburban hospital where he has been treated since the assault. The young man called for calm from his hospital bed, as did France’s prime minister.

Authorities are wary of unrest in France’s poor towns, remembering the fiery 2005 riots that spread through France - beginning in the Paris suburb of Clichy-Sous-Bois, near Aulnay, and hopscotching through social housing around the country.

The previous night police fired warning shots with live bullets to push back protesters in the unrest. Lefebrve said it was because they had neither rubber bullets nor tear gas, and were trapped between two gangs.

Raymonde Moreau, an 87-year-old resident of Aulnay-Sous-Bois, expressed concern about where the unrest might lead.

“There were times when (the area) was troubled, but it calmed down. So now, I don’t know. Here we go again,” she said.

Tension between the police and youths in Paris’ suburbs has reached the boiling point several times during the last decade.

Many of the young men who have been implicated in the terrorist attacks in France and Belgium during the last three years have come from or have links to the “banlieue.” The word, literally translated, means “suburb,” but it has come to be associated with the depressed, mostly immigrant neighborhoods on the outskirts of the French capital where unemployment is high and opportunity scarce.

“If you look at the situation of people, you understand the path they have taken to become a terrorist or whatever you call it,” Julien Villain, an 18-year-old resident of the Saint-Denis banlieue, who has a French mother and Moroccan father, told CBS News correspondent Vladmir Duthiers in a CBSN documentary broadcast last year. “Exclusion makes the terrorist, in my opinion.”

If marginalization is an ingredient for radicalization, it’s one the Islamic State of Iraq and Syria, or ISIS, has been able to capitalize on, recruiting thousands of Westerners to join their ranks in Syria and Iraq. At least six of the Paris attackers were French nationals.

The French government does not keep statistics based on race or religion, but surveys have found unemployment is as high as 30 percent in these immigrant neighborhoods.

Felix Marquardt, a convert to Islam whose efforts at reform have made him a target of extremists, said there is hardcore discrimination against Muslims -- especially men.