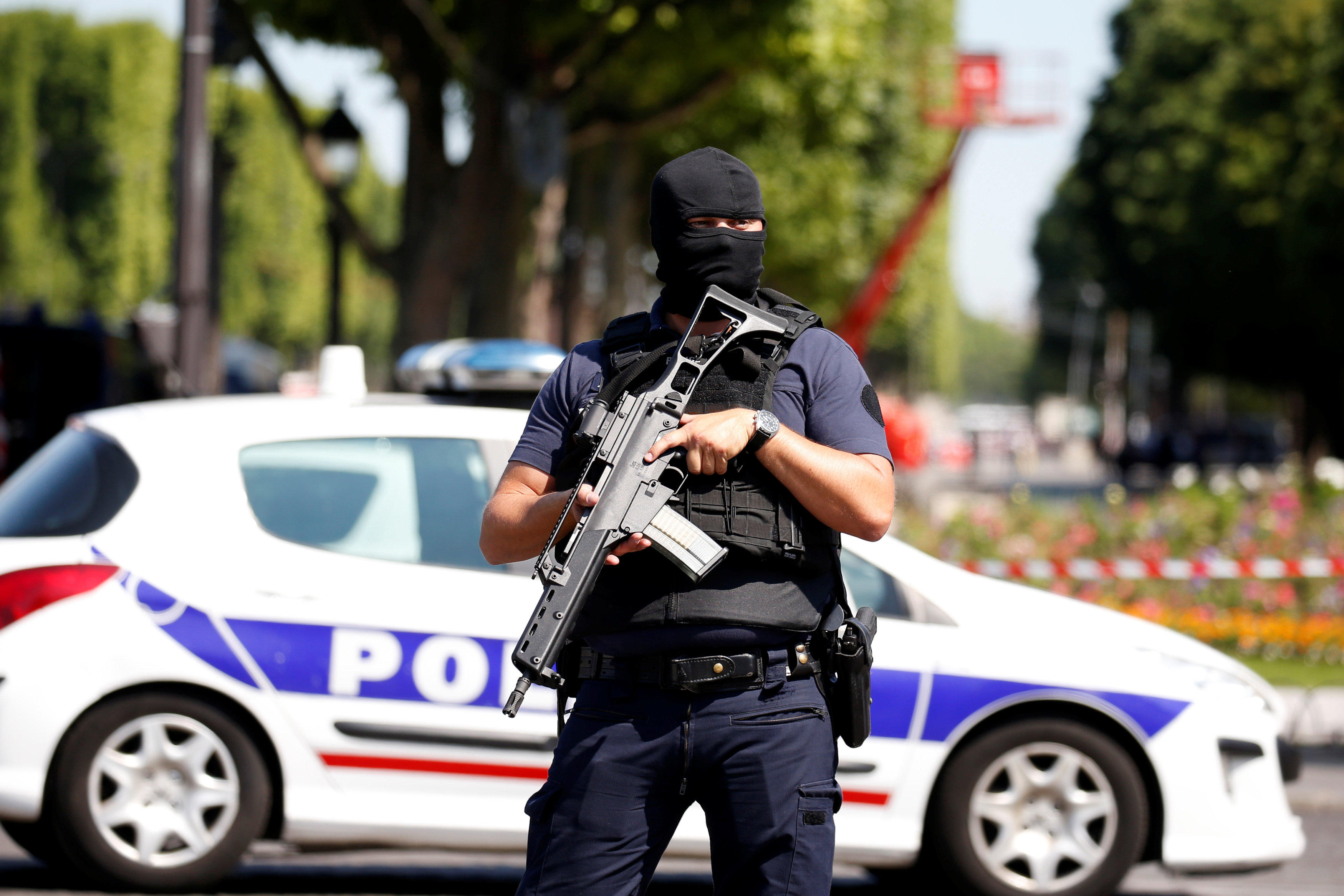 No police officers or passers-by were hurt, the Paris police department said. It is unclear why the attacker drove into police, though officials said the incident was apparently deliberate.

Interior Minister Gerard Collomb said the man was killed after an attempted attack on a police convoy, saying that shows the threat is still very high in the country and justifies a state of emergency in place since 2015. He said he will present a bill Wednesday at a Cabinet meeting to extend the state of emergency from July 15, its current expiration date, until Nov. 1.

He says the current situation in France shows a new security law "is needed" and the measure would "maintain a high security level."

Cellphone video from a witness, Eugenio Morcillo, showed the car exploding into cloud of orange flames after slamming into the van.

Two police officials told The Associated Press that a handgun was found on the driver, who they said was badly burned after the vehicle exploded. They identified the man as a 31-year-old man from the Paris suburb of Argenteuil who had an "S'' file, meaning he was flagged for links to extremism.

The officials spoke on condition of anonymity to reveal details of the incident, the second this year on the city's most famous avenue, which is popular with tourists from around the world.

An attacker defending the Islamic State of Iraq and Syria, or ISIS, fatally shot a police officer on the Champs-Elysees in April, days before a presidential election, prompting an extensive security operation.

On Monday, police cordoned off a broad swath of the Champs-Elysees after the latest incident, warning people to avoid the area.

Police "pulled an individual out of the vehicle who had struck the car in front (of the convoy," Brandet told reporters. "Large numbers of police converged on the scene, firefighters to extinguish the fire."

A man could be seen lying on his stomach on the ground immediately after the incident, wearing a white shirt and dark shorts.

Eric Favereau, a journalist for Liberation newspaper who was driving a scooter behind the gendarmes, said he saw a car blocking the convoy's path, then an implosion in the vehicle. Favereau wrote that the gendarmes smashed open the windows of the car while it was in flames and dragged out its occupant. Other gendarmes used fire extinguishers to put out the flames. The account didn't say what happened to the occupant of the car afterward.

Visitors to a nearby Auguste Rodin exhibit were confined inside the Grand Palais exhibit hall for an hour after the incident.

Victoria Boucher and daughter Chrystel came in from the suburb of Cergy-Pontoise for a Paris visit and weren't afraid to go to the famed avenue.

"We were better off inside than outside," Chrystel said. But both agreed as the mother said, "unfortunately we now are used to this."

"The show must go on," the daughter said in English.  "They won't win."