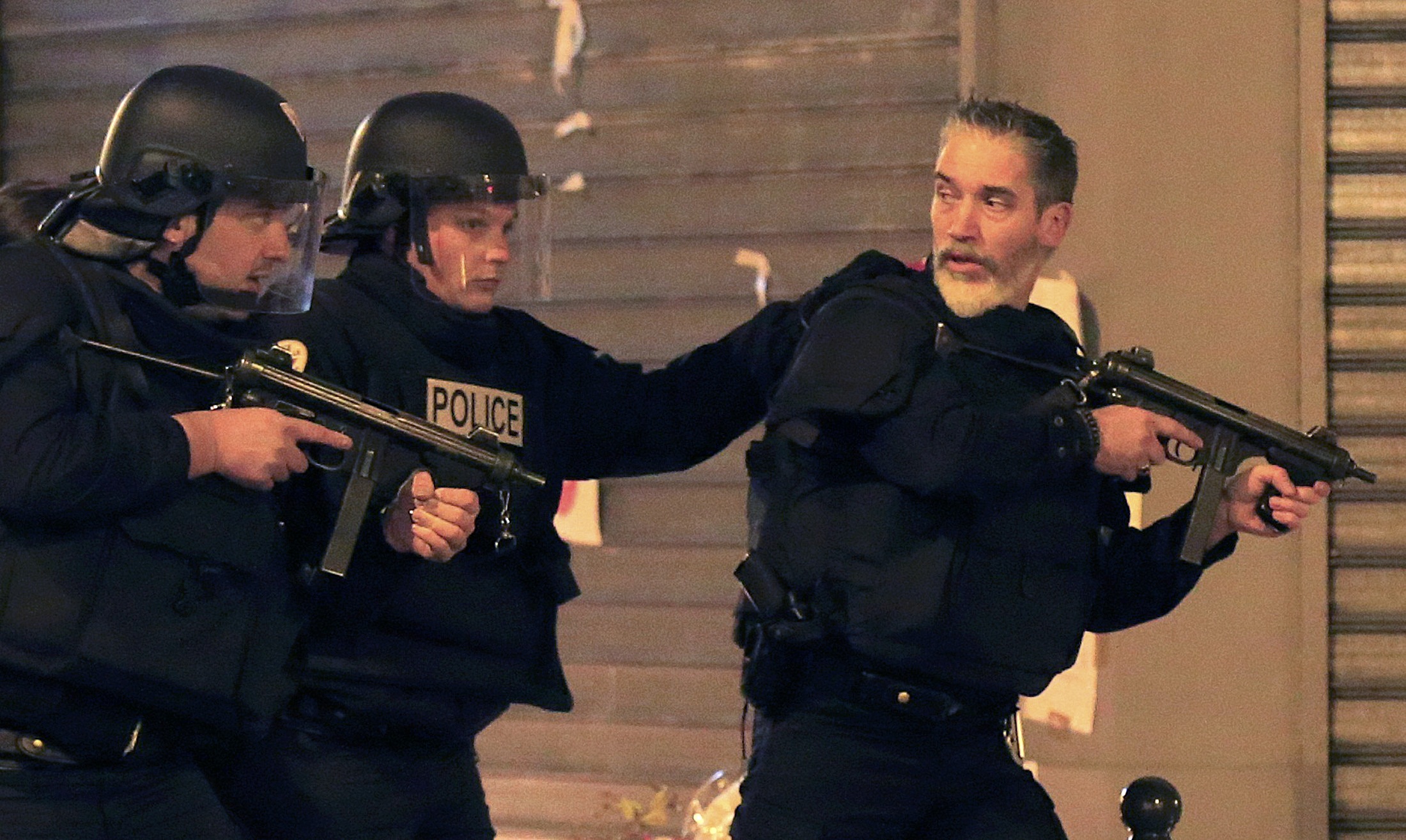 PARIS -- French police carried out about 150 raids across the country overnight, with officials saying Monday they had arrested a handful of terror suspects in the wake of the deadliest attacks inside France since World War II.

French Prime Minister Manuel Valls confirmed the raids and said police had prevented several attacks in recent months, and were aware that other attacks were being planned both inside France and elsewhere in Europe.

Police said many of the raids were focused around the southern city of Lyon. There alone police said five people were arrested and a cache of weapons -- including a rocket launcher, an assault rifle, bulletproof vests and various handguns -- seized.

"We are making use of the legal framework of the state of emergency to question people who are part of the radical jihadist movement, and all those who advocate hate of the republic," Valls said on French radio, according to Reuters.

A French official also identified the man suspected of masterminding the Paris attacks as Belgian Abdelhamid Abaaoud -- an individual long known to European authorities for links to extremism. Abaaoud is a Belgian citizen of Moroccan descent, and was the suspected ringleader of a separate plot earlier this year to kill police in Belgium.

Belgium's federal prosecutor's office said Monday that five of the seven people who were arrested over the weekend because of possible links to the Paris attacks have been released. The office also said that a raid in Molenbeek during much of Monday did not yield any terror arrests.

Last year Abaaoud appeared in an amateur video purportedly from Syria. In December 2014, posts on social media sites said Abaaoud was killed fighting for ISIS. So it came as a shock to police when they turned up phone calls made by him at the beginning of this year.

Belgian Foreign Minister Didier Reynders told CBS News in January that tracking the more than 300 Belgians who have gone to the Middle East to wage jihad is difficult enough -- tracking those who return is almost impossible.

Abaaoud -- like many others who left for Syria -- lived in a poor neighborhood of Brussels called Molenbeek. Belgian police carried out a new raid in Molenbeek Monday morning, reportedly linked to the Paris attacks. At least one person was reportedly arrested, but their identity was not immediately confirmed.

Meanwhile, as police announced the new arrests and hunted for more members of the sleeper cell that carried out the Paris attacks that killed 129 people, French officials revealed to The Associated Press that several key suspects had been stopped and released by police after the attack.

The arrest warrant for Salah Abdeslam, a 26-year-old born in Brussels, calls him very dangerous and warns people not to intervene if they see him.

Yet police already had him in their grasp early Saturday, when they stopped a car carrying three men near the Belgian border. By then, hours had passed since authorities identified Abdeslam as the renter of a Volkswagen Polo that carried hostage takers to the Paris theater where so many died.

Three French police officials and a top French security official confirmed that officers let Abdeslam go after checking his ID. They spoke on condition of anonymity, lacking authorization to publicly disclose such details.

The French were also reacting to the Friday night attacks on several locations in Paris -- which involved eight militants armed with machine guns and suicide belts, apparently dispatched by the Islamic State of Iraq and Syria (ISIS) -- with "massive" airstrikes on ISIS' de-facto capital in Syria.

A barrage of strikes Sunday night destroyed a jihadi training camp and a munitions dump in the city of Raqqa, where Iraqi intelligence officials say the attacks on Paris were planned.

Twelve aircraft including 10 fighter jets dropped a total of 20 bombs in the biggest airstrikes since France extended its bombing campaign against the extremist group to Syria in September, a Defense Ministry statement said. The jets launched from sites in Jordan and the Persian Gulf, in coordination with U.S. forces.

On the sidelines of the G20 summit in Turkey on Sunday, France's Foreign Minister Laurent Fabius said his country was justified in taking action in Syria.

"It was normal to take the initiative and action and France had the legitimacy to do so. We did it already in the past, we have conducted new airstrikes in Raqqa today, Fabius said. "One cannot be attacked harshly, and you know the drama that is happening in Paris, without being present and active."

Tantalizing clues about the extent of the plot have emerged from Baghdad, where senior Iraqi officials told the AP that France and other countries had been warned on Thursday of an imminent attack.

An Iraqi intelligence dispatch warned that ISIS leader Abu Bakr al-Baghdadi had ordered his followers to immediately launch gun and bomb attacks and take hostages inside the countries of the coalition fighting them in Iraq and Syria.

The Iraqi dispatch, which was obtained by the AP, provided no details on when or where the attack would take place, and a senior French security official told the AP that French intelligence gets these kinds of warnings "all the time" and "every day."

However, Iraqi intelligence officials told the AP that they also warned France about specific details: Among them, that the attackers were trained for this operation and sent back to France from Raqqa.

The officials also said that a sleeper cell in France then met with the attackers after their training and helped them to execute the plan. There were 24 people involved in the operation, they said: 19 attackers and five others in charge of logistics and planning.

None of these details have been corroborated by officials of France or other Western intelligence agencies.

All these French and Iraqi security and intelligence officials spoke with the AP on condition of anonymity, citing the ongoing investigation.

Abdeslam is one of three brothers believed to be involved; One who crossed with him into Belgium was later arrested, and another blew himself up inside the Bataclan theater after taking the audience hostage and firing on them repeatedly. It was the worst of Friday's synchronized attacks, leaving 89 fatalities and hundreds of people wounded inside.

ISIS claimed responsibility. Its statement mocked France's air attacks on suspected ISIS targets in Syria and Iraq, and called Paris "the capital of prostitution and obscenity."

In all, three teams of attackers including seven suicide bombers attacked the national stadium, the concert hall and nearby nightspots. The attacks wounded 350 people, 99 of them seriously.

Abdeslam rented the black Volkswagen Polo used by the hostage-takers, another French security official said. A Brussels parking ticket found inside led police to at least one of the arrests in Belgium, a French police official said.

Three Kalashnikovs were found inside another car known to have been used in the attacks that was found in Montreuil, an eastern Parisian suburb, another a French police official said.

As many as three of the seven suicide bombers were French citizens, as was at least one of the men arrested in Molenbeek, in Brussells, which authorities consider to be a focal point for extremists and fighters going to Syria from Belgium.

Belgian Interior Minister Jan Jambon, speaking to The Associated Press by phone, said suspects arrested in Molenbeek had been stopped previously in Cambrai, France, "in a regular roadside check" but that police had had no suspicion about them at the time and they were let go quickly.

One, identified by the print on a recovered finger, was 29-year-old Frenchman Ismael Mostefai, who had a record of petty crime and had been flagged in 2010 for ties to Islamic radicalism, the Paris prosecutor said.

A judicial official and lawmaker Jean-Pierre Gorges confirmed his identity. A judicial official said police have also identified two other of the suicide bombers, both French nationals who'd been living in Belgium: 20-year-old Bilal Hadfi, who detonated himself outside the Stade de France; and 31-year-old Brahim Abdeslam, the brother of fugitive Salah Abdeslam, who blew himself up on the Boulevard Voltaire.

Police detained Mostefai's father, a brother and other relatives Saturday night, and they were still being questioned Sunday, the judicial official said.

These details stoked fears of homegrown terrorism in France, which has exported more jihadis than any other in Europe, and seen many return from the fight. All three gunmen in the January attacks on the Charlie Hebdo newspaper and a kosher supermarket in Paris were French.

The attackers inside the Bataclan seemed quite young, according to one survivor, Julien Pearce, a journalist at Europe 1 radio who escaped by crawling onto the stage, and then out an exit door when the shooters paused to reload. Before making his final dash, he got a good look at one of the assailants, he said.

Struggling to keep his country calm and united after an exceptionally violent year, President Francois Hollande met Sunday with opposition leaders -- conservative rival and former President Nicolas Sarkozy as well as increasingly popular far-right leader Marine Le Pen, who has used the attacks on Paris to advance her anti-immigrant agenda.

Refugees fleeing war by the tens of thousands fear the Paris attacks could prompt Europe to close its doors, especially after police said a Syrian passport found next to one attacker's body suggested its owner passed through Greece into the European Union and on through Macedonia and Serbia last month.

Paris remains on edge amid three days of official mourning. French troops have deployed by the thousands and tourist sites remain shuttered in one of the most visited cities on Earth. Panic ensued Sunday night as police abruptly cleared hundreds of mourners from the famed Place de la Republique square, where police said firecrackers sparked a false alarm.

"Whoever starts running starts everyone else running," said Alice Carton, city council member who was at the square. "It's a very weird atmosphere. The sirens and screaming are a source of fear."

Officers also moved in, guns drawn, after mourners panicked near the Carillon bar, where crowds have laid flowers and lit candles in memory of the 15 people killed there.

"Lots of people started running and screaming from the Carillon...tables were overturned, plates shattered. It was a terrible panic," said Jonathan Dogan, who took shelter in a nearby hotel. "I think people are terrified," Dogan said.