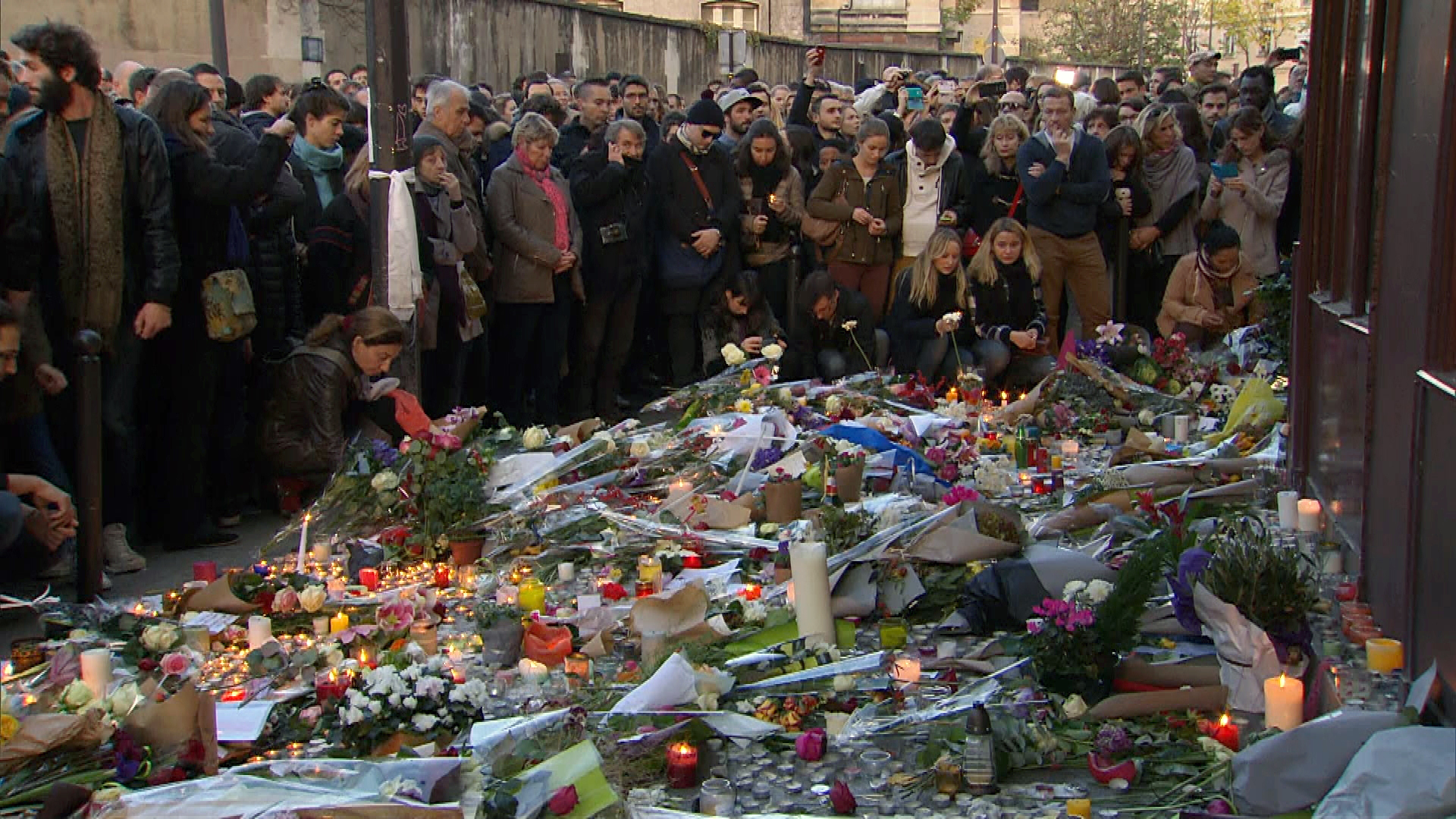 The following is a script from "The Paris Attacks" which aired on Nov. 15, 2015. Scott Pelley is the correspondent. Michael Gavshon and Keith Sharman, producers.

Two days after the Paris terror attacks, there are these developments.

CBS News is reporting there were eight attackers, seven of whom are dead. One is at large. Paris is on edge.

French police have recovered a car outside the city they believe the surviving attacker used to make his escape. It contained three AK-47 assault rifles.

Seven people have been detained in Belgium, as part of the investigation.

ISIS has claimed responsibility for the series of attacks, which left at least 129 people dead. Hundreds more were injured, including nearly 100 in critical condition.

Scott Pelley is in Paris for us.

On this Sunday night, the great bells of Notre Dame paid tribute to the dead and to the wounded. You're about to meet two witnesses to the assault on Paris. One of them was shot as he played dead inside the concert hall where most of the victims were killed. The other watched innocent people shot down by one of the terrorists. Together they paint a picture of the day that darkness fell on the City of Light.

Scott Pelley: What was the very first thing you saw?

Mark Colclough: A gunman. Dressed in black. Black boots, black trousers, tight, a black sweater of sorts, no collar. And standing in a very clear gun position, shooting position. He was holding a weapon, and had it shoulder, had it shouldered, and was shooting quite deliberately and precisely.

Mark Colclough, a Danish psychotherapist, was walking with a friend, toward the Bonne Biere café.

Scott Pelley: Where was he shooting?

Mark Colclough: The French have a habit of having chairs outside the cafe so you can sit with your back to the window and just watch the world go by. And people were doing that. And he shot three of them, just like that. The three that were sitting outside, he shot very quickly.

Scott Pelley: So, as he opens fire on the crowd outside the cafe--

"The French have a habit of having chairs outside the cafe so you can sit with your back to the window and just watch the world go by. And people were doing that. And he shot three of them, just like that."

Scott Pelley: What happened to those three people?

Mark Colclough: They fell off their chairs.

Scott Pelley: He hit them all?

Mark Colclough: Oh yeah, they were dead. Or, they fell off their chairs. We could see that. That's the first thing I saw. He was shooting that way, down to his right. Then he gyrated back, and he shot straight ahead into a car that was parked, that was at the crossroads next to the café.

Scott Pelley: What happened next?

Mark Colclough: He then stepped forward, and then he turned right and walked into the café that the three people had been sitting in front of.

Scott Pelley: It didn't appear to you that he had the weapon set on automatic, and he was just sweeping the room?

Mark Colclough: No. It wasn't random.

Scott Pelley: But he was picking out his targets, shooting them one at a time? Moving to the next target?

The shooting stopped. The gunman fled. Mark Colclough and his friend went to see if they could help.

Scott Pelley: When you went into the café what did you see?

Mark Colclough: Wounded. Some were, I could see one guy had been shot in his thigh. I could see another woman had already been given an oxygen mask, and was-- I could see the paramedics had put themselves on either side of her so I thought she was more critically wounded. And then towards the bar I could see on our left, I could see there were three of four dead bodies lying in front of the bar. Civilians. So, I looked down, and I saw big puddles of blood. Puddles. Not little droplets, but puddles.

Mark Colclough: And the, again, the smell of gunpowder in the room.

Half a mile away, an American band was playing to a packed house at the Bataclan music hall. Francois was by the stage. He's asked us to use only his first name.

Francois: There was about 1,500 people inside. So, people were standing and dancing at the ground floor.

Scott Pelley: On the ground floor, there are no seats? It's all open?

Francois: No seats. There is the bar at the back and people dancing at the front.

Scott Pelley: What was the first thing you noticed?

Francois: I so, I heard the-- the gunshots, about 10. I look back. And I saw this man shooting a rifle.

Scott Pelley: Describe him to me.

Francois: He was shooting shot-by-shot to make sure he was targeting the people. I don't know. Everything was methodic. Very precise and he was trained, he was clearly trained.

"He was shooting shot-by-shot to make sure he was targeting the people. I don't know. Everything was methodic. Very precise and he was trained, he was clearly trained."

Scott Pelley: Did they have to stop and reload?

Scott Pelley: You think he was experienced?

Francois was hit, a grazing bullet to the back. He fell to the dance floor and played dead.

Scott Pelley: What are you seeing around you? Were other people wounded nearby?

Francois: Yes. Yes. I saw people hurt. The--I saw people laid on the ground not moving. They were probably dead or several injured. There was-- there was blood all over the ground. And-- and yeah, it was a nightmare.

Scott Pelley: And when you realized there were multiple gunmen, what did you think?

Francois: I just realized that they were here to kill as many people as possible. So I just thought it was going to be a bloodbath, it was really hell. Like, people were just all pushing to the exit. It was it was really packed of people trying to get above each other, trying to ex-- trying to escape.

He made a break for it through this exit. Those are people hanging from the windows above.

Scott Pelley: As you're escaping through this door, was it difficult to get through that?

Francois: There was-- a lot of people on me for about 30 seconds.

Scott Pelley: On top of you?

Francois: Yeah, on top of me.

Scott Pelley: Crawling over you?

Francois: Yeah. It was about two people over me trying to escape. And it was really long to get out of the building.

Neighbors opened their apartments to the wounded. A stranger used a shirt to stop Francois' bleeding. Later, he overheard the police assault on the terrorists.

Scott Pelley: What happened then?

Francois Then we waited about two hours in the apartment. The police came to us making sure everybody was OK in the building.

Scott Pelley: Can you show me where you were hit?

Francois: Yes. So, I was shot here, at the-- so, at the-- on the back-- just below my shoulder. And the bullet came out here.

Scott Pelley: That's where the exit wound is?

Francois: Yeah. I-- the exit wound-- right here, close to the spine.

Scott Pelley: What did the doctors tell you about the course that the bullet took?

Francois: They told me I was extremely lucky. Because the bullet didn't touch any muscles or bones.

Scott Pelley: So lucky to be alive?

Alain Bauer: Unfortunately, if it happens here it will replicate somewhere else.

Alain Bauer is a former security advisor to the French government who helped New York City set up its counterterrorism unit after 9/11.

Scott Pelley: Is it possible that they could get that to the United States?

Alain Bauer: I think they will try. We are only the second worst country in the world for them. U.S. are the first.

Six locations were hit in 33 minutes. Alain Bauer believes that the main target was the soccer match between France and Germany, broadcast live across Europe. The French president was there. But outside the stadium only one victim was killed.

Alain Bauer: They arrived too late.

Scott Pelley: They arrived too late? After all this planning, they got there late?

Bauer says one terrorist failed to get into the stadium with a propane tank rigged to explode in a backpack full of nails and bolts. That bomber blew himself up.

Alain Bauer: The main issue was-- clearly, to create a lot of chaos. And it did not happen the way they wanted. So we had a lot of luck.

Alain Bauer: And it shows how people that are not very well equipped can have such a determination, first, to kill, bullet-by-bullet, people they never see, and prepare to kill themselves to show their case. This is a big change in the level of determination and of violence.

Scott Pelley: Too often, we think of these things in isolation. But here, in just the last few weeks now, ISIS blew up the Russian jetliner in Egypt, it attacked its enemies with a bomb in Lebanon, and now, a few days later, this attack in Paris.

When you connect the dots this is not over for the Western democracies.

Scott Pelley: You take them at their word.

Alain Bauer: Of course. Why not?

Paris was smaller today. So many dead. So many wounded. It seemed everyone knew someone lost to the violence. Children, who didn't understand, were shown how to pay respects by parents who would never let go of their hands so easily again.

Tonight, the city turned to its familiar traditions, a comfort against a future suddenly uncertain.