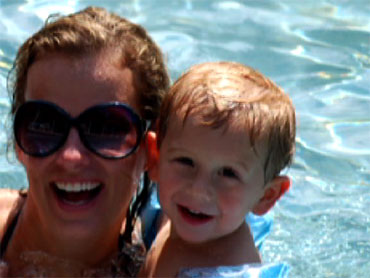 Almost three years ago, Jason and Christie Vaughn thought a dream was realized when they became the happy adoptive parents of a little boy they named Grayson.

An Ohio woman had given birth to him, but Christie was the first to hold him.

Christie told CBS News of Grayson's birth, "It was just her and I, the birth mom; it was just amazing."

But just weeks after the Vaughns brought their baby home to join their family, they were stunned by word thst Grayson's estranged biological father had petitioned Ohio courts for custody of his son.

The Vaughns were ordered by a judge to return Grayson to his biological father, but they maintained custody after filing an appeal in what has become a fierce three-year legal battle.

CBS News Legal Analyst Lisa Bloom said, "The chief problem here, and in a lot of adoption cases, is that the courts just take too long to get to a final resolution. A child is not a Christmas present that can be re-gifted if the recipient is not happy. It's been three years. The child has obviously bonded with this family, and to take him away now would be devastating for everyone involved."

Jason and Christie were to appear in court Tuesday, and they fear they may have to surrender Grayson, leaving them to contemplate how they'll tell their younger daughter and older son Grayson is going away.

CBS News National Correspondent Jeff Glor reported the attorney for the biological father has said courts have ruled in his client's favor, and that lawyer says the case should not be tried in the media.

In an exclusive interview on "The Early Show," Christy and Jason Vaughn shared their side of the story, from Louisville, Ky.

"Early Show" co-anchor Harry Smith asked the Vaughs, "When you barely have this child home, when the court is petitioned from the biological father to get little Grayson back, was there a part of you, at the time, that thought, 'Well, you know, maybe this is not to be, and we'll just let this child go?' Go back to his biological father?"

Jason said, "When we got the news, the first thing we did is we prayed about it. And we talked to our lawyers and we talked to the birth mother, and the birth mother said, 'It's my right to put the child up for adoption. This is what I want. I want him to be with you.' And so, we reached out to the birth father, tried to have a conversation with him. And he wouldn't talk to us. And so, from that point forward we, you know, we looked at the laws on the books, and the laws say, if a birth father has abandoned the birth mother during her pregnancy, then his consent is not required. And so that's what we've been standing on from the beginning."

Smith asked, "And why has the Ohio court then not upheld what you just said is the law?"

Jason responded, "I think that's the million dollar question. And Harry, it's not just me. The chief justice in the dissent of the Ohio Supreme Court said there's nothing in the adoption statutes that allows for a birth father to attack the adoption statute simply by establishing paternity. What's supposed to happen is a birth father is supposed to support a baby during a pregnancy, and there's supposed to be a hearing immediately after to determine whether or not he did support the birth mother during the pregnancy. That trial never happened. The trial was stayed and the adoption was dismissed without a hearing. The statutes weren't followed. ... The statutes are designed so that these problems don't drag out for three years. The statutes are designed so there's a hearing early on and that hearing establishes whether the father has rights to object. In this case, the justices simply ignored the law."

As for the family, Christie said she has trouble putting into words what they're going through.

She said, "We are so scared we're going to lose our baby. You know, I've got two other children I've got to explain this to. How are they going to be OK with losing their brother?"

Christie added, "I just want to ask if there's a congressman, a judge, a senator, the Ohio governor, the Indiana governor, please get involved. Please. I am begging you. This is our family."

Smith pointed out that, last September, the Indiana court basically decided in the Vaughns' favor.

And today, according to Jason, the biological father is asking for enforcement of a juvenile court order that Grayson be returned to him.

"They've ordered that he be returned today. Now, today, his birth father has asked for the Indiana court to enforce that. So today when we go, the Indiana court's going to have to decide whether or not that's a valid order. And again, our position is (that it's) not. We were declared not a party to that custody hearing in Ohio. Even though we've had Grayson from the beginning, the Ohio juvenile court declared us a legal stranger and we were not part of that hearing. No evidence was presented as to Grayson's best interest; no evidence was presented as to the fitness of the father. We had it up there with us at that time, the birth mother that was prepared to testify as to her abandonment. We had a child psychologist that was prepared to talk about all these things. And the hearing didn't happen. So, today we're hoping that an Indiana judge finds the order is not valid."