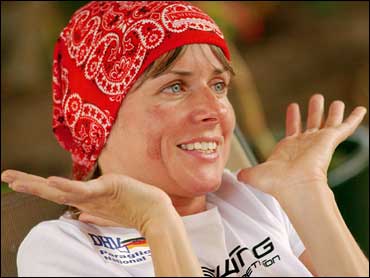 A German champion paraglider survived one heck of a rough ride at the hands of mother nature.

Ewa Wisnierska was sucked into a powerful thunderstorm while training for the world paragliding championships in Australia. She was carried, unconscious and wearing a layer of ice, to an altitude of more than 32,000 feet into the eye of the storm.

"The glider kept climbing, climbing, and I couldn't see anything. Then it got dark. I was already shaking, all wet, all the instruments were wet and frozen" she recounted to Australian television network AuBC.

She described the moment she realized she was in the middle of the storm, when she first heard thunder in front of her — and then a loud clap from behind.

"I was only praying, 'please, please throw me somewhere from this cloud," she said.

Wisnierska lost consciousness for about a half-hour while her glider flew uncontrolled, but she woke up, still in the storm.

Slowly she navigated her way out of the storm, and caught a glimmer of hope. "When I saw the Earth, I was like, wow… maybe, probably I will survive," she told AuBC.

She survived the ordeal with just some frostbite to her face and some abrasions to her leg from the pelting hail.

Dr. Ken Harrison, a retrieval specialist with the Australian rescue agency, said it is "kind of a medical miracle that her body was able to cope" with the unconscious glide through the freezing storm.

The same storm killed a Chinese competitor, who died from an apparent lack of oxygen and extreme cold. His body was found 47 miles from where he took off.