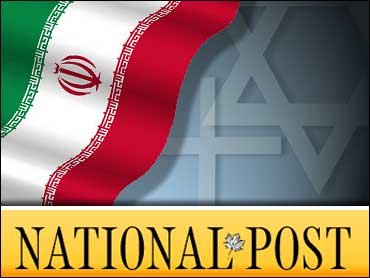 A Canadian newspaper has apologized for publishing an erroneous story last week that said the Iranian parliament had passed a law requiring Jews and Christians to wear badges identifying them as religious minorities in public.

The story published in the National Post last Friday has stirred up an international row, and the Iranian government on Wednesday summoned Canada's ambassador to the foreign ministry in Tehran.

The measure provoked outrage outside Iran after the National Post, a conservative national daily, reported that the bill included provisions requiring Jews, Christians and other non-Muslims to wear a patch of colored cloth on the front of their garments — in a chilling throwback to Nazi Germany, when Jews were forced to wear the yellow star of David.

The Post, quoting Iranian expatriates living in Canada, reported the law would require "Iran's roughly 25,000 Jews ... to sew a yellow strip of cloth on the front of their clothes, while Christians would wear red badges and Zoroastrians would be forced to wear blue cloth."

The report brought immediate criticism from the United States, which is locked in a standoff with Iran over its nuclear program. The Simon Wiesenthal Center in Los Angeles, a Jewish human rights group, was compelled to send a letter to U.N. Secretary-General Kofi Annan asking him to look into the matter.

In Tehran, legislator Emad Afroogh, who sponsored the bill and chairs the parliament's cultural committee, told The Associated Press last Friday there was no truth to the report.

"It's a sheer lie. The rumors about this are worthless," he said.

A copy of the bill, obtained by The Associated Press in Tehran on Saturday, makes no mention of requiring special attire for religious minorities.

Iranian state television reported Wednesday that Canadian Ambassador Gordon Venner had been summoned to the foreign ministry. The meeting comes on the heels of comments by Canadian Prime Minister Stephen Harper, who said last Friday that while he could not vouch for the accuracy of the National Post report, he believed Iran was capable of such actions.

"Unfortunately, we've seen enough already from the Iranian regime to suggest that it is very capable of this kind of action," Harper said. "It boggles the mind that any regime on the face of the Earth would want to do anything that could remind people of Nazi Germany."

Douglas Kelly, editor-in-chief of the National Post, ran a lengthy Page 2 column in Wednesday's editions explaining that the story was based on a column by Amir Taheri, an Iranian author and journalist, and two expatriate Iranians living in Canada.

"We acknowledge that on this story, we did not exercise sufficient caution and skepticism, and we did not check with enough sources," Kelly wrote. "We should have pushed the sources we did have for more corroboration of the information they were giving us."

He noted the newspaper believed it had confirmation of the story from the Simon Wiesenthal Center — which later told the paper it had not independently confirmed Taheri's allegations — the Iranian exiles and then a no-comment response from the Iranian Embassy in Ottawa.

"We apologize for the mistake and for the consternation it has caused not just National Post readers, but the broader public who read the story," Kelly said.

Taheri, on his Web site, wrote that the National Post "jumped the gun" and misinterpreted his original column. He insisted, however, that his sources in Tehran's parliament tell him that the concept of badges for religious minorities has been discussed for several years.

Relations between Canada and Iran cooled after the 2003 death of Iranian-Canadian photographer Zahra Kazemi, who was arrested by Iranian authorities while covering a student demonstration and died in detention of a fractured skull and brain hemorrhage. In November, an appeals court upheld the acquittal of an Iranian intelligence agent and ruled Kazemi's death was not premeditated.