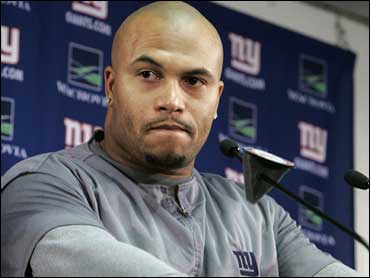 The threat of an indictment endangers Pierce's status for the upcoming NFL season. Pierce, a pro-bowler who led the Giant's defense to a Super Bowl victory in 2008, is a key component to any chance the team may have of returning to the championships.

"The DA's office has confirmed that they are going to seek charges against Antonio," Pierce's lawyer, Michael Bachner, told the Post yesterday. The same grand jury that is considering former Giants' receiver Plaxico Burress' illegal weapon indictment will consider Pierce's case, according to the paper. Pierce could face a felony criminal weapons possession charge, which carries a mandatory 3 1/2-year sentence.

Pierce was with former Giants teammate Burress in a Manhattan nightclub when Burress accidentally shot himself in the leg with an unlicensed weapon. A security guard at the club picked up Burress' gun and stashed it in the glove compartment of Pierce's Escalade, according to law enforcement sources who spoke to the Post.

Police have said that after driving Burress to the hospital, Pierce drove home to Totowa, N.J., before bringing the gun to Burress' house.

Pierce's lawyers maintain that the football player did nothing illegal.

"It's our position Antonio committed no crime whatsoever, and had no way of knowing that the weapon was anything other than properly licensed," Bachner said, according to The Post. "Antonio acted bravely and responsibly to save what he thought could have been his teammate's life by driving him to the hospital."