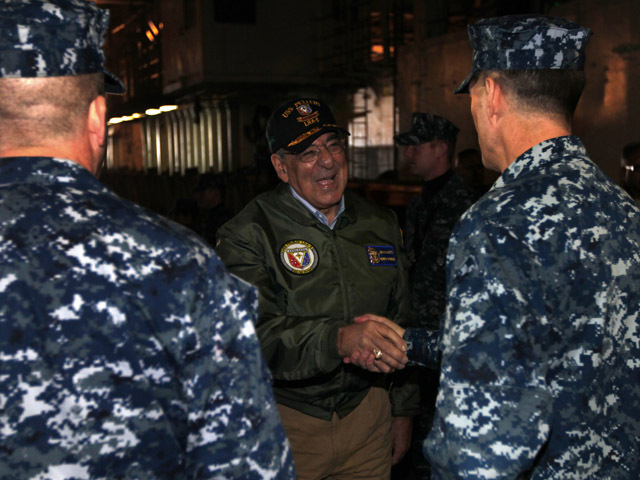 (AP) ABOARD THE USS PELELIU - Defense Secretary Leon Panetta told U.S. Marines and sailors on Friday that Congress would be irresponsible if it doesn't act to prevent drastic military budget cuts.

In a visit to this amphibious assault ship off the Southern California coast, he also said Afghanistan is making progress against the Taliban but Iran remains a potential threat to the U.S.

A budget agreement reached last August calls for defense cuts of $487 billion over a decade, a reflection of the drawdown of two wars in Iraq and Afghanistan and the pressure to reduce the nation's deficit.

The failure of Congress to come up with at least $1.2 trillion in savings means automatic cuts of more than $1 trillion next January to defense and domestic programs.

Congress "did a stupid thing" in risking the $50 billion in across-the-board reductions that would kick in next January, Panetta told hundreds of Marines and sailors.

"What they essentially did was to put a gun to their heads and to the heads of the country," he said.

Answering questions from service members and journalists, Panetta also said last year was a turning point for the war in Afghanistan, where the U.S. is winding down its combat role.

Afghan forces are doing their job in the country and more than 50 percent of the Afghan population is now living in areas secured by the Afghan government — showing the U.S. strategy of handing over the security to them is working — but ultimately it will be up to Afghans, the secretary said.

"We can't let anything, anything undermine that strategy," he said.

He said the level of violence in Afghanistan dropped last year for the first time in five years and the Taliban was weakened.

Afghanistan's neighbor, Iran, continues to be a threat to U.S. interests, however.

"If Israel decides to go after Iran and we have to defend ourselves, we could be engaged sooner than any of us want," he said.

It was not clear whether Panetta was saying the United States would automatically be engaged if Israel would attack. It also is not clear if the Obama administration has plans to be engaged with Iran.

"Our focus is on diplomacy and international pressure on Iran. I'm not going to speculate on what would happen in various scenarios other than to say that we will be ready," Carl Woog, Panetta's spokesman, said later.

"The secretary said we have plans for any contingency and we're not going to speculate about timelines or future actions," he added.