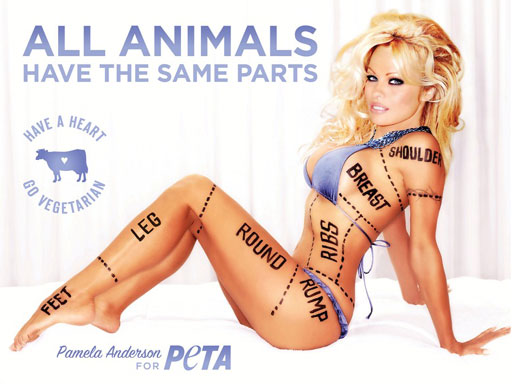 NEW YORK (CBS) Pamela Anderson was set to unveil a new PETA campaign in Montreal today but was denied a permit to hold the event because the ad was considered sexist.

Montreal's film commission denied Anderson and the animal rights organization a permit to stage the poster unveiling in Place Jacques-Cartier.

In an email to PETA, Montreal City Commissioner Josee Rocheford said the ad "goes against all principles pubic organizations are fighting for in the everlasting battle of equality between men and women."

"I think it's silly," the Canadian-born actress said at a press conference on Thursday, according to The Hollywood Reporter.

"Montreal is known for its liberal attitude, so it doesn't make much sense," she added.

The ad shows a scantily-clad Anderson with her body parts sectioned off as if they were cuts of meat and labeled with words like "breast," "round" and "rump."

The caption reads: "All animals have the same parts. Have a heart - Go vegetarian."

PETA Senior Vice President Dan Mathews, who was in Montreal with Anderson for the unveiling, added, "I think that city officials are confusing 'sexy' with 'sexist.'"

Anderson said that the ban may actually benefit the campaign.

"It's unfortunate, but everyone's talking about it. So it worked to our advantage."

The unveiling will reportedly now take place inside the privately-owned Restaurant Globe in the city.