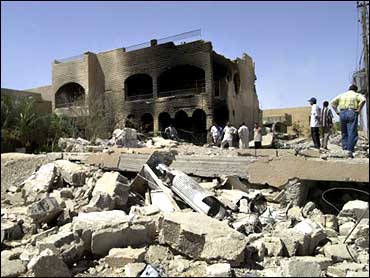 Negotiations to end the fighting in Najaf broke down Sunday, threatening to spark a resurgence of the fierce clashes between Shiite militants and a combined U.S.-Iraqi force that have plagued this holy city for more than a week.

The collapse of talks will likely cast a pall of Iraq's National Conference, which starts Sunday, gathering 1,300 delegates from all over Iraq in what is considered a vital step toward establishing democracy.

The chief government negotiator said he decided to quit the talks in Najaf after three fruitless days, but representatives of militant cleric Muqtada al-Sadr said a deal had been all but reached before interim Prime Minister Ayad Allawi personally intervened to quash it.

U.S. forces called a halt to a major offensive in the city on Friday to give negotiations a chance. The fighting in Najaf has angered many in Iraq's Shiite majority, complicating a difficult situation for Allawi's U.S.-backed government, which has been keen to show it is in control.

The chairman of the National Conference, Fuad Masoum, insisted the violence would not affect the three-day gathering. "This is a perfect time for the conference to discuss the current problems and find solutions," he said.

About 10,000 demonstrators from as far away as Baghdad arrived in Najaf on Saturday to show their solidarity with the militants and act as human shields to protect the city and the holy Imam Ali shrine, where fighters from al-Sadr's Mahdi Army have taken refuge since the fighting started Aug. 5.

For Iraq's interim government, says CBS News Correspondent Barry Petersen, the Najaf powderkeg is a clear challenge to power. Lose this one and, as one observer put it, "They will rule little more than Baghdad."