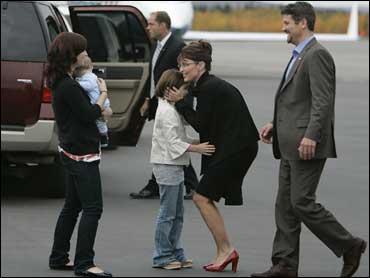 Sarah Palin is the breadwinner and husband Todd is, well - he takes a lot of deductions for his fishing and snowmachine racing careers, according to 2007 and 2006 federal tax returns released Friday.

Sarah Palin makes $125,000 a year as Alaska governor. Plus, since she took the job in December 2006, she hasn't paid taxes on the more than $17,000 she received in controversial per diem payments for working out of the family's lakeside home in Wasilla - some 575 miles from the capital of Juneau.

For the 2007 tax year, Todd Palin's self-employment brought him $66,893 in gross receipts - $49,893 from fishing and $17,000 from snowmachine racing. But, the returns show, he claimed so many deductions that he reported only $15,513 net profit from the fishing operation and claimed a $9,639 loss from his racing, leaving him with an overall net income of only $5,874. In addition, Todd earned $43,519 last year working part-time on the North Slope for BP Exploration.

The self-employment deductions left the Palins, who have four dependent children, with a 15 percent tax rate for 2007 and a rate of less than 10 percent for 2006. Todd Palin also deducted for the business use of their home in Wasilla. A fifth child was born to the couple this year.

An Associated Press analysis of the returns released by the McCain campaign also reveals that the Palins underpaid their estimated taxes with an April extension and likely owe interest.

Todd Palin offset his $17,000 gross receipts for snowmachine racing by claiming $10,858 in depreciation, $2,425 for car and truck expenses and $1,559 for supplies. An additional $11,405 was claimed for "other," which included fuel, entry fees, equipment parts, repairs and maintenance, cell phone, memberships, "sponsorship apprec" and "gear."

On the 2006 return, Todd Palin had total receipts from the fishing and snowmachine racing of $48,082, but after deductions his net income was $10,164.

Sarah Palin was only governor for one month in 2006, and Todd Palin earned $102,716 working for BP Exploration, a post he says he's temporarily left.

"This is a lady who screams about everyone in federal government taking advantage, and she's taking every advantage she can," said Sheldon Cohen, IRS commissioner in the Johnson administration. "They are milking every possible deduction. They have a right to, if it's legitimate. The question is, is he in the racing business or is it a hobby?"

Robert Cross, first vice president of the National Society of Accountants, said the Palin business deductions were "typical middle America, John and Jane Plain," but he felt they would definitely owe interest and "possibly a small penalty, depending on all the circumstances."

An underpayment noticed by the AP could lead to interest charges against the Palins but probably not penalties.

On an undated extension form filed with a $2,000 check dated April 11, the Palins claimed an estimated tax liability of $22,721 and total withholding payments of $20,721. The attached check meant the couple believed they had paid all of their taxes for 2007, as required. However, when they filed their taxes last month, dated Sept. 3, their tax liability turned out to be $24,738 - meaning they owed an additional $2,017.

IRS rules require that when a taxpayer files for an extension in April, all outstanding taxes must be paid at that time.

When asked if the Palins had paid any interest or penalties, and if so, how much, Maria Comella, a McCain-Palin spokeswoman, said the couple had paid "at least $2,017," and that the campaign was researching if an additional payment had been made.

"In April, they made a reasonable estimate of what they would owe, and they underpaid," she acknowledged.

"They're going to be billed the interest," said Cohen, who has contributed to the Obama-Biden campaign. He said the Palins would likely avoid penalties because their tax payments as of April for last year were higher than all payments made the prior year.

On federal financial disclosure forms, also released Friday, Palin and her husband listed assets worth from $960,000 to $2.3 million. Because the values of assets are reported in broad ranges, it's not possible to calculate an exact value for their holdings.

Like many Americans, their most valuable asset is their home. Theirs, in Wasilla, is valued at $500,000 to $1 million. According to the Matanuska-Susitna Borough, the land and structure are appraised at $552,100.

On their tax returns, the Palins said they donated $8,105 to charity over the two years. The bulk of the donations came in "gifts by cash or check" - $4,250 in 2006 and $2,500 last year. Comella said the Palins gave the money to local churches, but she would not elaborate.

The Palins made noncash charitable contributions, claiming "thrift store value" of $825 for a Dec. 31, 2007, donation to the Salvation Army of Wasilla.

The column used to describe the donated items states only "Wasilla Alaska." When asked to explain, Comella said, "I believe this is actual things that were part of their property - furniture, clothing and so forth. That was generally what they donated."

Asked to explain the missing $600 on the actual return, Comella said that figures in two columns had been reversed - that the $1,000 was actually the donor's cost and the $400 listed under that category was actually the fair market value. That would make the total donation the same $630 listed elsewhere on the Palin return.

"It was a typographical error that didn't change any of the main numbers," said Comella.

More recently, the IRS has tightened documentation rules for all charitable contributions.

Regarding the per diem dispute, Comella said Juneau is the governor's home base and therefore whenever she works elsewhere, she is entitled to charge the state. Comella contended the per diem payments are not taxable.

Cohen said it was fine for the state of Alaska to determine it was OK to reimburse Palin to work out of her home, but the state's decision didn't mean those benefits were not taxable by the federal government. "One has nothing to do with the other," said Cohen.
By Associated Press Writer Richard T. Pienciak