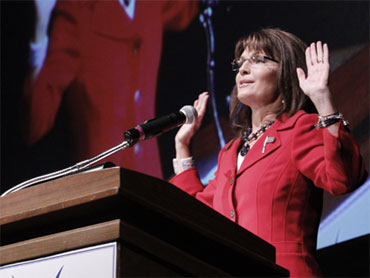 For her next book tour, Sarah Palin will again skip some of the nation's biggest cities.

HarperCollins announced Wednesday that the former Republican vice presidential candidate and Alaska governor will be on the road from Nov. 23 to Dec. 3, with a break for Thanksgiving, to promote "American by Heart: Reflections on Family, Faith, and Flag." The book comes out Nov. 23 and is her first since her memoir, "Going Rogue."

As with "Going Rogue," Palin will not make appearances in New York, Los Angeles, Seattle, San Francisco or other cities where Democrats are more in favor. She will spend little time on either coast.

The tour begins in Phoenix, in the home state of her 2008 running mate, John McCain. Other stops include Andover, Kan.; Little Rock, Ark.; Brentwood, Tenn.; and Columbia, S.C.