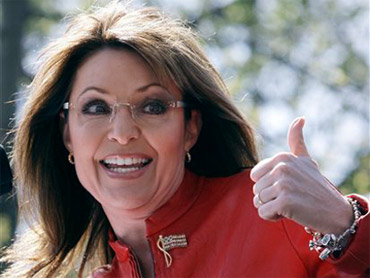 With a few surprising endorsements in recent Republican primaries, the self-styled rogue of GOP politics has reaped an angry response from some of her own supporters and a fresh round of speculation about her own presidential ambitions in 2012.

"I guess you got co-oped by the milk toast moderates. I thought you were better than that," she scolded.

In choosing Branstad, Palin skipped over businessman Bob Vander Plaats, a tea party favorite, in favor of a former governor with a strong chance of returning to office and wielding political power when the Iowa presidential caucuses roll around.

"She's playing her cards, and trying to set herself up" for making a push, should she run, said Dante Scala, an associate professor of political science at the University of New Hampshire who is watching to see who, or whether, Palin endorses in his state.

Palin also backed former Hewlett-Packard chief executive Carly Fiorina in last Tuesday's California Senate primary, and got a backlash on Facebook, a preferred way for Palin to communicate with supporters.

To critics who said Fiorina was a Republican in name only, Palin countered: "Most importantly, Carly is the only conservative in the race who can beat Barbara Boxer. That's no RINO. That's a winner."

For some conservatives, that's also a problem.

While she once thought highly of Palin, Blakely said that over the past two years the "Going Rogue" author has gone more establishment, and Palin's failure to criticize her own party is bothersome. "There's room for criticism (all around)," Blakely said. "If you're not willing to call it where you see it, that's useless."

Blakely said she believes Palin will endorse the most conservative candidate she can. But when there's a party establishment candidate in the running, or one who had some ties with the McCain-Palin 2008 ticket, "she'll go with that," Blakely said. She points to Palin's pick of Fiorina, who is "not conservative", as an example.

"You never really know WHY she's endorsing someone," Blakely said. "It's almost becoming a nonfactor."

Whatever the impact on her wider public, Palin's endorsement translates into crowds and valuable media attention for her preferred candidates, and her message, flowing via her social networks, reaches millions of people.

Arkansas state Sen. Cecile Bledsoe said she was "thrilled" to get Palin's endorsement, even if it came in the last days of a tough congressional primary race that she wound up losing. "It came when it came, and I was glad to get it whenever it came," she said.

She said friends of hers who knew Palin sought an endorsement on her behalf and that she learned of it, shortly before everyone else, with a call from Palin. (At first "It was more me just thinking, Is this REALLY Sarah Palin? Then I heard the cadence of her (speech) and I knew.")

Palin's endorsement is "the Good Housekeeping seal of approval for conservatives," said Julie Soderlund, a Fiorina spokeswoman. But the campaign has yet to decide whether it will seek Palin's help in the fall, when independents and Democrats will be listening.

Even in Republican primaries, it is difficult to gauge the impact of Palin's help.

Three of the four contenders whom she endorsed in last week's round of primaries won, including front-runners Brandstad and Fiorina.

Palin campaigned for the third, South Carolina state Rep. Nikki Haley, who scored an unexpected first place finish in the gubernatorial primary and will compete in a runoff on June 22.

"We need change," said Peggy Brooks, 43, an accountant who voted for Haley. While Brooks considered Palin's support important, she said her vote was motivated more by a desire to stand up against attacks on Haley's character during the race.

"Palin-Heads" Could Fuel Palin Presidential Run
As Women Rise in Politics, Fault Lines Change
Palin to Obama: "What the Heck, Give Me a Call"
Gallery: Sarah Palin in Pictures

Haley faced unproven allegations of an affair. Those claims caused Sara Perry, 63, to change her vote from Haley. Too bad, too: "I love Sarah Palin," Perry said.

Palin campaigned for Haley in South Carolina, one of the few candidates she's taken to the road for. Her involvement turned off A.J. Dance.

He'd been torn between Haley and Democrat Vincent Sheheen but, "When Sarah Palin showed up, I was like, No,"' the unemployed 24-year-old from Columbia, S.C., said. "She's poison."

And some endorsements seem more personal than business.

Palin endorsed long-shot candidate Joe Miller in his effort to unseat GOP Sen. Lisa Murkowski of Alaska, a member of the Senate Republican leadership who would fit Palin's definition of "mama grizzlies."

Like other potential presidential candidates, Palin has donated to Republicans. As of the end of March, her political action committee had given $55,000 to candidates and committees, including Kentucky GOP Senate candidate Rand Paul and Vaughn Ward, an Idaho House hopeful who lost to a tea party favorite last month.

Minnesota Gov. Tim Pawlenty's Freedom First PAC gave $43,600 by March 31. Mitt Romney leads the way, however, as his Free and Strong America PAC gave $147,572 over a period ending in April.