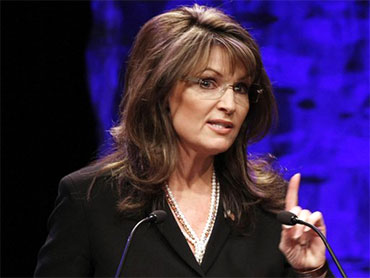 Former Alaska Gov. Sarah Palin called studies supporting global climate change a "bunch of snake oil science" Monday during a rare appearance in California, a state that has been at the forefront of environmental regulations.

Palin spoke before a logging conference in Redding, a town of 90,000 about 160 miles north of the state capital. The media were barred from the event, but The Associated Press bought a $74 ticket to attend.

Palin said California's heavy regulatory environment makes it difficult for businesses to succeed, a point that is shared by many business leaders in the state.

She criticized what she said were heavy-handed environmental laws. As Alaska governor, for example, she said she sued the federal government to overturn the listing of polar bears as a threatened species.

As Alaska North Slope wells dry up, the state is examining offshore drilling for oil and natural gas reserves. Protections for polar bears under the Endangered Species Act could thwart those explorations, according to Palin and her successor, Alaska Gov. Sean Parnell, who has picked up the cause.

Palin told the audience that filled the 2,000-seat Redding Convention Center that she disagreed with the science the government used to support the listing.

"We knew the bottom line ... was ultimately to shut down a lot of our development," she said during her 40-minute speech, which was followed by a 20-minute question-and-answer session. "And it didn't make any sense because it was based on these global warming studies that now we're seeing (is) a bunch of snake oil science."

Palin urged the federal government to allow states to make such decisions for themselves.

Her comments were well-received by the audience members, many of whom brought copies of her book, "Going Rogue," in hopes of getting Palin's signature. A second Palin speech in Redding scheduled for the evening was sold out.

The events were hosted by the Sierra-Cascade Logging Conference.

Palin made her appearance in a state that often has led the nation on environmental regulations, from restricting automobile pollution to greenhouse gas emissions.

The state's Global Warming Solutions Act, which passed in 2006 and has been championed by Republican Gov. Arnold Schwarzenegger, requires greenhouse gas emissions statewide to be cut to 1990 levels by 2020.

But that and other state environmental laws have come under increasing attack from Republican state lawmakers.

Last week, the secretary of state cleared the sponsors of a ballot petition seeking to suspend the 2006 law until the state unemployment rate falls to 5.5 percent and stays there for a year. Republican gubernatorial candidate Meg Whitman has criticized the law as being too much of an economic burden while businesses are trying to recover from the recession.

Palin also weighed in on the Obama administration's efforts to secure a climate change treaty during the international conference held recently in Copenhagen.

She said it was "providential" that President Barack Obama did not return from Denmark with a clear victory after questions arose about figures used in the scientific studies to promote conservation.

"The weather will not change with the proposals," she said.

Palin struck a sympathetic tone with the crowd, saying she shares the timber industry's worries of cumbersome lawsuits by environmental groups.

"California is tough in this respect," Palin said. "Man, it is expensive to do business here and to get anything done ... I do think there's hope though, because more Americans are becoming aware of the absurdity of such a situation. Maybe California is just a little behind the times."

Palin said she believes there's a way to harvest timber without damaging the environment but has grown frustrated by environmental activists who want to "lock up the land."

"We sought to protect the diversity of our forests and our wildlife while sustaining jobs and subsistence for residents of our state," Palin said of her efforts as governor in trying to develop a vision statement for the Tongass National Forest in Alaska. Conservation groups and the U.S. Forest Service have fought for decades over management of the country's largest national forest.

She defended herself as a conservationist.

"We really do love our trees," Palin said. "I named my daughter Willow. Isn't that granola enough for them?"