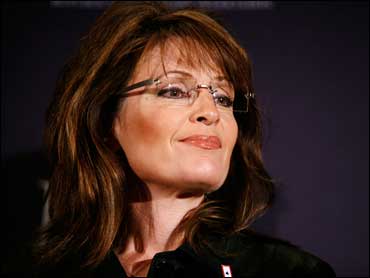 Gov. Sarah Palin, heralded by some conservatives as the future of the Republican Party, faces some cold political realities in present-day Alaska.

Within days of the McCain-Palin ticket's defeat earlier this month, the unsuccessful GOP vice presidential nominee capped her tumultuous two months on the campaign trail with a whirlwind series of national media interviews and a headline-grabbing appearance at the Republican Governors Association meeting in Florida.

Now it's back to her day job at the state capital in Juneau.

Palin's state budget proposal is due in a month, with plummeting oil prices slashing Alaska's revenues by billions of dollars.

Some hard feelings linger over her administration's initial decision to ignore subpoenas in the investigation of whether she abused her power in firing the public safety commissioner who wouldn't oust her ex-brother-in-law from his job as a state trooper.

"The main focus is going to be on the gas line and on the long-term financial issues," said Democratic state Sen. Bill Wielechowski. "You're going to see really a clampdown on government services."

Uncertain is whether the bipartisanship that existed during Palin's 20 months as governor can survive the heated rhetoric from the presidential campaign and her own political ambitions, with the 44-year-old clearly signaling that she's open to a bid for president in 2012.

The difficult task at hand "provides the governor with a great opportunity to roll up her sleeves and get back to her job," said Kenneth Khachigian, a former adviser to President Ronald Reagan. "She's got four or five election cycles ahead of her where she can do things. She doesn't have to comment on 2012 or 2016. Being a good governor is the best thing she can do right now."

Among the challenges she faces:

Alaska has no income or sales tax, and a huge chunk of its annual revenue - as much as 90 percent - comes from taxes and fees on oil companies. When oil prices soar, as they did this summer, so do the state's coffers: Alaska in the past two years has socked away billions in its already massive savings account.

But that account, the $28 billion Alaska Permanent Fund, sends every Alaskan a dividend each year - this year it was $2,069. So tapping its income to pay for government is considered political suicide, and falling oil prices can put big pressure on state spending.

The governor's chief economist is working on a new revenue forecast, and many lawmakers expect the state to drastically reduce spending on such things as road projects.

With overwhelming support from Democrats, Palin awarded a license to TransCanada in August to pursue building a pipeline that would carry natural gas from Alaska's North Slope to an existing pipeline network in Alberta.

Solving that problem will require not only cooperation from the Legislature, but probably from the oil companies Palin has battled. And her claim to being a national leader on energy issues depends on it.

TROOPERGATE AND THE CAMPAIGN:

The episode - and the media spotlight that resulted from Palin's vice presidential nomination - drew attention to practices that simply can't be ignored.

Lawmakers also said they could hold hearings on, and possibly restrict, Palin's practice of charging the state for her children's travel and taking per diem payments for nights spent in her Wasilla home.

Democratic Rep. Les Gara has - without luck - asked the Alaska State Troopers and the Palin's appointed attorney general to investigate whether the McCain-Palin campaign urged anyone to ignore their subpoenas. Under state law, to "induce a witness to be absent" from an official proceeding to which they've been summoned is second-degree witness tampering.

But even Gara, an outspoken critic of Palin, said he doesn't want such matters preoccupying the government.

"There are much more important things in this state than rehashing Troopergate," Gara said. "We all have to sit down and let bygones be bygones, but it's going to take some conversations."