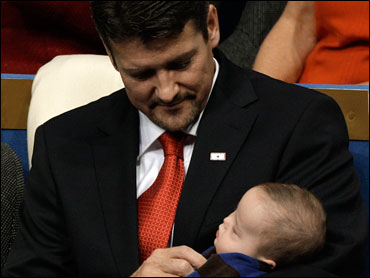 Polishing off his strawberry-banana yogurt, Jacob Moore races to his keyboard with a whoop, picks his way through "Pop Goes the Weasel" and gives his mom a high five. This is the average stuff of childhood, and it has not come easily to the 8-year-old with Down syndrome.

For his mother, Heidi Moore, achieving average "is like climbing Mount Everest." The family has been clambering up with the help of therapists, 15 surgeries, prayer and a tight-knit community of parents whose children live with the disorder.

That network is abuzz with Alaska Gov. Sarah Palin's arrival on the national scene as Republican presidential candidate John McCain's running mate. A little more than four months ago, Palin, 44, gave birth to a son, Trig, with the extra chromosome that causes Down syndrome.

Palin hoisted the sleepy-looking infant into her arms after delivering the biggest speech of her career before cheering delegates at the Republican convention and a television audience of 40 million.

In her address, she had a special message for families with special-needs children: "I pledge to you that if we are elected, you will have a friend and advocate in the White House."

It was an electrifying moment for those parents and their advocates.

Parents of children with Down syndrome say they often feel misunderstood by those who question their decision to have a child with a disability. They said many people fail to realize that medical, educational and legislative advances have dramatically improved life for those born with Down syndrome.

And they hope Palin's example will convince more parents that they, too, can handle the challenge of a Down syndrome child. Up to 90 percent of women who learn their fetus has Down syndrome terminate their pregnancy, studies suggest.

"For the first time, we have a mom in a position like that who's been through the emotions we've been through," said Michelle McCarthy of Ainsworth, Iowa. One of her 8-year-old twins has Down syndrome.

Palin did not say what her White House advocacy would mean.

During her few years as governor, she vetoed $275,000 for Alaska's Special Olympics - half the amount being sought. Money for a program that helps rural school districts provide special education has remained flat. But she supported another legislative proposal to boost spending for students with special needs by some 175 percent in 2011.

Disability advocates said she hasn't been a strong voice for their cause at least not yet.

"It hasn't been on her radar screen," David Fleurant, executive director of the Disability Law Center of Alaska.

Still, many say her value if elected vice president could be less about laws or dollars and more about raising awareness - simply by raising her son in the public eye.

David Tolleson, executive director of the National Down Syndrome Congress, said it was invaluable for people to see the Palins at the convention as "a happy, normal family passing the baby around."

Tolleson said that might resonate with parents who agonize over what to do when they receive a prenatal Down syndrome diagnosis. Advocates worry even more pregnancies might be aborted because of the rise of prenatal testing.

Testing for Down syndrome once was offered routinely only to women age 35 and older. But since 2007, the American College of Obstetricians and Gynecologists has recommended that a choice of tests be offered to all pregnant women regardless of age. Choices range from a blood test-plus-ultrasound option that signals who's at high risk to the definitive diagnosis of amniocentesis.

Women who might not have learned until they gave birth that their child had Down syndrome now can find out in time to choose an abortion early in the pregnancy.

Some 5,500 infants are born with Down syndrome every year, the government says, and an estimated 350,000 Americans live with it. Down syndrome is one of the most common genetic birth defects, affecting roughly one in 800 births. Its severity varies.

Advocates say doctors often don't provide good information to scared, pregnant women who receive a prenatal diagnosis and are too quick to recommend abortion. Congress has come up with money to improve the quality of information for health professionals.

Down syndrome is characterized by mental retardation of varying degrees, and distinct physical features. Babies tend to be limp and quiet. They can have a multitude of other problems: Nearly half will have a heart defect, some serious enough to require surgery soon after birth. About one in 10 are born with intestinal abnormalities that can require surgery.

They also are at increased risk of thyroid problems, hearing loss, vision problems and leukemia. Many develop Alzheimer's-like symptoms starting in their 30s. However, better treatments for some of these conditions have increased the life expectancy of people with Down syndrome to about 55.

Once institutionalized at birth, children with the condition now have access to an array of home therapies, and public schools are legally bound to accommodate them.

Gail Williamson, executive director of the Down Syndrome Association of Los Angeles, said she remembers stares and whispers when her son Blair, now 29, was a child.

She credits the late 1980s television show "Life Goes On," which featured a character with Down syndrome, with helping to change attitudes. She said Palin's visibility could have a similar effect with a new generation.

A former oil industry executive who now works as an advocate on disability issues from her suburban Atlanta home, Moore acknowledges Jacob's surgeries and therapies have drained their bank account, even with help from Medicaid.

But she'd never make another choice.

"Look at my son," she said. "He's reading at an age-appropriate grade level. He's writing his name. He's playing piano," Moore said. "Will he be an astronaut? No. But maybe he'll be a teacher's assistant ... or a musician."

"My hope for him is to be a healthy, happy, productive, taxpaying member of society."