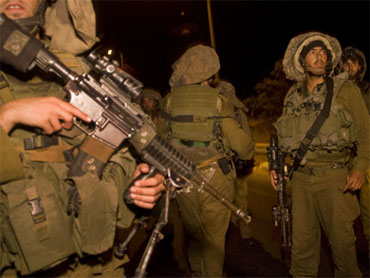 Palestinian gunmen opened fire Tuesday on an Israeli car in the West Bank and killed four passengers on the eve of a new round of Mideast peace talks in Washington. The Islamic militant group Hamas claimed responsibility.

Assailants firing from a passing car riddled the vehicle with bullets as it traveled near Hebron - a volatile city that has been a flash point of violence in the past. Some 500 ultranationalist Jewish settlers live in heavily fortified enclaves in the city amid more than 100,000 Palestinians.

One of the victims was pregnant, said police spokesman Micky Rosenfeld. Israel's national rescue service said the victims were two men and two women, and Israeli media said everyone in the car was killed.

Analysis: How Are These Mideast Talks Different?
Unplugged: Will Talks Bring Peace to Middle East?

Video broadcast live on Israel TV late Tuesday showed a white Subaru station wagon standing at an angle at the side of a road, its windows shot out and its doors dotted with bullet holes. The car was flanked by army and police vehicles and dozens of soldiers.

The attackers fled and Israeli forces set up roadblocks and carried out searches to try to catch them.

About 3,000 people joined a rally in Gaza to celebrate the attack. Hamas military wing spokesman Abu Obeida was among them and told The Associated Press: "The Qassam Brigades announces its full responsibility for the heroic operation in Hebron."

Upon arriving in Washington for this week's talks, Israeli Prime Minister Benjamin Netanyahu condemned the attack and said "terror will not determine Israel's borders or the future of the settlements." Borders and the fate of Jewish settlements on land Palestinians want for a future state are key issues in the negotiations.

President Barack Obama hopes to forge a peace agreement within one year.

Palestinian Prime Minister Salam Fayyad's office issued a statement charging the attack was aimed at undermining his government's effort to build international support for "the Palestinian position and ending the (Israeli) occupation."

Hamas, a fierce rival of the Western-backed Palestinian president, expelled Abbas' forces from Gaza in 2007 and took over the territory. Abbas has been trying to limit the Islamic militants' reach in the West Bank, jailing activists and even cracking down on mosque preachers.

Hamas, responsible for dozens of suicide bombings in Israel, is considered a terrorist group by the U.S., Israel and European Union.

Asked about the shooting, State Department spokesman P.J. Crowley said the U.S. is aware "there are those who will do whatever they can to disrupt or derail the process."

Israeli Defense Minister Ehud Barak promised a tough response to an attack he said was aimed at sabotaging the talks.

"Israel will not allow terrorists to raise their heads and will exact a price from the murderers and those who send them," he said in a statement.

U.N. envoy Robert Serry issued a statement condemning the attack and urging all parties "not to allow the enemies of peace to affect the negotiations about to be launched."

There is widespread opposition to the resumption of the peace talks among Palestinians. Hamas opposes any contact with Israel and has harshly criticized Abbas for agreeing to resume the negotiations.

Opposition to resuming talks is also coming from within the Palestine Liberation Organization, an umbrella group headed by Abbas. Some Fatah activists threaten to try to depose him if he makes concessions, and several hard-line PLO groups plan a demonstration in the West Bank administrative capital of Ramallah on Wednesday to protest resumption of negotiations.

Netanyahu also faces some domestic opposition from elements of his hard-line coalition of religious and nationalist parties. He has said that protecting Israel's security interests will be his top priority in the talks.

Heading into a meeting with Clinton, Netanyahu said in the statement he would tell her, "This criminal murder proves again the need to stand firmly on Israel's stringent security demands, and there will be no compromise on them."

The attack disrupted a relative lull in the West Bank. The last fatal attack occurred in June, when Palestinians opened fire on a police vehicle near Hebron and killed one officer.

It was the deadliest Palestinian attack against Israelis since March 2008, when a lone assailant gunned down eight students in a Jerusalem rabbinical seminary.

A previous U.S. launching of Israeli-Palestinian peace talks was also accompanied by deadly violence. Palestinian gunmen shot and killed an Israeli in the West Bank before then-President George W. Bush convened Israeli and Palestinian leaders for a summit in Annapolis, Maryland, in November 2007. The gunmen said the attack was "an act of protest against the Annapolis conference."

Talking to reporters on his plane heading for Washington, Abbas called for decisive American involvement in the talks.

He said that if the two sides reach a deadlock, the Obama administration should "present bridging proposals to bridge the gap between the two positions."

In one major challenge to the first direct talks between the sides in two years, Abbas warned it would be difficult to continue negotiating if Israel fails to extend a 10-month curb on West Bank settlement construction that ends in late September. Netanyahu has not made a final decision.