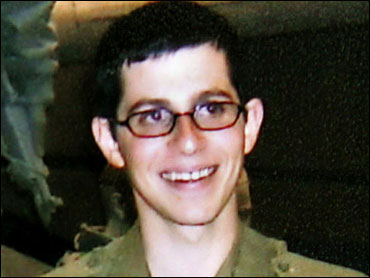 Israeli Prime Minister Ehud Olmert on Monday said he has ordered the army to prepare a "broad" military operation against militants in the Gaza Strip following the kidnapping of an Israeli soldier.

"It should be clear that there will be no immunity to those who are holding him," Olmert said in a speech at a business conference in Jerusalem.

A statement faxed on Monday by Palestinian groups purporting to hold Cpl. Gilad Shalit demanded the release of women and children under 18 held in Israeli prisons in return for information about the man.

The statement was signed by Hamas' military wing, the Saladdin Brigade, and the Army of Islam. The last two groups are offshoots of the small Popular Resistance Committees, which has strong links to Hamas.

Israel has given the Palestinians two days to release a 19-year-old corporal who was kidnapped in a daring attack on an army base near the Gaza Strip. There are no demands yet, reports CBS News correspondent Robert Berger, but militants have often used Israeli hostages as bargaining chips for the release of Palestinian prisoners.

Israel is unlikely to take any action that would harm the soldier, reports Berger. If Israel gets pinpoint intelligence about Shalit's location, it might launch a raid to free him. But Israel is also known to negotiate with kidnappers. In the past it has freed hundreds of Arab prisoners in exchange for a handful of soldiers.

Olmert also said he holds the entire Palestinian leadership responsible for the safety of the soldier, who was seized in a cross-border raid early Sunday.

CBS News correspondent Sheila MacVicar reports there are significant discussions taking place between the Palestinian prime minister, himself a member of Hamas and those militants. The Palestinians know the clock is ticking.

"We urge Prime Minister Olmert to refrain from any military action at a time when President Abbas is exerting maximum efforts in order to acquire the release of the soldier, alive and unharmed," Erekat said.

A spokesman for the Gaza militant group believed to be holding the soldier rejected calls from Palestinian leaders for his release.

The kidnapping is a major intelligence failure for the army, reports Berger. For weeks, the military had been warning that Palestinian militants were planning a major attack in the area. Yet militants were able to dig a 700-yard long tunnel right under the nose of Israeli troops, infiltrate a base and blow up a tank. Six of the eight attackers escaped. The army has launched an investigation.

The Israeli soldier kidnapped by Palestinian militants holds French citizenship, and the French government is working to secure his release, diplomats said Monday.

Yael Avran, spokeswoman for the French Embassy in Tel Aviv, said diplomats are "fully active in order to liberate the soldier." She said French officials in Paris were in touch with Palestinian officials.

France has strong ties with many Arab countries, and the Paris government has recently tried to raise its profile in Mideast peace efforts.

Avran said Shalit gained French citizenship through his paternal grandmother, who moved to Israel from France.

Hamas militants played a leading role in the long-planned attack, casting a shadow over Hamas political leaders' efforts to counter their image as a terrorist group and ease Western sanctions. The attack also came as Hamas and Abbas' moderate Fatah movement have been in talks over a joint program that includes implicit recognition of Israel.

After the attack, Israel closed the vital border crossings, the only way people and goods can enter or exit the territory.

Hamas, which recently resumed its open involvement in rocket fire on Israel, confirmed its participation in the attack. The small Popular Resistance Committees and a previously unknown group, the Islamic Army, also said they participated.

Though considered a single entity by Israel and the West, Hamas has divisions. Its political and military wings are separate, and political leaders outside the West Bank and Gaza are more extreme than some leaders in the territories.

Some analysts said they believed exiled leaders ordered the attack through the military wing, bypassing and undermining the local leadership, which has been working toward a common political front with the moderate Abbas.

One of those leaders, PRC leader Jamal Abu Samhadana, was killed in an Israeli airstrike two weeks ago, shortly after accepting a senior security position in the Hamas-led government.

Sunday's attack was the first ground assault by Palestinian militants since Israel pulled out of Gaza last summer, and the first abduction of an Israeli soldier by Palestinians since 1994.