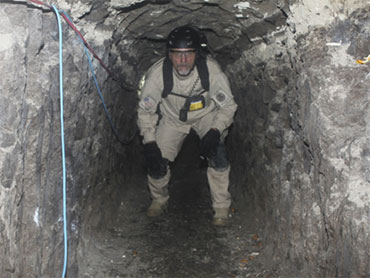 Palestinian security forces and Hamas militants exchanged fire in a crowded Gaza City neighborhood on Friday, and at least two people — possibly bystanders — were killed and 25 wounded in some of the worst fighting among Palestinians in recent years. Palestinian troops were placed on high alert.

Palestinian leader Mahmoud Abbas, struggling to rescue a five-month-old truce, under intense pressure from Israel and the United States to crack down on militants, declared a state of emergency Thursday night, after dozens of Hamas gunmen stormed two Palestinian police posts in the northern Gaza Strip, Israel Television reported.

The pressure intensified after militants killed six Israelis this week, five in a suicide bombing and one in a rocket attack Thursday.

Later Friday, two Hamas members were killed in an explosion in the West Bank, and area residents said Israeli helicopters had fired three or four missiles at the house. The Israeli military had no immediate comment.

The tough Palestinian police action Friday suggested a possible shift in Palestinian policy, though Abbas was reluctant in the past to confront the militants. Palestinian security chief Nasser Yousef said Friday that his forces will "not hesitate" to restore law and order, and ordered rocket attacks into Israel to be stopped by all means.

A defiant Hamas demanded that Abbas fire Yousef, who was a top commander during the bloodiest clash between Hamas and security forces so far — a 1994 confrontation outside a mosque in which 15 Hamas supporters were killed by Palestinian police fire.

Abbas was at his Gaza City office during Friday's fighting, and it was not clear whether he would meet with leaders of militant groups in an effort to defuse tensions. Sakher Bseisso, a Cabinet minister involved in contacts with Hamas in the past, said the militants were leaving Abbas little choice but to crack down.

"Hamas is trying to impose its control on the ground," he said.

A teenager and a child were killed in the fighting, hospital officials said, adding that the victims' exact ages were not available.

At least 25 people were wounded, including six policemen and 19 civilians, hospital officials said. It was not clear whether Hamas gunmen were hurt; the militants were not expected to take their activists to hospitals, for fear of arrest. One young man, his shirt bloodied, was carried away by a group of people.

After heavy exchanges of fire Friday morning, police pulled out of Zeitoun, while masked gunmen took up positions on street corners and rooftops. Hundreds of civilians were in the streets, watching the fighting.

Friday's clashes came just hours after a rocket fired from Gaza killed an Israeli woman and Israel retaliated with helicopter missile strikes on several targets in Gaza. On Friday morning, six more rockets hit in and around the Israeli border town of Sderot, causing no injuries.

If fighting spins out of control, it could endanger Abbas' rule and overshadow the planned Israeli withdrawal from Gaza next month. Israel has said it would not pull out of Gaza under fire.

The cease-fire was the main achievement of Abbas' rule. As long as it held, he was able to defend his policy of coopting the militants, rather than confronting them. However, with the truce increasingly shaky, he is increasingly being pushed to take action.

The confrontations between police and militants began in northern Gaza on Thursday evening, when police said they tried to stop a Hamas squad from firing rockets at nearby Israeli towns. A firefight erupted, and five Hamas militants were wounded.

Later Thursday, in Gaza City, armed and masked Hamas men told reporters that the fighting could escalate into civil war. "We shall cut off the awful hand that attacked our fighters," one of the masked men said in an impromptu outdoor news conference.

When Palestinian police arrived, the militants ran off, some shooting in the air.

Before dawn Friday, Israeli helicopters fired missiles at four targets in three locations in Gaza, including buildings the army said were used for making rockets. The raids were Israel's first concerted action against Hamas, and the most widespread since the truce. No one was hurt.

The strikes came in response to a rocket attack on Nativ Haasara, an Israeli communal farm just outside Gaza. A rocket crashed through a porch roof and killed Dana Glakowitz, 22. Hamas and the Al Aqsa Martyrs' Brigades, a group linked to Hamas' Fatah movement, both claimed responsibility.

The militants said they were retaliating for Israeli military operations. Earlier this week, a Palestinian police officer and a militant were killed by army fire. The army raids came after a suicide bomber from the Islamic Jihad group killed five Israelis in an attack in the coastal city of Netanya.

Hamas has said it is honoring the cease-fire but reserves the right to retaliate for perceived Israeli violations. Israel has renewed its operations against Islamic Jihad, responsible for the Netanya bombing.