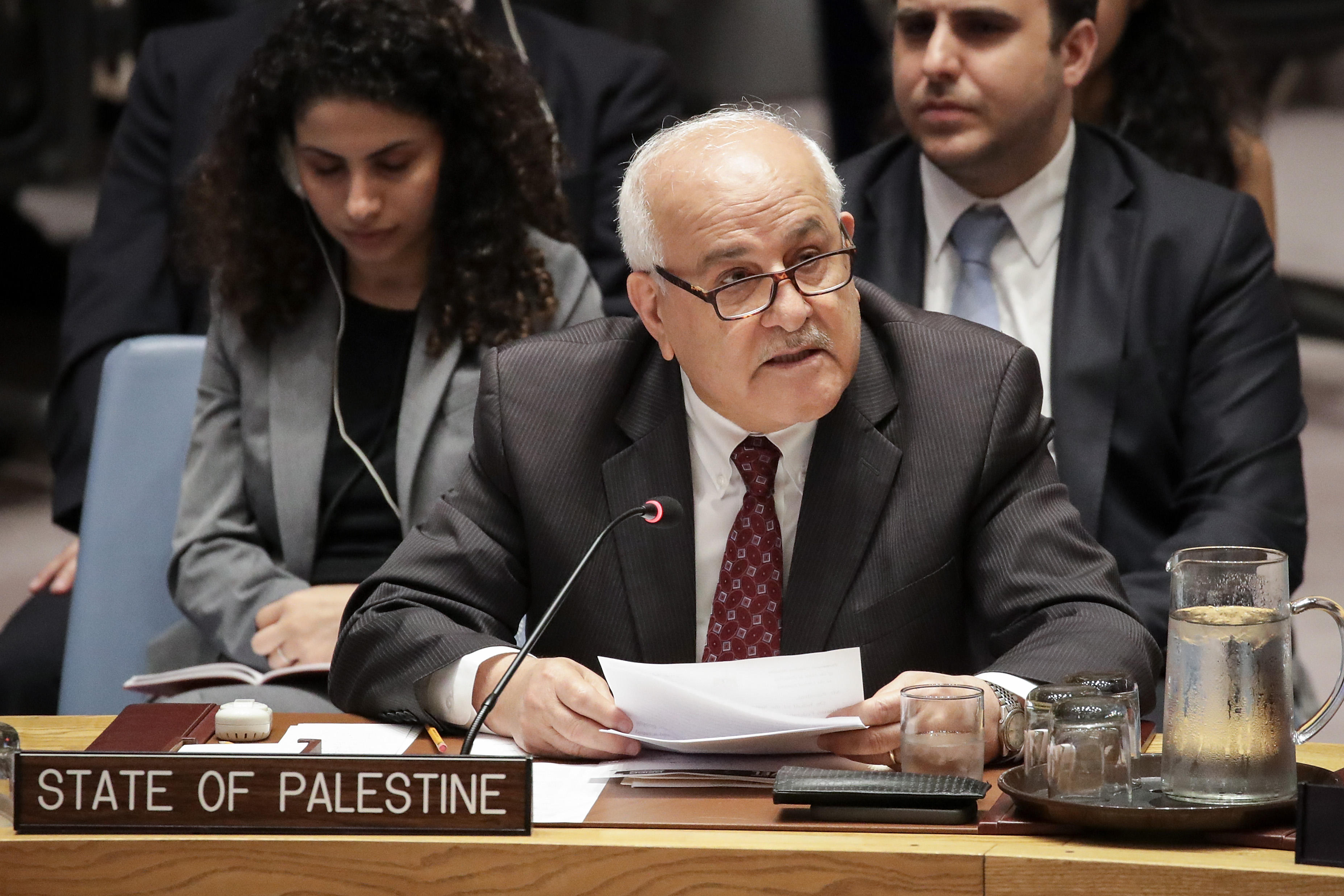 UNITED NATIONS -- The Trump administration's long-awaited plan for Israeli-Palestinian peace is "dead upon arrival," the Palestinian U.N. ambassador said Tuesday. Ambassador Riyad Mansour reiterated the Palestinian leadership's stance that with President Donald Trump's unilateral recognition of Jerusalem as Israel's capital on Dec. 6, the United States "lost the qualification to be the only party to supervise the political process."

U.S. Ambassador Nikki Haley said: "Here at the U.N., thousands of miles away from Palestinians who do have real needs, there is no end to the speeches on their behalf. Country after country claims solidarity with the Palestinian people. If those words were useful in the schools, the hospitals, and the streets of their communities, the Palestinian people would not be facing the desperate conditions we are discussing here today. Talk is cheap."

Mansour laid out his own administration's proposal for a peace agreement, reaffirming the Palestinians' desire for a "two state solution," saying "peace requires two states on 1967 borders," with adjustment to those borders if both sides agree and with East Jerusalem as the capital and "the other part" being the capital of Israel, CBS News' Pamela Falk reports.

He also responded angrily to Haley's dismissal, saying, "she does not spare a moment to unleash something so negative and defending Israel; and in fact she is becoming more Israeli than the Israelis."

President Trump's son-in-law and senior adviser Jared Kushner and White House Middle East envoy Jason Greenblatt, who have been drafting the administration's plan, told the Arabic language Al-Quds newspaper last month that it would be presented soon, with or without input from Palestinian President Mahmoud Abbas.

Mansour said the U.S. is "eager" for Palestinian engagement on the plan, but "we are not going to engage."

The U.N.'s Middle East envoy said Tuesday that Israel and Hamas, the rival group to Abbas' Fatah movement which runs the West Bank, were "minutes away" from another "devastating confrontation" in Gaza on Saturday -- a clash averted after U.N. and Egyptian diplomatic efforts got both sides to "step back from the brink."

Envoy Nickolay Mladenov warned that "unless we begin in earnest the crucial work required to change the current deteriorating dynamics, another explosion is almost a certainty."

Israel's Ambassador Danny Danon told the Council that, "Israel will not tolerate any violation of our sovereignty - not from Syria, not from Gaza, not from any other enemy that threatens our security."

Palestinian Abbas and many other Palestinian officials "have indicated we will not engage in something that was dead upon arrival before even we received it," he said. Mansour echoed that sentiment on Wednesday, saying that the plan was "dead on arrival" because of the its predicted failures to address Palestinian demands on permanent borders, refugees' right to return to their homes, Jerusalem as the capital of a future Palestinian state, and Jewish settlements in Palestinian territory.

"It seems to me that people in Washington, D.C., they still think that, 'we are the only game in town. It's us or nothing,'" Mansour said. "We are not a player to accommodate their desires."

Mansour said the Palestinians will insist on "a collective process" involving many countries to try to end the decades-old Israeli-Palestinian conflict, as Abbas proposed in an address to the Security Council in February.

In such an approach, he said, the United States can "play a role, but they cannot be the only one to supervise this process" following the "illegal and provocative" recognition of Jerusalem as Israel's capital.

Mansour also said the Palestinians don't want to go to negotiations where the U.S. says Jerusalem, refugees, and a two-state solution "are off the table" and "settlements are maybe not on the table, maybe under the table."

—An international conference, as China's U.N. Ambassador Ma Zhaoxu called for Tuesday. Russia has been suggested as a venue.

—Reinvigorating the role of the Quartet of Mideast mediators, the U.S., U.N., Russia and the European Union, and possibly adding other delegations like China and Japan.

—The 15-member Security Council or its five permanent members — the U.S., Russia, China, Britain and France — leading the effort.

"We are open for all these things," Mansour said.

He accused the Trump administration of being pro-Israel, and cited several examples including drastic U.S. cuts in funding for the U.N. agency for Palestinian refugees known as UNRWA. This year, the United States cut some $300 million to UNRWA, leaving the agency in dire financial straits, and is now reviewing some $200 million in assistance for the Palestinians.

"There is an effort by the international community not to abandon UNRWA, and the action of the U.S. administration is about destroying UNRWA," Mansour said.

Haley made no mention of the cuts in her speech to the Security Council Tuesday but accused Arab and Islamic nations of being generous with their words in support of the Palestinians but not opening their wallets.

She said no Arab country comes "anywhere close to what the United States has done" - over $6 billion in bilateral assistance to Palestinians since 1993.

He told the council his government has given "more than $6 billion, with a B, to the Palestinian people over the last two decades in the form of humanitarian development" assistance.

Mansour cited Haley's accusations against Arab and Islamic countries, including some important U.S. allies, saying this was "for the sake of promoting an unconditional defense of Israel" but "not in the interest of the United States, much more in the interest of Israel."

He also cited a failed U.S. and Israeli effort Tuesday to amend a resolution on "the social and economic consequences of the Israeli occupation" to call for Hamas, which rules Gaza, to release two Israeli civilians and the bodies of two Israeli soldiers.