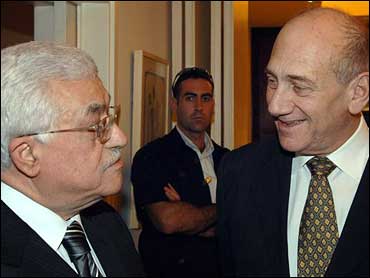 Palestinian President Mahmoud Abbas and Israeli Prime Minister Ehud Olmert are to meet in the coming days in Jerusalem ahead of an expected visit by U.S. Secretary of State Condoleezza Rice and key meetings of international mediators, officials said.

Palestinian officials said Abbas and Olmert would meet on Monday. David Baker, an official in Olmert's office, said the date was not yet final but it could be Monday or Tuesday.

The two leaders last held talks in Jerusalem in August. They have been meeting regularly in recent months as part of a U.S.-backed effort to revive Israeli-Palestinian peacemaking and convene an international peace conference expected in November in Washington.

In preparation, the "Quartet" of Mideast mediators - the United States, the European Union, Russia and the United Nations - is to convene in Washington toward the end of September and meet members of an Arab League committee that has been promoting a pan-Arab plan for peace with Israel.

Senior diplomats say a conference must produce tangible results and Palestinian Prime Minister Salam Fayyad on Saturday asked the U.S. government to be painstaking in its preparations.

The conference should produce "explicit agreement on the establishment of a Palestinian state ... and lay down a binding timetable and international guarantees for the completion of an Israeli-Palestinian agreement," Fayyad told reporters in the West Bank town of Ramallah.

The conference is also meant to boost Abbas, whose Fatah forces were vanquished in Hamas' violent takeover of the Gaza Strip in June.

The exiled leader of Hamas criticized the U.S.-backed conference Saturday, saying Washington was trying to widen divisions between the Palestinians.

"The international conference is a tool to be used by America to impose the U.S. agenda and to embarrass Arabs into taking the side of American policy," Khaled Mashaal told the Hezbollah militant group's Al-Manar television.

But Fatah's former strongman in Gaza, Mohammed Dahlan, said the political split between Gaza and the West Bank was an opportunity for the Israeli-Palestinian peace process.

Dahlan, who resigned as Palestinian national security adviser in July, told a security conference in Geneva he was confident that Palestinians across the political spectrum would support a negotiated settlement with Israel if asked in a referendum.

"What happened in Gaza should not been seen as an excuse to evade the peace process," Dahlan said, adding that the division between the two Palestinian territories represented "an opportunity" rather than a stumbling block on the path toward an agreement with Israel.

While Fatah loyalists in Gaza have been keeping a low profile since the Hamas takeover, there are signs that a comeback could be brewing. With the Gaza economy in tatters and Hamas suffering from an international boycott, its leadership appears to be showing signs of strain while Fatah backers are slowly regaining confidence.

A test could come on Sunday when Fatah and other groups affiliated to the umbrella Palestine Liberation Organization - of which Hamas is not a member - have called a one-day general strike in Gaza to protest against Hamas rule and its heavy-handed clampdown on protesters in the strip on Friday.