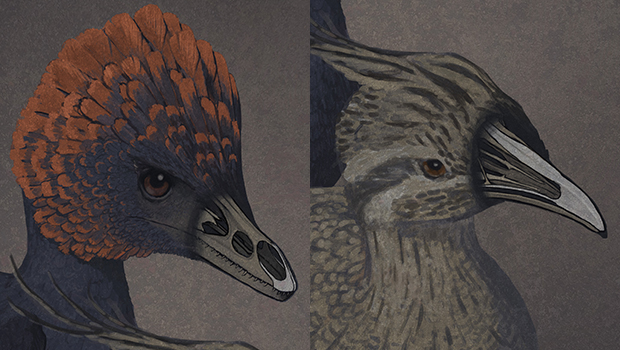 Most scientists trying to understand the evolution of birds depend almost entirely on the fossil record.

The paleontologist at Yale University and University of Chicago is trying to learn more about the evolutionary stepping stones that led from dinosaurs to birds by altering the molecular makeup of modern fowl so they exhibit ancient attributes.

Remarkably, the new research, published this week in the journal Evolution, reveals you can give rise to reptilian snouts simply by inhibiting a select few genes in chickens. Knock out the beak, and a snout pops up in its place.

"The technique allows us to address very dramatic evolutionary changes on a large scale," said Harvard developmental biologist Arhat Abzhanov, a co-leader of the study who has worked on the evolution of birds including Darwin's finches. "By using this combination of understanding morphology, understanding development and being able to do functional experiments, we can take on any interesting questions of evolutionary biology."

Before they reached the lab, the team first did a quantitative analysis of the fossil record to understand the difference in the facial structure between birds and their ancestors. Then they searched for shifts in the gene expression that correlated with this transition, looking at the embryos of birds and reptiles including alligators, lizards and turtles, which are their closest living relatives.

"Birds were distinctive in having an additional patch of gene expression right in the middle of the face which sort of echoes the median bird beak," Bhullar said.

The team "took out the patch" of molecules located in the face from chicken embryos and incubated the eggs. The embryos developed with a snout and palate similar to their dinosaur ancestors, such as Velociraptor and Archaeopteryx.

"Even later on when the skeleton developed, it had ancestral form that looked like a non-bird reptiles," Bhullar said.

In being the first to conduct a successful reversion of a bird's skull features, Bhullar was careful to say their motivation was not to create a "dino-chicken for the sake of it," or to emulate the plot line of the upcoming Hollywood movie "Jurassic World." On the contrary, he prevented any of the manipulated chicks from hatching.

"They could have hatched but we did not hatch them. We had already answered our question at that point," he said. "As soon as we saw that taking out the bird-specific molecular activity, we could generate an ancestral form of the skeleton, we were satisfied with the results."

Bhullar acknowledge that allowing the embryo to reach full term would have carried ethical implications, since they may not have been equipped to survive in the modern world, or perhaps even eat with their modified mouths.

Molecular biologist Jack Horner, who wrote the 2009 book "How to Build a Dinosaur" and is working on his own dino-chicken project at Montana State, called the study "very exciting."

"Neither are really steps toward a Jurassic Park, but do hold promise of us one day being able to retro-engineer a bird back to an animal very similar to an extinct dinosaur," he said of the two projects. "That is not to say we will bring actual dinosaurs back, but that we will create creatures that look like extinct species."

As for ethical concerns, Horner said they would be no different than any others involved with "simple genetic engineering."

"Breeding a Chihuahua from a wolf is an excellent example," he said. "Basically the kind of research published by Bhullar and colleagues is accomplished on one individual embryo at a time, and therefore doesn't change the DNA of a species."

But could this approach lead to a dino-chicken one day walking around a theme park? Not for a while, Bhullar said.

"I would say we are 15 years out from seeing anything like a truly genetically-modified animal that has significant number of non-avian, dinosaur features," he said, adding that one of the bottlenecks is understanding the "very complex gene network behind every feature in birds."

"We looked at two or three genes and there are hundreds probably in just the beak region. We are scratching the surface," he said.