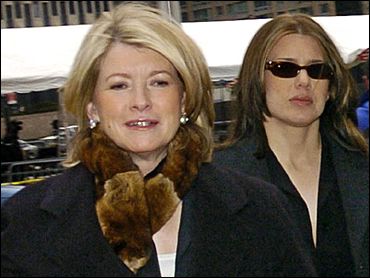 Just days after selling her ImClone Systems stock, Martha Stewart said she knew that ImClone CEO Sam Waksal had been trying to dump his shares in the company, a close friend of the domestic style maven testified Thursday.

The revelation by Mariana Pasternak, a friend of Stewart for more than 20 years, was perhaps the most damaging testimony yet against Stewart, who claims she sold the stock for an entirely different reason.

Pasternak said Stewart told her about the Waksal sale on Dec. 30, 2001, just three days after Stewart sold her 3,928 shares of ImClone. They were on a terrace at a Mexican resort where they were vacationing.

She said Stewart added, "Isn't it nice to have brokers who tell you those things?"

What Stewart knew about Waksal when she sold her stock goes to the heart of the government's case that the homemaking mogul repeatedly lied to investigators in the ImClone probe.

Stewart told investigators she never recalled being tipped that Waksal was selling, and that she sold instead because she and her stockbroker had a pre-arranged agreement to sell Stewart's ImClone shares at a certain price.

Earlier Thursday, a forensics expert testified broker Peter Bacanovic had used a different ink to make a notation next to an entry for ImClone Systems stock on a worksheet of Stewart's stock sales.

The government contends broker Bacanovic made the notation after he and Stewart hatched the false $60 story.

The chief forensic scientist at the U.S. Secret Service, Larry Stewart, who is considered the nation's top expert on ink, said infrared and ultraviolet light tests had confirmed differences between the "(at)60" entry and other marks on the sheet.

"The '(at)60' entry is a different ink than the remaining entries on the document," said the forensic scientist, who is no relation to Martha Stewart.

The worksheet, among the most critical pieces of government evidence in the trial, is a summary of gains and losses in 36 stocks Stewart owned in late 2001 at Merrill Lynch & Co.

Bacanovic made circles, check marks and other notations in blue ink on the document. The "(at)60" mark, also in blue ink, is underlined and appears next to an entry for Stewart's 3,928 shares of ImClone.

Under cross-examination, the ink expert said it was impossible to tell how many pens had been used to mark on the document.

Bacanovic claims he and Stewart struck the $60 agreement days before she sold her stock on Dec. 27, 2001. The next day, the government declined to review an ImClone cancer-fighting drug, sending the stock price into a sharp decline.

The ink expert's testimony gave a detective-novel aspect to a trial that, for four weeks, has dealt heavily in stock charts and arcane financial terms.

Jurors saw photographs of infrared testing on the ink used in Bacanovic's worksheet. Most marks on the sheet appeared black under infrared light, but the "(at)60" notation glowed white.

Larry Stewart testified that ultraviolet-light and chromatography testing had confirmed the inks were distinct. The document was tested in July and August 2002 and was retested in January of this year.

Prosecutors were expected to rest their case Friday.

Martha Stewart lawyer Robert Morvillo indicated to the judge Thursday that he still had not decided whether his client will take the witness stand.

Morvillo planned to ask the judge to dismiss the securities fraud count against Stewart, which charges her with misleading investors in her company, Martha Stewart Living Omnimedia, by claiming her ImClone sale had been proper.

Outside the jury's presence Thursday, U.S. District Judge Miriam Goldman Cedarbaum blocked the government from showing jurors that Stewart haggled over reimbursements from her company for haircuts and other minor expenses.

Prosecutors wanted to raise the issue to head off assertions by Morvillo that the homestyling guru would not have focused closely on her sale of ImClone Systems stock. That sale netted less than $250,000 for Stewart, who once was worth $1 billion.

James Follo, chief financial officer of MSLO, said he and Stewart had disagreed over whether she should be reimbursed for such expenses as being driven to shop for antiques and having her hair done.

He said Stewart also had submitted claims for items as small as coffee and snacks.

Cedarbaum said she would not allow such testimony before the jury because "there are too many things about it that lead down other roads."

"I think it's an elephant bringing forth a mouse," she said.

The judge also blocked Morvillo from arguing in his closing statement that the ImClone sale was "too small for Ms. Stewart to focus on."