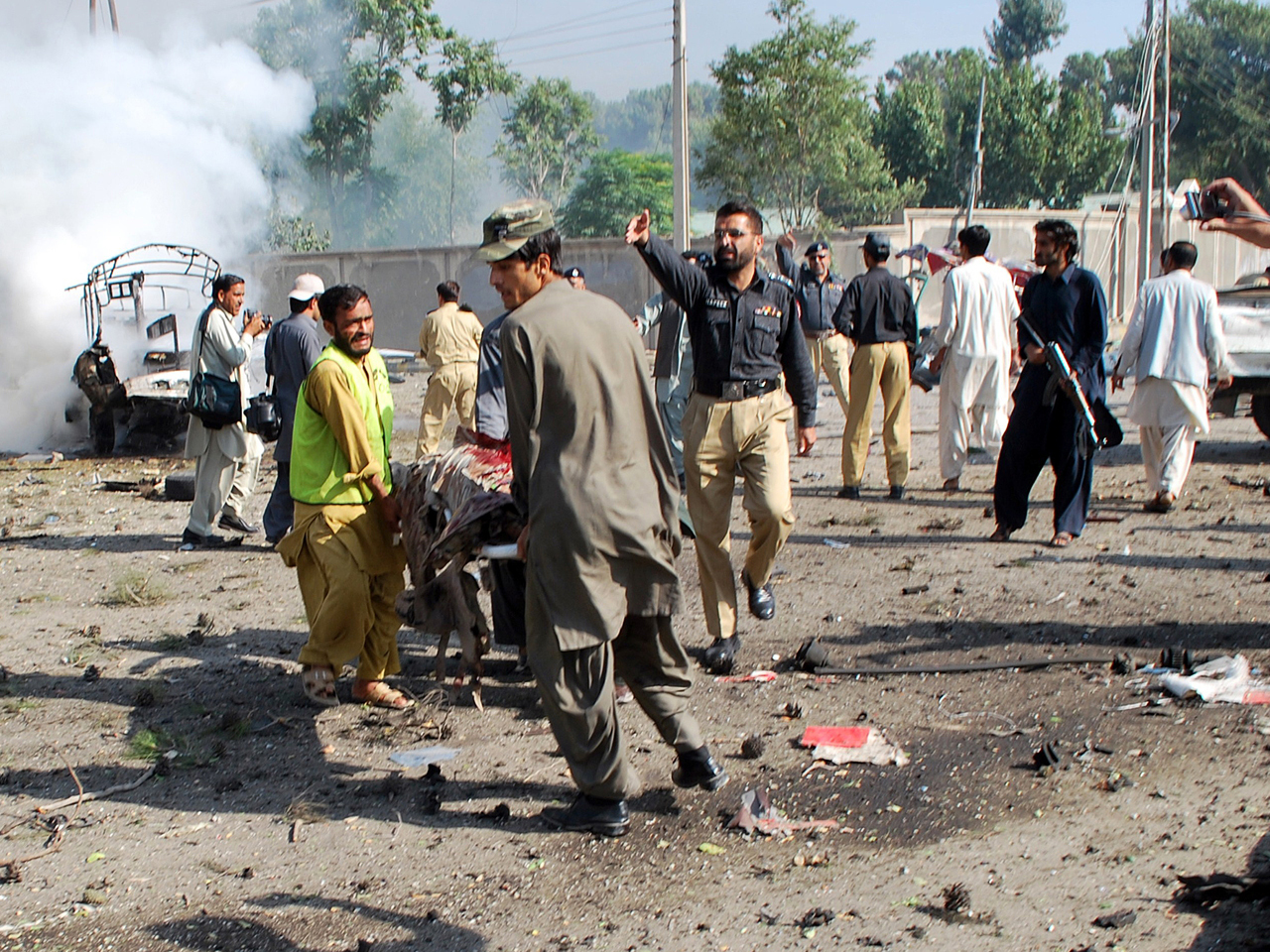 QUETTA, Pakistan - A pair of suicide bombers attacked a top army officer in Pakistan's southwestern city of Quetta on Wednesday, missing him but killing his wife. At least 22 others died, including several guards, a senior officer and two children, officials said.

CBS News' Farhan Bokhari reports that Wednesday's attack comes just three days after Pakistan's army revealed the capture of senior al Qaeda figure Sheikh Yunis Al-Mauritani in a Quetta suburb - an operation assisted by the CIA. Al-Mauritani was reputedly one of the terror network's senior operations chiefs, in charge of planning attacks on economic interests in Europe and the United States.

Police said they were investigating whether the strike was in revenge for the arrests in Quetta.

But a spokesman for the group said Brig. Khurram Shahzad, the deputy head of the region's Frontier Corps, was targeted because of an incident several months ago that left five people dead at a checkpoint in the city.

In Wednesday's blasts, the first attacker detonated his vehicle next to a group of Frontier Corps officers close to Shahzad's house. Hurling grenades, the second attacker than stormed the house and blew himself up inside it, police officer Naseer Ahmed Kurd said.

Police officer Hamid Shakil said at least 23 people were killed and more than 60 were injured.

Two of the dead were children traveling in a rickshaw. A colonel in the corps was also killed, he said.

Shakil said one of the suicide bomber was carrying an identity card showing him to be a 21-year-old Afghan refugee.

The Pakistan army statement announcing the Qaeda arrests had stressed the level of CIA involvement — a possible sign of an upswing in cooperation between two uneasy anti-terror allies after the rancor surrounding Osama bin Laden's killing.

American officials praised the operation, saying the detention of the most senior militant — Younis al-Mauritani — was a significant achievement. The Frontier Corps took part in the operation.

"This attack was maybe in reaction to the recent arrests, but we are investigating," police officer Hamid Shakil said of the Wednesday blasts.

Islamist militants are seeking to topple Pakistan's Western-allied leaders and take over the country.

Allied to the insurgents fighting U.S. forces across the border in Afghanistan, they have attacked hundreds of government, police, army and civilian targets since 2007, when the violence began in earnest. Many thousands have been killed, and Pakistani authorities have struggled to counter the threat.

Quetta is a dangerous city, and is thought to be home to al Qaeda and Taliban leaders. It lies close to the border with southern Afghanistan, the heart of the insurgency in that country. It is also wracked by separatist violence, but those rebels have tended not to deploy suicide bombers.

Pakistan didn't say when al-Mauritani and the two other al Qaeda operatives were arrested but a U.S. official, speaking on condition of anonymity to discuss intelligence matters, has said the arrest took place in the past two weeks.

The unusual announcement about the cooperation between the CIA and Pakistan's Inter-Services Intelligence agency appeared aimed at reversing the widespread perception that ties had been badly damaged by bin Laden's death.

The Pakistanis accused the Americans of violating their sovereignty with the bin Laden raid, while Washington was angry the terror leader had been found in a house in a military garrison town in Pakistan.

"It's a tribute to the Pakistanis, who worked with us on this effort to be able to go after him," Panetta told reporters, adding that he assumes the U.S. will ask the Pakistani authorities for permission to interrogate the suspect.