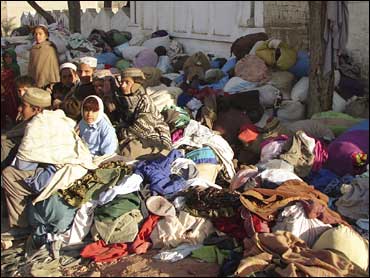 A missile destroyed a suspected militant hide-out in northwestern Pakistan on Tuesday, killing 12 people inside, officials said, as hundreds of students protested Pakistan's support for the U.S.-led war on terror.

In clashes elsewhere in the area, militants killed a government soldier and injured four more.

The air attack occurred after midnight in Khushali Torikhel, a village in North Waziristan, a tribal region bordering Afghanistan, intelligence and government officials in the region said. The two officials spoke on condition of anonymity because they were not authorized to make media comments.

"It was a missile attack," the intelligence official said. He described the victims as "local Taliban."

A spokesman for the Interior Minister said he had no information about the attack in Khushali Torikhel, about 42 miles east of the Afghan border.

Islamic insurgents have stepped up attacks against government troops and officials in the rugged tribal regions, where scores of militants and troops have died in clashes in recent weeks.

The government frequently employs air strikes to attack militants in areas that its ground forces and artillery can't reach.

Some of the aerial attacks near the border in recent years are believed to have been launched by missile-armed drones flying from Afghanistan, but authorities in both countries have routinely denied knowledge of such operations.

Meanwhile, more than 500 people, including many high school and college students, rallied in Miran Shah, the main town in North Waziristan, to demand an end to Pakistan's military cooperation with the United States.

Protest leaders called on the government to end the fighting in the tribal regions, as demonstrators chanted "Death to America."

"The Pakistan army is committing atrocities," said Najib Ullah, a student protester. "They must stop."

In other fighting Tuesday, one soldier was killed in South Waziristan, a neighboring region along the border, the army said in a statement. Twelve insurgents were arrested in the area, it said.

In another area of North Waziristan, four members of the paramilitary Frontier Constabulary were injured when assailants fired several artillery rockets at a military base, said a local intelligence official who spoke on condition of anonymity because he was not authorized to speak to the media.

The mounting violence in the northwest has contributed to the growing unpopularity of President Pervez Musharraf, who returned early Tuesday from a European tour.

The fighting comes a day after gunmen held dozens of students and teachers hostage at a school in a nearby district.

The hostage drama in Bannu, on the border with the tribal area where Tuesday's clashes occurred, ended peacefully after five hours when the hostage-takers were allowed to flee to avoid bloodshed.

The incident underscored the government's fragile grip on Pakistan's borderlands near Afghanistan, where crime is rife and security forces are struggling to contain rising Islamic militancy.