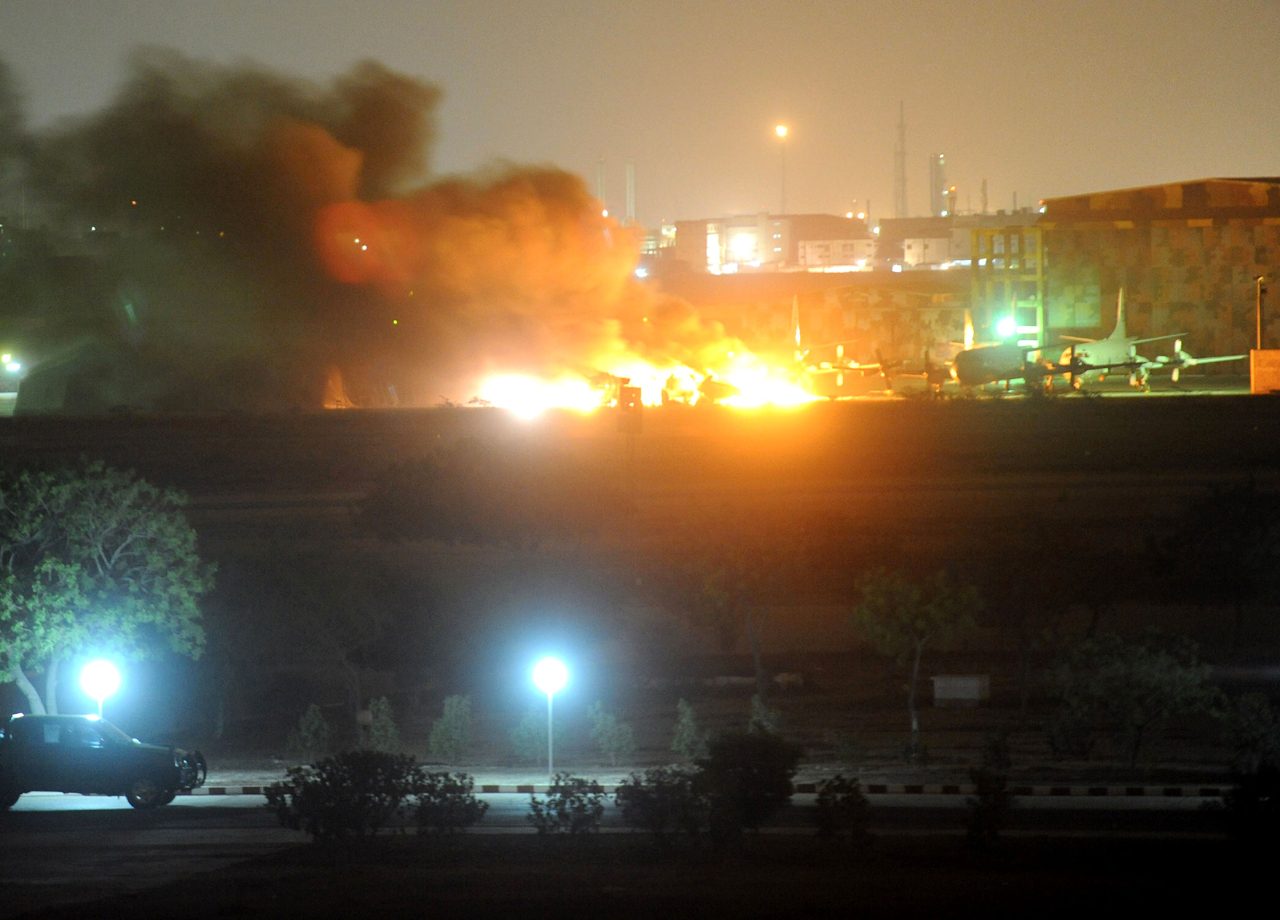 KARACHI, Pakistan - Pakistani commandos regained control of a naval base Monday from a team of Taliban militants who attacked then occupied the high-security facility for 18 hours — an exceptionally audacious act of insurgent violence that dealt a humiliating blow to the military.

The attackers — who may have numbered no more than six — destroyed at least two U.S.-supplied surveillance planes and killed 12 security officers. At least four of the attackers were killed.

The Pakistani Taliban claimed responsibility for the assault in the city of Karachi. The militants said it was revenge for the May 2 American raid that killed al Qaeda chief Osama bin Laden and the insurgents were under orders to fight until the death.

"They do not want to come out alive, they have gone there to embrace martyrdom," said spokesman Ahsanullah Ahsan.

Once inside, they scattered around the compound, setting off explosions and hiding in the sprawling facility.

During the day Monday, the militants were holed up in an office building in a gunbattle with commandos, navy spokesman Irfan ul Haq said. Navy helicopters flew over the base, and snipers were seen on a runway control tower.

By the afternoon, Haq said the militants had been defeated. "Thanks be to God, the base is cleared and the operation is over," he said. Commandos leaving the complex flashed victory signs to reporters.

At least 11 navy personnel and one paramilitary ranger were killed, while 14 security forces were wounded, said Haq. Malik said four militants were killed, but that two possibly escaped.

Malik said he saw some of the bodies of the attackers. He said the were dressed in black and looked "like the Star Wars characters."

Six Americans and 11 Chinese were on the base at the time of the attack, but escaped unharmed, he said.

The insurgents' ability to penetrate the facility rattled a military establishment already embarrassed by the unilateral American raid on bin Laden, and raised the possibility they had inside help.

It will also likely lead to more questions over the safety of Pakistan's nuclear weapons. In 2009, Islamist terrorists stormed army headquarters close to the capital, holding hostages for 22 hours. But unlike the attack Sunday in Karachi, the attackers then failed to deeply penetrate the complex.

The unilateral U.S. raid on bin Laden's compound in the northwest Pakistani garrison city of Abbottabad has triggered a strong backlash here against Washington, as well as rare domestic criticism of the armed forces for failing to detect or prevent the American operation. Pakistani leaders insist they had no idea the al Qaeda boss had been hiding in Abbottabad.

This is the third major attack the group has claimed since the bin Laden killing, including a car bombing that slightly injured American consulate workers in the northwest city of Peshawar and a twin-suicide attack that killed around 90 Pakistani paramilitary police recruits.

Pakistani Prime Minister Yousuf Raza Gilani condemned the attack, saying such a "cowardly act of terror could not deter the commitment of the government and people of Pakistan to fight terrorism."

At least two P-3C Orions, maritime surveillance aircraft given to Pakistan by the U.S., were destroyed, he said. The U.S. Navy puts the cost of the planes at $36 million each.

The United States handed over two Orions to the Pakistani navy at a ceremony at the base in June 2010 attended by 250 Pakistani and American officials, according to the website of the U.S. Central Command. It said by late 2012, Pakistan would have eight of the planes.

U.S. Embassy spokesman Alberto Rodriguez confirmed that six American contractors were on the base during the time of the attack, but said all were safe.

He said the Americans, while working as contractors to help support the P-3C aircraft, did not report to the U.S. Embassy or Consulate. Four of them were part of a Lockheed Martin contract engineering and technical support team, he said.

It was not immediately clear what the Chinese were doing at the base, but Pakistan has purchased Chinese military equipment over the years.

Karachi, a city of around 18 million people, has not been spared the violence sweeping the country, despite being in the south and far from the northwest where militancy is at its strongest. In April, militants bombed three buses taking navy employees to work, killing at least nine people.

The Pakistani Taliban and other militant groups have little direct public support, but the army and the government have struggled to convince the people of the need for armed operations against them. The militants' identification with Islam, strong anti-American rhetoric and support for insurgents in Afghanistan resonates with some in the country.

The strike occurred in Machi Khel area in North Waziristan, a tribal region home to several militant groups attacking U.S. forces in Afghanistan. The U.S. relies heavily on missile strikes to target foes in Pakistan. Pakistan objects to the attacks publicly, but is believed to support them in private.

The two officials spoke on condition of anonymity because they were not authorized to talk to media on record. They did not know the exact identities of the people killed.