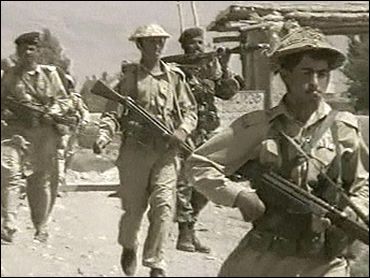 Pakistani security agencies have launched raids across the country since the killing of a key al Qaeda operative over the weekend, arresting a number of suspected Islamic militants, the interior minister said Tuesday.

Aftab Ahmed Khan Sherpao declined to say how many suspects had been rounded up or whether they included any major figures, but said they had ties to the dead man, Amjad Hussain Farooqi.

Farooqi has been accused by the Pakistani government of having a hand in nearly every terrorist attack inside the nation in the past several years, including two assassination attempts on Pakistan's president and the 2002 killing of Wall Street Journal reporter Daniel Pearl.

Farooqi was involved in "almost all major terrorist attacks in the recent years," Sherpao said, adding that Farooqi had close contacts with al Qaeda leaders.

"We are trying to break their network," the interior minister said.

There was no indication that any of those arrested were part of al Qaeda leader Osama bin Laden's inner circle. Bin Laden and his No. 2, Ayman al-Zawahri, are both believed hiding somewhere along the border between Pakistan and Afghanistan.

An intelligence official in Karachi said information yielded from interrogations of three suspects who were arrested during the shootout in which Farooqi was killed on Sunday had led to the capture of 11 other suspected Pakistani militants.

The intelligence official said on condition of anonymity that at least one arrest had been made in Karachi — a hotbed of militancy in southern Pakistan — and two in Rawalpindi, a city near the capital, Islamabad. He gave no more details.

A senior police official said the Karachi arrest was of a close associate of Farooqi but would not identify him. "We are penetrating more and more in their network with every passing day," said the officer, who also did not want to be named.

Officials have already confirmed four arrests in towns in southern Sindh province on Monday, near the town of Nawabshah where Farooqi was killed.

A senior security official in Islamabad said raids were taking place across the country to capture more terrorists, including in Punjab, Sindh and North West Frontier Province. "More arrests are expected," he said on condition of anonymity.

There has been widespread speculation in Pakistan that the government has ramped up anti-terrorism operations ahead of the U.S. presidential election on Nov. 2, seeking to give a boost to President Bush, a major ally of Pakistan President Gen. Pervez Musharraf.

But Sherpao dismissed any such coordination, saying his nation's commitment to fighting terrorism was not connected to external politics.

Pakistan was a supporter of the Taliban for years, but switched allegiance after the Sept. 11 attacks, and has been rewarded with the lifting of sanctions imposed after the country's nuclear tests in 1998 and bloodless coup in 1999.

Mr. Bush has claimed that three-quarters of al Qaeda's key associates and leaders have been killed or captured.