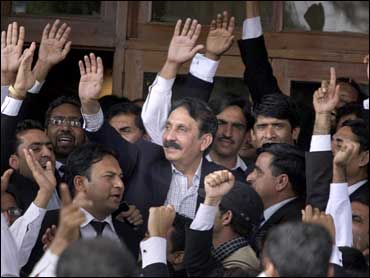 Pakistan's government relented in a major confrontation with the opposition Monday, agreeing to reinstate a fired Supreme Court chief justice whose fate had sparked street fights and raised fears of political instability.

A dawn announcement by the prime minister that Iftikhar Mohammed Chaudhry would be sworn back in on March 21 capped a night of high drama and led activist lawyers to drop plans to march on the capital and stage a sit-in at Parliament later in the day.

CBS News correspondent Richard Roth reports with the march suddenly cancelled, roadblocks were removed from around government buildings, and flower petals showered down on former Prime Minister Nawaz Sharif, who emerged as a hero in the protest movement.

The remark was a clear signal of U.S. approval - or relief.

In the three days prior to the reversal on Chaudhry, Pakistani officials tell CBS News' Farhan Bokhari that Secretary of State Hilary Clinton and Ambassador Richard Holbrooke, President Obama's special envoy to Pakistan and Afghanistan, had spoken to President Asif Ali Zardari, urging him to be more conciliatory.

Despite America's satisfaction, the move was a significant concession that could weaken U.S.-allied President Zardari, who had long refused to restore the independent-minded Chaudhry despite demands by lawyers and Sharif, now a prominent opposition leader. Already, attempts to quell the protest movement - through arrests and bans on rallies - have triggered cracks in the ruling party.

Prime Minister Yousuf Raza Gilani's announcement also promised the restoration of a handful of other judges who had remained off the bench since former President Pervez Musharraf sacked them in 2007. He further ordered the release of activists arrested over the past week and appealed for political reconciliation in Pakistan, a nuclear-armed nation that also faces an economic crisis.

Jubilant supporters waved flags and cheered outside Chaudhry's Islamabad home, and the grinning jurist briefly made an appearance on the balcony. Activists said the decision was a triumph for democracy, and the nation's stock market rallied in the morning.

"No country can progress without an independent judiciary and the government - by restoring the chief justice and other judges - has also realized it, and we think it is a big success," said Ali Ahmad Kurd, a leader of the protesting lawyers.

The concession came as thousands of protesters led by Sharif, a former prime minister and the head of the largest opposition party, were traveling to Islamabad to join the planned sit-in. Sharif joined the convoy after ignoring a house arrest order in his hometown of Lahore in Punjab province, where his supporters fought police.

Sharif thanked Zardari and Gilani after the announcement, but signaled his seemingly strengthened position by focusing on the future.

"From here, God willing, the fate of this nation will change," Sharif said, using a microphone from inside his jeep in Gujranwala as supporters mobbed it. "From here, a journey of development will start. From here, a revolution will come."

Musharraf fired Chaudhry in 2007 after he took up cases challenging his rule, sparking a wave of protests that helped force the military ruler from office in 2008. Overall, Musharraf sacked some 60 judges. Most have already been reinstated.

Zardari pledged to restore Chaudhry within 30 days of his party forming a government in spring 2008. But he reneged, apparently fearing Chaudhry might examine a deal that Zardari and his wife, slain politician Benazir Bhutto, struck with Musharraf to grant the pair immunity from prosecution over alleged corruption.

Zardari aide Farahnaz Ispahani said Monday the prime minister "recognized the mood of the people" and "agreed that it was in the country's best interest for stability" to restore Chaudhry.

She said the matter had languished because the government had more pressing concerns - including reviving the economy and tackling the terror threat.

Sharif initially entered into a coalition government with Zardari's party but switched to the opposition over the judges' issue.

Last month, the Supreme Court ruled that Sharif and his brother Shahbaz were ineligible for elected office. Zardari then dismissed the government led by Shahbaz in Punjab, the most powerful Pakistani province.

A furious Sharif accused Zardari of a power grab and urged his supporters to join lawyers and other activists planning to march on the capital, re-energizing what had been a limping movement.

Gilani repeated a pledge made Saturday to appeal the verdict over the Sharif's eligibility to the Supreme Court.

The Zardari-Sharif showdown raised the prospect of a military intervention in a country prone to military coups. The powerful army chief, Gen. Ashfaq Parvez Kayani, met with Zardari - who has stayed largely out of public view in recent weeks - as the crisis unfolded over the past few days, though officials would not detail their discussion.

Western capitals were concerned the crisis was distracting Pakistan from its fight against Taliban and al Qaeda militants operating along the Afghan border. U.S. Secretary of State Hillary Rodham Clinton had urged Zardari and Sharif to strike a deal.

"This is a statesmanlike decision taken to defuse a serious confrontation, and the apparent removal of this long-standing national issue is a substantial step towards national reconciliation," it said.

For days, the government tried to thwart the protest march - banning rallies, detaining hundreds of activists, putting the army on alert, and barricading the capital. The moves, which sparked clashes between Sharif supporters and police over the weekend, echoed Musharraf's responses to the lawyers' back in 2007.