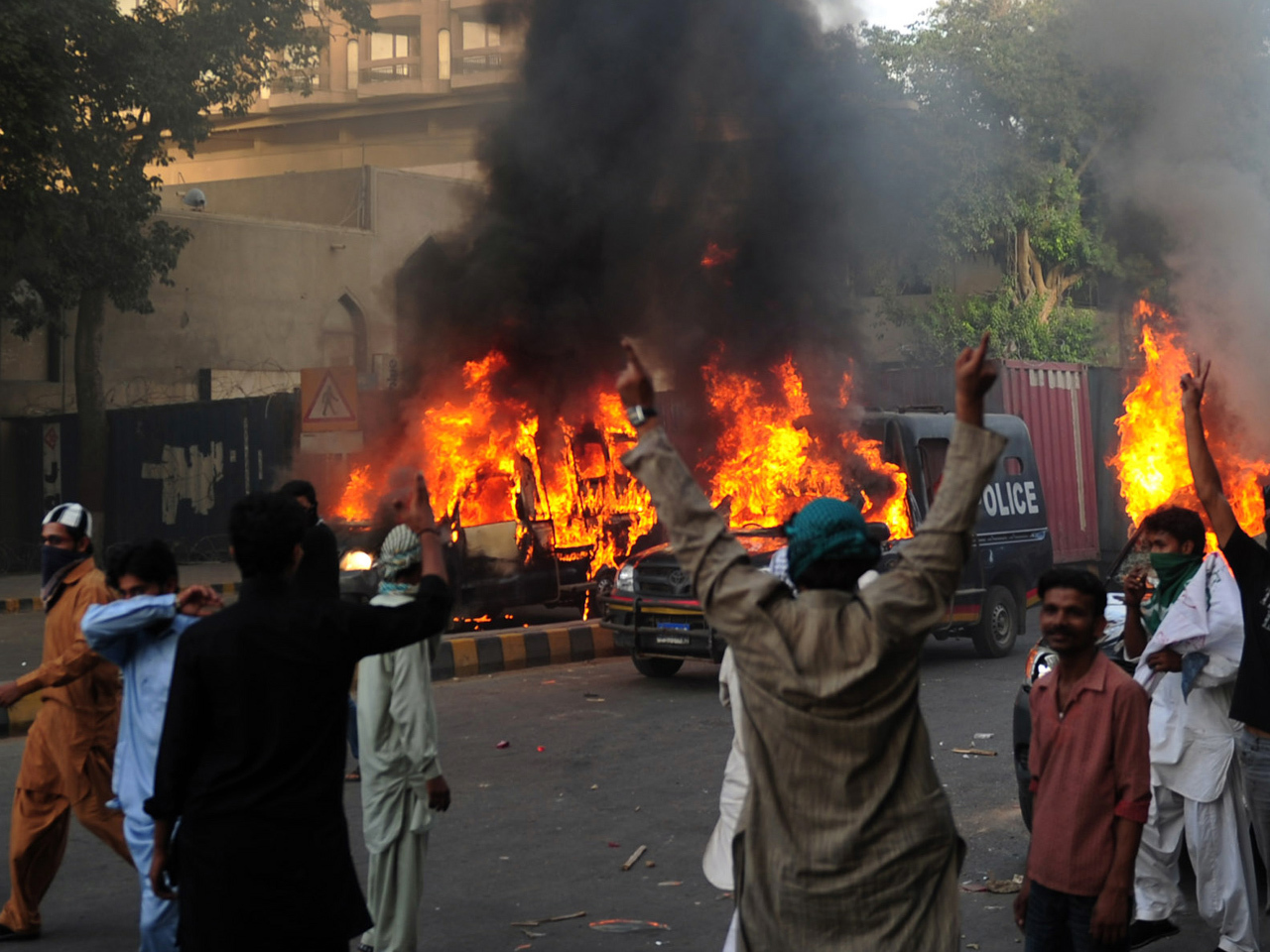 (CBS/AP) ISLAMABAD - Pakistan's "Day of Love for the Prophet" turned into a deadly day of gunfire, tear gas and arson.

Thousands angered by an anti-Muslim film ignored pleas for peaceful rallies and rampaged in several Pakistani cities Friday in battles with police that killed 19 people and touched off criticism of a government decision to declare a national holiday to proclaim devotion for the Prophet Muhammad.

The film, which was produced in the United States and denigrates the prophet, has outraged many in the Muslim world in the 10 days since it attracted attention on the Internet, and there were new, mostly peaceful protest marches in a half-dozen countries from Asia to the Middle East.

But it is Pakistan that has seen the most sustained violence, driven by a deep well of anti-American sentiment and a strong cadre of hard-line Islamists who benefit from stoking anger at the U.S. At 49 people -- including the U.S. ambassador to Libya -- have died in violence linked to the film around the world.

Analysts accused the Pakistani government of pandering to these extremists by declaring Friday to be an official holiday -- calling it a "Day of Love for the Prophet." Officials urged peaceful protests, but critics said the move helped unleash the worst violence yet caused by the film, titled "Innocence of Muslims."

In addition to those killed, nearly 200 others were injured as mobs threw stones and set fire to cars and movie theaters, and battled with police who responded with tear gas and gunfire.

"The people were just waiting for a trigger," said Imtiaz Gul, director of the Islamabad-based Center for Research and Security Studies.

In an attempt to tamp down the anger, the U.S. Embassy in Islamabad purchased spots on Pakistani TV on Thursday that featured denunciations of the video by President Barack Obama and Secretary of State Hillary Rodham Clinton. But their comments, which were subtitled in Urdu, the main Pakistani language, apparently did little to moderate the outrage that filled the country's streets.

Police fired tear gas and live ammunition to push back the tens of thousands of protesters they faced in Pakistan's capital, Islamabad, and the major cities of Lahore, Karachi and Peshawar. They were successful in preventing the protesters from reaching U.S. diplomatic offices in the cities, even though the demonstrators streamed over shipping containers set up on major roads to block their path.

The demonstrators, who were led by hard-line Islamist groups, hurled rocks at the police and set fire to their vehicles. They also ransacked and burned banks, shops, cinemas and Western fast-food restaurants such as KFC and Pizza Hut.

Clinton thanked the Pakistani government for protecting the U.S. missions in the country and lamented the deaths in the protests.

"The violence we have seen cannot be tolerated," she said, speaking alongside Pakistani Foreign Minister Hina Rabbani Khar in Washington. "There is no justification for violence."

Khar thanked Obama and Clinton for speaking out against the video, saying it sent "a strong message, and that message should go a long way to ending the violence on many streets on the world."

The deadliest violence occurred in the southern port city of Karachi, where 14 people were killed, said hospital officials. More than 80 people were injured, said the top government official in the city, Roshan Ali Shaikh. At least three of the dead were policemen, one who died when hundreds of protesters attacked a police station.

"We are all ready to die for Prophet Muhammad," said Karachi protester Mohammad Arshad. "We want to show the world that Muslims are one and united on the issue."

One of the dead was identified as Mohammad Amir, a driver for a Pakistani TV station who was killed when police fired at protesters torching a cinema and hit his vehicle, said Kashif Mahmood, a reporter for ARY TV who also was in the car. The TV channel showed doctors at a hospital trying unsuccessfully to save Amir's life.

At least 45 people, including 28 protesters and 17 policemen were wounded in clashes in Islamabad, where police fought with more than 10,000 demonstrators in front of a five-star hotel near the diplomatic enclave where the U.S. Embassy and other foreign missions are located. A military helicopter buzzed overhead as the sound of tear gas being fired echoed across the city.

In northwestern Pakistan, demonstrators burned the Sarhadi Lutheran Church in the city of Mardan, but no one was injured, said senior police officer Salim Khan

The government temporarily blocked cellphone service in 15 major cities to prevent militants from using phones to detonate bombs during the protests, said an Interior Ministry official, speaking on condition of anonymity because he was not authorized to talk to the media. Blocking cellphones also had the benefit of making it harder for people to organize protests.

Pakistani Prime Minister Raja Pervaiz Ashraf urged the international community to pass laws to prevent people from insulting the prophet, and the Foreign Ministry summoned the U.S. charge d'affaires in Islamabad, Richard Hoagland, over the film.

"If denying the Holocaust is a crime, then is it not fair and legitimate for a Muslim to demand that denigrating and demeaning Islam's holiest personality is no less than a crime?" Ashraf said in a speech to religious scholars and international diplomats in Islamabad.

Denying the Holocaust is a crime in Germany, but not in the U.S.

U.S. officials have tried to explain to the Muslim world how they strongly disagree with the anti-Islam film but have no ability to block it because of free speech guarantees.

Khar, the foreign minister, said in an interview with The Associated Press on Thursday that declaring a national holiday for Friday would motivate the peaceful majority to demonstrate their love for the prophet and not allow extremists to turn it into a show of anti-American anger.

Interior Minister Rehman Malik defended the decision, saying the holiday made it easier for police to tackle protesters in Islamabad because the city was empty of people who normally commute there to go to work or school.

But Riffat Hussain, a professor at the Islamabad-based National Defense University, said the government mismanaged the situation by calling for people to demonstrate and not providing a venue to do so peacefully, such as a rally with religious and political leaders.

"The government thought that they were guiding the public sentiment," Hussain said. "In doing that they lost control."

Pakistan diplomat to U.S.: "Lay off our Prophet"

In the latest edition of "Flash Points," CBS News senior national security analyst Juan Zarate and correspondent Bob Orr discuss the attack on the U.S. consulate in Benghazi, Libya, and the continuing anti-American protests throughout the Muslim world.

Elsewhere on Friday, about 3,000 protesters in the southern Iraq city of Basra condemned the film and caricatures of the prophet that were published in a French satirical weekly. They burned Israeli and U.S. flags and raised a banner that read: "We condemn the offenses made against the prophet."

On Friday, Tunisian Foreign Minister Rafik Abdessalem apologized to Secretary of State Clinton for protesters storming the U.S. Embassy in Tunisia last week, offered condolences for the loss of American lives at the hands of extremists in Libya and emphasized the Tunisian government's dedication to protecting U.S. personnel working in his country.

Clinton called for government leaders worldwide to reject violence and uphold consequences for those responsible for attacks.

"Those extremists - not only in Tunisia, but in too many places around the world - look for the opportunities to exploit this current situation or other situations, and all people and leaders must stand against them," she said.

U.S. flags and effigies of Obama were burned by about 2,000 people in a protest following Friday prayers in the Sri Lankan capital of Colombo. They demanded that the United States ban the film.

In Bangladesh, more than 2,000 people marched in the capital, Dhaka, and burned a makeshift coffin draped in an American flag with an effigy of Obama. Small and mostly orderly protests were also held in Malaysia and Indonesia.

Tens of thousands of supporters of the Shiite Hezbollah movement held a raucous protest in the eastern Lebanese city of Baalbek. Later, a few thousand supporters of a hard-line Sunni cleric gathered in the capital, Beirut. Both demonstrations directed outrage at the U.S. and Israel over what they believed was a grave insult to Muhammad.

Police clamped a daylong curfew in parts of Indian-controlled Kashmir's main city of Srinagar and chased away protesters opposing the anti-Islam film. Authorities in the region also temporarily blocked cellphone and Internet services to prevent viewing the film clips.

Iranian President Mahmoud Ahmadinejad lashed out at the West over the film and the caricatures in the French weekly, Charlie Hebdo.

"In return for (allowing) the ugliest insults to the divine messenger, they -- the West -- raise the slogan of respect for freedom of speech," Ahmadinejad said at a speech in Tehran. He said this explanation was "clearly a deception."

In Germany, the Interior Ministry said it was postponing a poster campaign aimed at countering radical Islam among young people due to tensions caused by the online video.