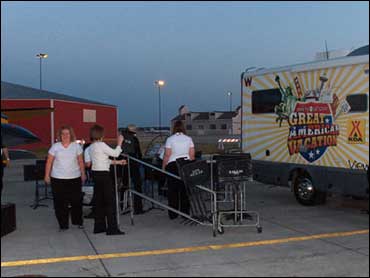 Pakistani police opened fire on pro-Taliban protesters on Friday, killing three people, as part of a nationwide crackdown on a general strike called by Islamic parties against government support for the war on Afghanistan.

"The people have dispersed but there is still tension in the area as people are very angry," said Dr Khalil ur Rehman Lund at the Rural Health Center there.

The deadly violence broke out when about 1,000 protesters blocked a railway track and the main highway running through the city, 300 miles south of the capital Islamabad. The protesters placed large rocks on the highway, and sat on the rail line, and then threw stones and fired shots when police tried to remove them, authorities said.

Police responded with live fire, killing three protesters, according to Deputy Mayor Hafiz Khalid. All three were members of Jamiat Ulema-e-Islam, a radical Islamic movement, whose leader Fazle ur-Rehman is being detained in a government guest house.

The Afghan Defense Council, an alliance of 35 Islamic groups, organized the strike to denounce President Pervez Musharraf and to express support for Afghanistan's ruling Taliban movement.

Maulana Samiul Haq, head of the council, speaking in the northwestern city of Peshawar, told several thousand demonstrators that if Musharraf did not end Pakistan's support, "we will launch (a) civil disobedience movement." Haq runs an Islamic seminary near Peshawar which many Taliban leaders attended when they were war refugees in Pakistan.

In the volatile port city of Karachi, police fired tear gas to disperse some 2,000 demonstrators who were throwing stones and tried to block main roads.

The streets of the southwestern city of Quetta near the Afghan border were deserted, in contrast to the usual traffic chaos. Most vehicles on the road were pick-ups laden with armed police and militia, witnesses said.

Authorities arrested an estimated 500 activists throughout the country in overnight raids in an attempt to limit the scale of the protests. Those detained were expected to be released Friday evening after the threat of unrest receded, the officials added.

Islamic groups have been staging protests every Friday for the past two months. Shortly after the Sept. 11 terror attacks in the United States, Pakistani President Pervez Musharraf abandoned Pakistan's support for the Taliban and sided with the United States in its fight against global terrorism.

Several of the early protests were violent, but they have been peaceful in recent weeks, and the size of the crowds has diminished.

Islamic groups vowed that Friday's strike would be a nationwide action that would shut down the country's largest cities. The overall effect was difficult to gauge — government offices and schools, along with some businesses, ordinarily shut down after midday prayes on Friday, the Muslim Sabbath.

Musharraf is due to arrive in the United States on Friday after a visit to Europe. Musharraf said in Paris on Thursday he would try to persuade President George W. Bush in their meeting on Saturday to suspend the bombing of Afghanistan during Ramadan. The United States has said it will continue its raids.