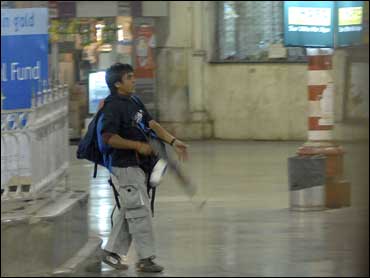 Pakistan charged seven men in last year's Mumbai attacks on Wednesday, its first indictment in a case being monitored by India and the United States to see if Islamabad makes good on promises to bring those responsible to justice.

Despite a crackdown in the months following the attacks, analysts say Lashkar-e-Taiba, the Pakistani militant group blamed for the three-day assault on the financial center that killed 166 people, remains active and largely untouched by Pakistani authorities.

The Mumbai attacks halted a slow-moving peace process between Pakistan and India — which have fought three wars since gaining independence from Britain in 1947 — aimed at resolving their core dispute over Kahsmir, which they both claim. India says Pakistan must crack down on militants before talks can resume.

The charges were announced in a closed door court located inside a high-security prison in Rawalpindi, near the capital Islamabad, on the eve of the first anniversary of the attacks. They came after months of delays in the trial. A judge adjourned proceedings until Dec. 5, when prosecutors will present their opening arguments.

Indian Prime Minister Manmohan Singh later issued a strong warning to Pakistan, saying it must do more to punish those behind the attacks. India has sent Pakistan dossiers of what it says is evidence linking Pakistani nationals with the attack, including Lashkar-e-Taiba founder Hafiz Mohammed Saeed, who remains free.

"Such forces should have no doubt that they will fail in their nefarious attempts," Singh said in Washington.

Washington is pressing Islamabad to turn away from its traditional enemy India and focus more on its fight against the Taliban and other extremists along the Afghan-Pakistani border. That effort has shown recent progress as Pakistan's army wages a major offensive on its northwestern frontier with Afghanistan, but the Taliban is just one of numerous Islamic militant groups in Pakistan.

Two of the defendants, Zaki-ur-Rehman Lakhvi and Zarrar Shah, have been publicly accused by India of masterminding the attacks. They were arrested in December, while the other five were detained in subsequent months.

The men, who could face the death penalty if convicted, pleaded not guilty to charges of planning and helping to execute the attack, defense lawyer Shahbaz Rajput and prosecutor Malik Rab Nawaz said.

Lashkar-e-Taiba is alleged to have sent 10 gunmen to Mumbai to attack luxury hotels, a busy train station and other sites, including the Chabad House — a once-popular site with Jewish travelers where six foreigners were killed.

According to testimony in that trial, the group of attackers landed in Mumbai after setting sail from the Pakistani port city of Karachi. They are alleged to have kept in contact with handlers in Pakistan during the siege via telephone.

Under heavy international pressure, Islamabad has admitted much of the Mumbai plot originated on its soil and cracked down on militant training camps in its portion of Kashmir.

But Pakistan's security agencies have a long history of supporting Lashkar and other militant groups as proxies against the much larger Indian army in the disputed region of Kashmir. Islamabad says it no longer does this, but many powerful Pakistani politicians and army officers are believed to remain sympathetic to the anti-India cause.

"I think Mumbai has made some things more difficult for Lashkar but has not seriously impeded its ability to operate," said Stephen Tankel, who is writing a book on the group.

Pakistani authorities have defended their efforts, saying both Lashkar and its front group Jamaat-ud-Dawa have been banned and U.N. sanctions imposed.

But analysts say the efforts have done little to curb the group's popularity.

"You don't see them flaunting their capabilities, but there is no indicator that they have weakened," said Pakistani military analyst Ayesha Siddiqa.

Lashkar-e-Taiba, which means Army of the Pure, was established in the early 1990s to reclaim territories it views as Muslim land, primarily the Indian-ruled portion of Kashmir. The territory is split between the two nuclear-armed rivals, and both claim it in its entirety.

The group has come under renewed focus since it was linked to a U.S. terrorism investigation following last month's arrests of David Coleman Headley, 49, and Tahawwur Hussain Rana, 48, in Chicago.

Lashkar-e-Taiba has denied any link to the two men.

The two men are accused of plotting with two unidentified Lashkar-e-Taiba associates, including a senior operative, and Pakistan-based al Qaeda commander Ilyas Kashmiri to kill an editor and a cartoonist at Danish paper Jyllands-Posten. The paper published cartoons in 2005 depicting the Prophet Muhammad that ignited outrage in much of the Muslim world.

The alleged involvement of Lashkar operatives in the plot has raised fears that the extremist group is considering attacks on Western targets as well as India — or providing support to other groups doing so.

"It has grown from a very regional group physically focused on Kashmir to a group with ties to Afghanistan and al Qaeda," said Rick Nelson, a counterterrorism expert at the Center for Strategic and International Studies. "As it gains in momentum, as it gains in popularity, as it gains in success, it's going to invariably gain a more global following."