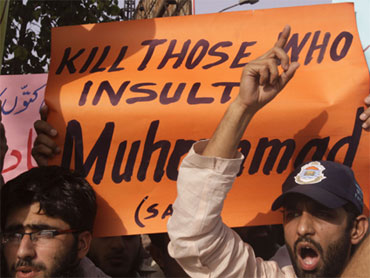 The Pakistani government blocked access to YouTube on Thursday because of "sacrilegious" content in a growing Internet crackdown against sites deemed offensive to the country's majority Muslim population.

The move against the video-sharing website came a day after the government blocked access to Facebook amid anger over a page on the social networking site that encourages users to post images of Islam's Prophet Muhammad. Islam prohibits any images of the prophet.

The Pakistan Telecommunications Authority did not point to specific material on YouTube that prompted it to block the site, only citing "growing sacrilegious contents." The government acted against both Facebook and YouTube after it failed to persuade the websites to remove the "derogatory material," the regulatory body said in a statement.

It welcomed representatives from the two websites to contact the Pakistani government to resolve the dispute in a way that "ensures religious harmony and respect."

The regulatory body said it has blocked more than 450 Internet links containing offensive material, but it is unclear how many of the links were blocked in the last two days.

Access to the online encyclopedia site Wikipedia also was restricted Thursday, but it was not clear if the government had intended to do so. The head of the Pakistani telecommunications company Nayatel, Wahajus Siraj, said the restriction resulted from a technical glitch.

The government blocked Facebook on Wednesday after a group of Islamic lawyers won a court order requiring officials to restrict access to the site until May 31. It was unclear if the ban against YouTube also would be temporary.

The Facebook page "Everybody Draw Mohammed Day!" encourages users to post images of the prophet on May 20 to protest threats made by a radical Muslim group against the creators of the animated American television series "South Park" for depicting Muhammad in a bear suit during an episode earlier this year.

The page sparked protests from radical students in Pakistan, with some holding signs urging Islamic holy war against those who blaspheme the prophet.

"Public sentiment has been growing," said Siraj, the Nayatel CEO. "The government was monitoring it and there seemed to be public unrest, so it had to take a decision."

A series of cartoons of the prophet published in a Danish newspaper in 2005 sparked violent protests by Muslims around the world, including in Pakistan, and death threats against the cartoonists.

In an attempt to respond to public anger over the Facebook dispute, the Pakistani government ordered Internet service providers in the country to block the controversial page Tuesday.

But members of the Islamic Lawyers Forum asked the Lahore High Court on Wednesday to order the government to fully block Facebook because it allowed the page to be posted in the first place.

"Such malicious and insulting attacks hurt the sentiments of Muslims around the world and cannot be accepted under the garb of freedom of expression," Foreign Ministry spokesman Abdul Basit said Thursday, referring to the images of the prophet on Facebook.

"While the content does not violate our terms, we do understand it may not be legal in some countries," the company said in a statement. "In cases like this, the approach is sometimes to restrict certain content from being shown in specific countries."

Online reaction to the Facebook ban was supportive in the initial hours after it was implemented. But comments on Twitter — which was still unblocked Thursday and drawing new users thanks to bans on other sites — showed many Internet users were angry about the wide-ranging restrictions.

"Sad and embarrassing day in the history of Pakistan. Tough times to be a Pakistani. Questionable decisions in a so called 'democracy,"' one user tweeted.

It remains to be seen how successful the government will be at keeping Pakistan's nearly 20 million Internet users from accessing the blocked sites. Other countries, such as China, permanently ban Facebook and YouTube. But citizens often have little trouble working their way around the ban using proxy servers and other means.

"What's common to Facebook and Lashkar-e-Taiba?" one user on Twitter wrote, referring to a Pakistani militant group that is banned but has an alleged front group that operates openly. "They are both banned in Pakistan, but Pakistanis can still find them if they want to."