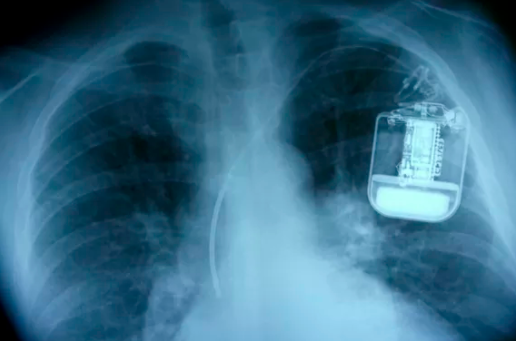 Authorities suspect Compton, 59, started the blaze deliberately. After what some might think was an unusually thorough investigation, prosecutors issued an indictment for aggravated arson and insurance fraud in January.

In May, Compton's lawyer moved to have the court suppress any evidence obtained in a search he deemed illegal. It so happened, you see, that authorities had obtained data from Compton's pacemaker.

On Tuesday, however, a Butler County, Ohio, judge decided the pacemaker evidence can be presented at trial.

The local Journal-News reports that police obtained the data from Compton's artificial heart implant and asked a cardiologist to examine whether it offered data consistent with Compton's telling of events.

Compton has said the fire woke him up, that he packed some belongings into a suitcase, broke a window with his cane and threw the luggage outside. Then, he left the house, picked up the bags and went to his car.

The cardiologist concluded that a comparison of his heart rate, his cardiac rhythms and the demands placed on his pacer were inconsistent with that story.

The Butler County Prosecutor's Office didn't immediately respond to a request for comment.

However, Compton's lawyer, Glenn Rossi, told me that he was disappointed with the court's decision to allow the evidence, saying the issue is bigger than just his client's case. Allowing such evidence, he said, "further expands the government's ability to access some of our most fundamental private information."

Indeed. Would the information Apple, Google and other companies that are using to turn their devices into health hubs also be vulnerable to search?

"We take the strong position that medical data regarding the inner functions of one's body designed to assist a doctor in keeping a patient alive should be safeguarded against government overreach," Rossi told CNET. "As was argued to the court, what is next on this slippery slope as technology advances?"

Judge Charles Pater, however, thought this wasn't about privacy at all.

"There is a lot of other information about things that may characterize the inside of my body that I would much prefer to keep private rather than how my heart is beating. It is just not that big of a deal," he said in his judgment.

Some might worry, though, that all sorts of gadgetry that many think is personal might now be more vulnerable to review by police and prosecutors.

In New Jersey, for example, a bill was introduced in 2013 that would have required all cell phones to be automatically subject to a police search after an accident. The bill subsequently died. Still, lawmakers in New York are now considering legislation that would require people involved in crashes to hand over their cell phones so that police could subject the device to a so-called Textalyzer. This is a device that can see whether the phone has been in use. However, once you've handed over your phone to a police officer, what might they see?

The more our lives are stored on devices and in clouds, the more they become, well, potential evidence.

This decision might make some worry that there will soon be no limits on how intimate the evidence can get.

Technically Incorrect: Bringing you a fresh and irreverent take on tech.