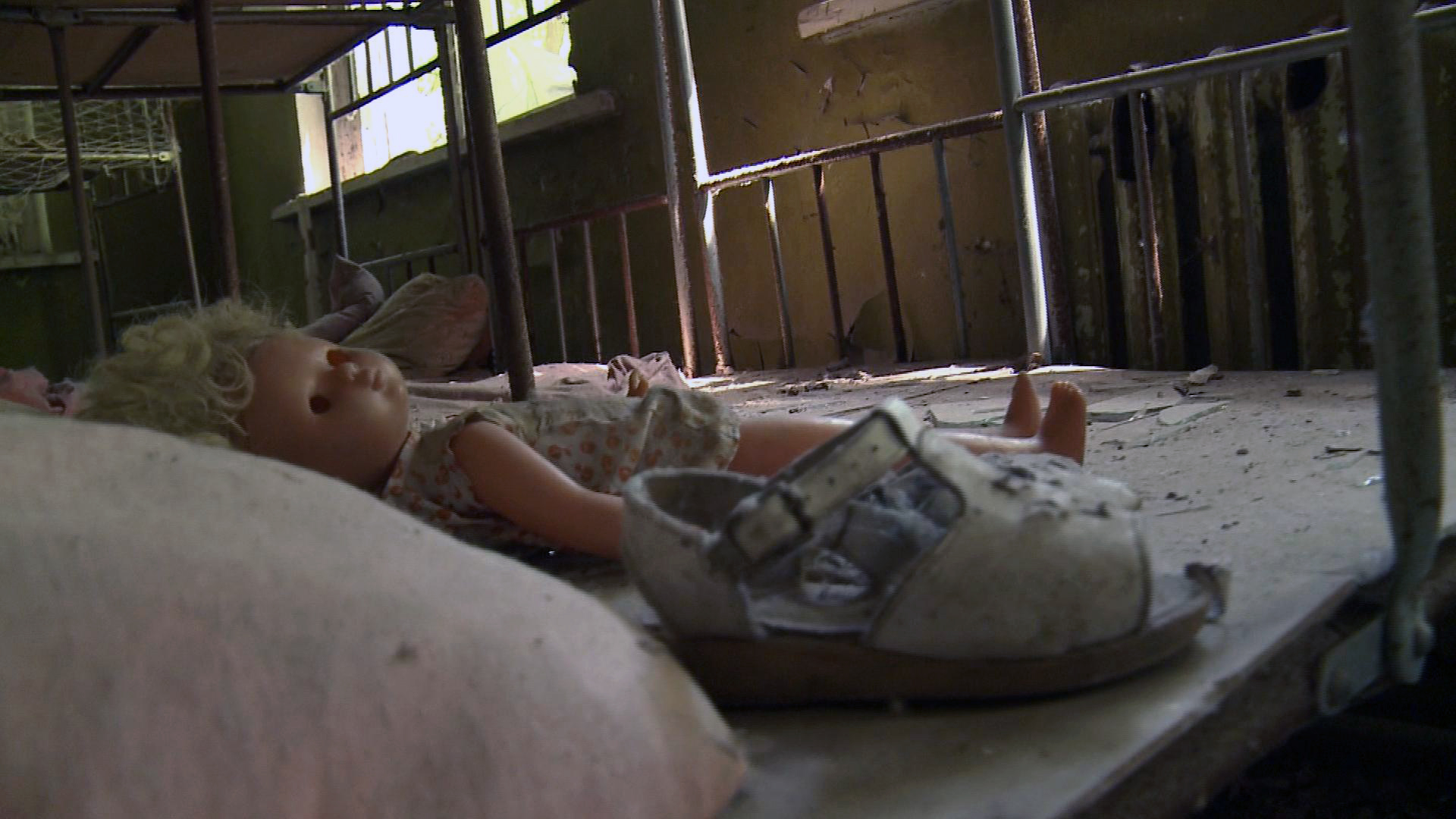 The following is a script of "Chernobyl" which aired on Nov. 23, 2014. Bob Simon is the correspondent. Michael Gavshon and David Levine, producers.

Some tragedies never end. Ask people to name a nuclear disaster and most will probably point to Fukushima in Japan three years ago. The nuclear meltdown at Chernobyl in Ukraine was 30 years ago, but the crisis is still with us today. That's because radiation virtually never dies. After the explosion in 1986, the Soviets built a primitive sarcophagus, a tomb to cover the stricken reactor. But it wasn't meant to last very long and it hasn't. Engineers say there is still enough radioactive material in there to cause widespread contamination. For the last five years a massive project has been underway to seal the reactor permanently. But the undertaking is three quarters of a billion dollars short and the completion date has been delayed repeatedly. Thirty years later, Chernobyl's crippled reactor still has the power to kill.

It's called the Zone and getting into it is crossing a border into one of the most contaminated places on Earth. The 20-mile no man's land was evacuated nearly 30 years ago. Drive to the center of the Zone today and you'll see a massive structure that appears to rise out of nowhere. It's an engineering effort the likes of which the world has never seen. With funds from over 40 different countries, 1,400 workers are building a giant arch to cover the damaged reactor like a casserole. It will be taller than the Statue of Liberty and wider than Yankee Stadium -- the largest movable structure on Earth. Nicholas Caille is overseeing the arch's construction.

Bob Simon: You know when you think about it, you have this massive project going on. All these people working here. Billions of dollars being spent because of one day 30 years ago.

Nicolas Caille: Yeah, yeah, yeah, you're right. It was the biggest disaster of the nuclear industry, yes.

The disaster was sparked by massive explosions that tore the roof off of Chernobyl's reactor number four, spewing radioactive dust into the atmosphere.

The Soviets drafted over half a million troops to put out the fire and clear the nuclear debris. Thousands got seriously ill from radiation exposure. Today, three decades later, the cleanup continues.

But as this recent video shows, the reactor is still packed with poison: heaps of gnarled steel and concrete, pools of nuclear fuel that have hardened into a dense mass called the "elephant's foot."

There's still so much radiation coming from the reactor that workers have to construct the arch nearly a thousand feet away, shielded by a massive concrete wall. When finished, the arch will be slid into place around the Sarcophagus, then sealed up.

Nicolas Caille: We will push it in once, the average speed it will be around 10 meters an hour. So it's approximately the speed of a snail.

Bob Simon: Right. But that's pretty rapid considering the size of this thing.

Nicolas Caille: It is. Yes, yes.

But the construction itself will have to move a lot quicker. The old plant and sarcophagus are falling apart. Just two years ago, a snow storm caused the roof of one of the buildings to collapse, forcing workers to be evacuated and raising fears of further contamination.

Radiation is not subject to the usual rules of life and death. It is virtually eternal. When Caille took us on a tour of the site, we were fitted with dosimeters to tell us how much we were being exposed to. Suddenly, a sound we didn't want to hear.

Bob Simon: You're sure?

Building the arch under these conditions is challenging enough. But some of the biggest obstacles have nothing to do with radiation. As violence gripped Ukraine this year, one of the arch's contractors backed out. The project is also 770 million dollars short, and it has been plagued by repeated delays.

No matter when it's completed, vast stretches of the Zone will never recover. This is the city of Pripyat, two miles from the reactor. Thirty years ago, the population was 50,000. Today it is zero. Pripyat was where many of the plant's workers lived, grateful for their posting in a town that was the model of Soviet modernity.

Nine-story apartment buildings lined this boulevard. They're still there, but you can't see them anymore. The forest has taken over. A vision perhaps of what the whole world might look like were people to just disappear.

It was springtime in Pripyat that day in 1986, and an amusement park was due to open in a few days. Andre Glukhov lived here then.

Bob Simon: So, that Ferris wheel never had any kids in it?

Andrey Glukhov: Never had any kids. These bumper cars, on your left, had never kids on it, too.

Bob Simon: When you talk to your former neighbors, what do you call it? The accident? the catastrophe?

Andrey Glukhov: We just call it 26, which was the date of the accident.

Back then, Glukhov worked for Chernobyl's nuclear safety division. He took us on a tour through a part of the plant that had not been destroyed. He was off duty that night, but what he saw when he drove past the damaged reactor was like nothing he, or anyone else, had ever seen.

[Andrey Glukhov: This is the control room...]

Andrey Glukhov: This was a terrifying picture. It looked like a sunset in the distance, about 100, 200 yards from you. And this was the glowing core of the reactor.

Bob Simon: That was the first and the only time you saw it?

Andrey Glukhov: No, that was the first time when I realized the scale of the disaster.

Glukhov told his family in Pripyat to stay inside and close the windows. Soviet authorities covered the area with secrecy, told people they had nothing to worry about. But 36 hours later, over a thousand busses were sent in to evacuate everyone. Authorities told people it would only be for three days -- one of many lies. The people never came back, and Pripyat is being overwhelmed by the elements. One of the only things still recognizable is that old Soviet iconography.

Drive through the Zone, and you'll find that many villages suffered the same fate as Pripyat. A row of simple markers has been planted with the names of each one.

But amidst this wilderness, the strangest sight of all. People, just a few. Ivan Ivanovitch and his wife Maria were evacuated to an apartment block near Kiev after the accident, but couldn't take it. They weren't made for the city, so two years later, they came back. Today, there are three other people living in this village... just a few miles from the old power plant.

Bob Simon: When you decided to come back to live here, did anyone tell you it was dangerous?

Ivan Ivanovitch: It's really OK here. You know, when I lived in that apartment block, I got sick all the time. But when I came back here, I was fine. And I've been fine ever since.

Ivan Ivanovitch: I would be long gone if I'd stayed there. I'd be in the ground.

Despite the danger, Tim Mousseau also chose to be here. For the last 15 years, the University of South Carolina biologist has been studying the contamination's impact from a makeshift lab inside the Zone.

Bob Simon: Aren't many serious labs I've seen that look like this.

Tim Mousseau: Yeah this is an opportunistic lab. It's an old villager's house.

Mousseau's research has shown that the catastrophe continues to take its toll.

Tim Mousseau: And we're going to attempt to measure just how radioactive these mice are.

Bob Simon: What's the comparison between the amounts of radiation a mouse would have here and a mouse somewhere else?

Tim Mousseau: Some of these mice have on the order of 10,000 times more radioactivity in their bodies than in clean areas.

The human toll has been profound as well. Thyroid cancer and leukemia affected thousands -- though the exact number of deaths is still being debated.

Tim Mousseau: There certainly is evidence that some of the genetic damage that occurs at the level of the DNA can be transmitted from one generation to the next.

Bob Simon: So a nuclear disaster is never over?

Tim Mousseau: There will be areas that will be contaminated for thousands, if not millions, of years.

This makes the Zone like no other place on Earth, which is why it's attracting tourists. If you've done Paris and Rome, why not try a holiday in hell. Check out the apocalypse?

Bob Simon: How did your friends react when you told them you were coming on vacation to Chernobyl?

David McHale: They thought it was very strange, you know. But, I mean, people have been coming here for a while, so you know, I guess it must be safe.

Bob Simon: You guess it must be safe. What makes you believe it's safe?

David McHale: Well, you know, I would assume that the guides wouldn't bring people here if it wasn't safe.

Bob Simon: All right, well, I hope you're right.

David McHale: So do I.

Thousands of workers flood into the Zone every day, to look after what remains of the plant. Others live here year-round, in one of the few places safe enough for inhabitants: the town of Chernobyl itself.

Yevgen Goncharenko was our guide. He lives here too.

Bob Simon: Why are you living here and not in Kiev?

Yevgen Goncharenko: Because I like this place. For me and it's very interesting maybe even sacred place for me.

Yevgen Goncharenko: For me, yeah.

A decade after the disaster, workers here built a monument honoring their colleagues whose lives had been destroyed.

Bob Simon: The workers and the firemen made the monument themselves?

Bob Simon: And what does it say?

Yevgen Goncharenko: "To those who saved the world."

Bob Simon: "To those who saved the world."

That may sound a bit hyperbolic. But when the reactor exploded in 1986, radioactive dust and debris were carried as far away as Italy and Sweden. Until the arch finally seals up that stricken reactor, and no one knows when that might be, something like that could happen again. Unlike other historic relics, Chernobyl does not belong to the past; its power will never die. Chernobyl is forever.