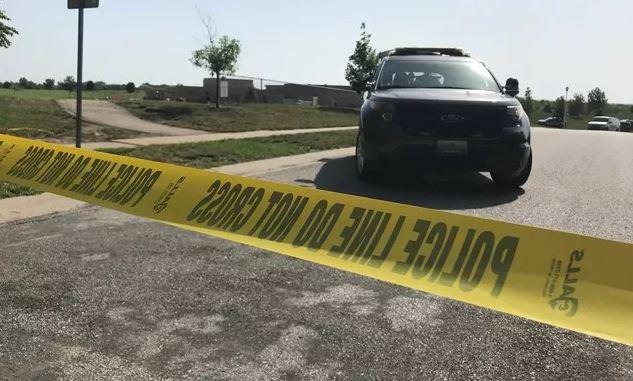 OVERLAND PARK, Kansas -- Police in suburban Kansas City say a suspect has been taken into custody in a Tuesday morning crime spree that spanned three scenes and left a contract worker at a local elementary school dead. In the first incident, two workers outside Sunrise Point Elementary school in Overland Park were shot and wounded, Overland Police public information officer John Lacy told CBS News. School is out of session and no students were at the school at the time of the shooting, around 9 a.m., reports CBS affiliate KCTV.

One of the wounded contractors later died, Overland Park police said. The other remains in critical condition. Police say the two men were part of a group of up to six workers in the area and that the suspect in the case was a fellow contractor, police say. Police later identified the suspect as 32-year-old Anthony David Grable of Kansas City.

The workers had been at the school renovating a playground, and the shooting happened after some kind of argument, KCTV reports.

Grable fled and attempted a carjacking at a nearby car wash, police say. Police say shots were fired but no one was hit.

When that carjacking was unsuccessful, he allegedly carjacked another vehicle, described as a Black 2011 Denali.

Police later said they located the vehicle abandoned, but the suspect was still at large. Lacy said via Twitter just before noon that police had surrounded a home near W. 159th and Rosewood in relation to the shooting, and Grable was soon after arrested outside the home, the station reports.

No one else was injured.

The names of the victims have not been released. There was no word of a motive.