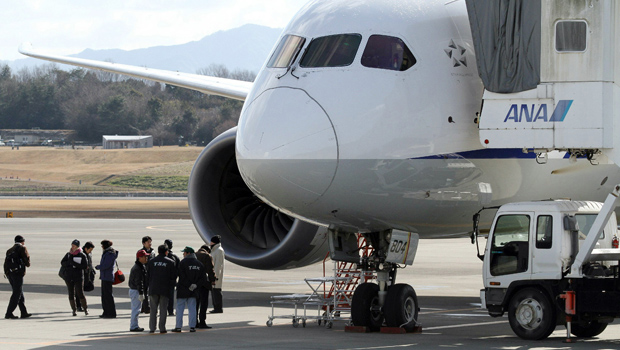 WASHINGTON It's likely that fires on two Boeing (BA) 787 Dreamliners were caused by overcharging lithium ion batteries, aviation safety and battery experts said Friday, pointing to developments in the investigation of the Boeing incidents as well as a battery fire in a business jet more than a year ago.

An investigator in Japan, where a 787 made an emergency landing earlier this week, said the charred insides of the plane's lithium ion battery show the battery received voltage in excess of its design limits.

The similarity of the burned battery from the All Nippon Airways flight to the burned battery in a Japan Airlines 787 that caught fire Jan. 7 while the jet was parked at Boston's Logan International Airport suggests a common cause, Japan transport ministry investigator Hideyo Kosugi said.

"If we compare data from the latest case here and that in the U.S., we can pretty much figure out what happened," Kosugi said.

In the case of the 787 in Boston, the battery in the plane's auxiliary power unit had recently received a large demand on its power and was in the process of charging when the fire ignited, a source familiar with the investigation of the 787 fire in Boston told The Associated Press. The plane had landed a short time earlier and was empty of passengers, although a cleaning crew was working in the plane.

The source spoke on condition of anonymity because he wasn't authorized to speak publicly.

The Federal Aviation Administration issued an emergency order Wednesday temporarily grounding the six 787s belonging to United Airlines (UAL), the lone U.S. carrier operating Boeing's newest and most technologically advanced airliner. The Japanese carriers already had grounded their 787s, and airlines and civil aviation authorities in other countries followed suit, shutting down all 50 Dreamliners that Boeing has delivered so far.

A battery fire in a Cessna Citation CJ4, a business jet, prompted the Federal Aviation Administration in October 2011 to issue an emergency order requiring the lithium ion batteries in all 42 of the jets in operation at that time to be replaced with a conventional nickel-cadmium or lead-acid battery. The fire occurred while the plane was hooked up to a ground power station at Cessna's aircraft completion center in Wichita, Kan. Normally, that would cause an aircraft battery to automatically start charging, experts said.

A letter from Cessna to CJ4 owners after the incident cautioned: "Do not connect a ground power unit to the airplane if you have reason to believe the battery may be in a depleted state ... Do not leave the aircraft unattended with a ground power unit connected."

The Citation was Cessna's first business jet with a lithium ion battery as its main battery, and the 787 is the first airliner to make extensive use of lithium ion batteries. But the two are vastly different in size and in other respects, including their electrical systems, making comparisons difficult. Their batteries also came from different makers. The reasons they overcharged are likely to be different, experts said.

However, the three incidents - the two 787 fires and the Citation fire - underscore the vulnerability of lithium ion batteries to igniting if they receive too much voltage too fast, experts said. Other types of batteries may overheat in those circumstances, but they are far less susceptible to starting a fire, they said.

"Other batteries don't go this wrong when you treat them this badly," said Jay Whitacre, an associate professor of materials science and engineering at Carnegie Mellon University. "The overall story here is these batteries are full of flammable electrolyte and they will burn if they are mistreated and something goes wrong."

There was one lithium ion battery fire during testing of the batteries while Boeing was working with FAA on certification of the 787, said Marc Birtel, a spokesman for the aircraftmaker.

However, that fire was due to problems with the test rather than the batteries themselves, he said.

"There are multiple backups to ensure the system is safe," Birtel said. "These include protections against over-charging and over-discharging."

But John Goglia, an aviation safety expert and former National Transportation Safety board member, said, "it certainly sounds like based on what has been released so far that we have an issue of the battery charger or some other source providing too much energy to the battery."

He said too-rapid charging might cause the electrolyte fluid in the batteries to overheat, leak and catch fire.

If the fires are due to overcharging batteries, that might be good news for Boeing, Goglia said. A flaw in the aircraft's electronics that permits overcharging would likely be much easier to fix than having to replace the aircraft's lithium batteries with another kind of battery, he said.

Boeing's headaches with the 787's lithium batteries are likely to cause European safety officials and other regulators around the world to take a harder look at the new Airbus plane's batteries, safety experts said.

"I think they're going to have a learning experience here that probably is going to result in future modifications for anybody who wants to design an aircraft and use this type of battery technology," said Robert Fiegl, chairman of aeronautical science at Embry-Riddle Aeronautical University in Prescott, Ariz.

The FAA, like aviation regulators in other countries, relies on the aircraft manufacturers to test their planes to make sure they are safe. FAA's certification engineers validate that testing and ensure that the level of safety meets FAA regulations. Boeing developed the safeguards for the 787s lithium batteries, but they had to win FAA's approval first.

The safety certification for the design, manufacturer and assembly of the 787 - a process that requires FAA approval each step of the way - was different in some respects from other aircraft because the Dreamliner employs so many cutting-edge technologies, safety experts said.

Besides its use of lithium batteries, the 787 is the first airliner whose structure is mostly made from composite materials rather than aluminum. The aircraft also relies to a greater extent than previous airliners on electronics to operate, rather than hydraulic or mechanical systems.

The 787 was tested extensively both before and after its first test flight in 2009. The FAA said its technical experts logged 200,000 hours testing and reviewing the plane's design before it was certified in August 2011.

Six test planes ran up some 4,645 flight hours. About a quarter of those hours were flown by FAA flight test crews, the agency said in 2011.