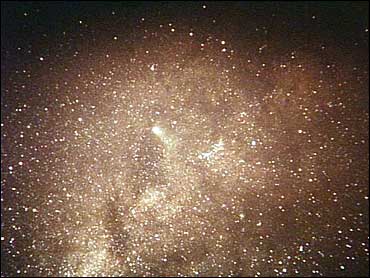 Take that, Andromeda! For decades, astronomers thought when it came to the major galaxies in Earth's cosmic neighborhood, our Milky Way was a weak sister to the larger Andromeda. Not anymore.

The Milky Way is considerably larger, bulkier and spinning faster than astronomers once thought, Andromeda's equal.

Scientists mapped the Milky Way in a more detailed, three-dimensional way and found that it's 15 percent larger in breadth. More important, it's denser, with 50 percent more mass, which is like weight. The new findings were presented Monday at the American Astronomical Society's convention in Long Beach, Calif.

That difference means a lot, said study author Mark Reid of the Harvard-Smithsonian Center for Astrophysics in Cambridge, Mass. The slight 5-foot-5, 140-pound astrophysicist said it's the cosmic equivalent of him suddenly bulking up to the size of a 6-foot-3, 210-pound NFL linebacker.

"Previously we thought Andromeda was dominant, and that we were the little sister of Andromeda," Reid said. "But now it's more like we're fraternal twins."

That's not necessarily good news. A bigger Milky Way means that it could be crashing violently into the neighboring Andromeda galaxy sooner than predicted — though still billions of years from now.

Reid and his colleagues used a large system of 10 radio telescope antennas to measure the brightest newborn stars in the galaxy at different times in Earth's orbit around the sun. They made a map of those stars, not just in the locations where they were first seen, but an additional dimension of time — something Reid said hasn't been done before.

With that, Reid was able to determine the speed at which the spiral-shaped Milky Way is spinning around its center. That speed — about 568,000 miles per hour — is faster than the 492,000 mph that scientists had been using for decades. That's about a 15 percent jump in spiral speed. The old number was based on less accurate measurements and this is based on actual observations, Reid said.

The paper makes sense, but isn't the final word on the size of the Milky Way, said Mark Morris, an astrophysicist at the University of California Los Angeles, who wasn't part of the study.

Being bigger means the gravity between the Milky Way and Andromeda is stronger.

So the long-forecast collision between the neighboring galaxies is likely to happen sooner and less likely to be a glancing blow, Reid said.

But don't worry. That's at least 2 to 3 billion years away, he said.