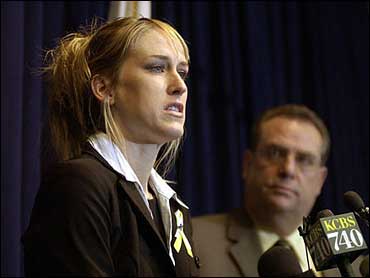 The woman who came forward to police admitting an affair with Scott Peterson, the husband of the missing pregnant California woman, says she was unaware that Peterson was married.

At a press conference held by Modesto police Friday night, the woman came forward with a statement saying that she was involved with extramarital relations with Peterson. Police say she cooperated fully with the questioning and is not considered a suspect in the investigation.

Police refused to comment further on the investigation except to say that it was "moving forward".

Meanwhile, the brother of Laci Peterson said he can no longer stand by her husband.

Brent Rocha says Scott Peterson has failed to answer too many questions. At a news conference marking the one-month anniversary of his sister's disappearance, Rocha tearfully urged his brother-in-law to cooperate fully with police.

Rocha supported Scott Peterson in the early phases of the investigation into her disappearance. He says Peterson has since admitted he was having an affair with another woman.

Police haven't labeled Peterson a suspect, but say they haven't ruled him out, either. He has reportedly declined to take lie detector tests and has retained a criminal defense attorney in Modesto.

Peterson's 27-year-old wife, Laci, has been missing since Christmas Eve. Scott Peterson told police he was fishing at the Berkeley Marina at the time, and that his wife, due to deliver a boy Feb. 10, had planned to take her dog for a walk that morning.

Modesto police repeatedly searched the waters of the marina but found no sign of the missing woman.

Peterson, along with his parents, brother and sister, were in Los Angeles distributing fliers Sunday, and promised to expand search efforts to San Diego this weekend. But police say they are concentrating their search efforts in and around Modesto, which is about 80 miles east of San Francisco.

Laci Peterson's family said Friday they believe Scott Peterson has lied to them and asked him to cooperate with police.

Petersen said police have shown the family recent photographs of Scott Peterson with a girlfriend. The husband had previously denied such a relationship, the family said.

Volunteers said Scott Peterson comes into the hotel search headquarters early every morning. Last Saturday, he went out with volunteers early in the day, according to his father, Lee Peterson.

Since her disappearance, hundreds of volunteers and police officers have scoured East La Loma Park and rural areas, towns and rivers outside Modesto.