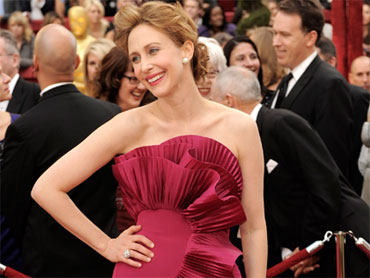 The Academy Awards is without question Hollywood's biggest night, a time when the world stops to gawk at its celluloid heroes. Here's an insider's look from the Kodak Theatre at what you are not seeing on camera.

While the mood is chaotic outside on the red carpet, it's refreshingly calm inside the Kodak Theatre nearly an hour before the start of the 82nd Academy Awards. Dozens of ushers and other workers chitchat amid the empty blue orchestra seats where nominees and other A-listers will soon be perched for the ceremony. On stage, the ivory floor below the crystal-blanketed curtain receives a last-minute cleaning.

Robert Downey Jr. arrives backstage with his wife and they head straight for the green room, where Elizabeth Banks and Jeremy Renner are already relaxing. Meryl Streep breezes through the area, a glass of champagne in hand. Javier Bardem stands in the hallway with a soda as Penelope Cruz stops by the makeup station for a quick touchup.

The first nominee to arrive with a front row seat? Vera Farmiga, who sits alone adjusting her flowing crimson gown. It's not long before her "Up in the Air" co-star and fellow supporting actress nominee Anna Kendrick shows up and introduces Farmiga to her mother.

With just minutes to show time, a parade of A-listers including Jeff Bridges, Colin Firth, Helen Mirren and Sandra Bullock hustle into the theater. Bullock stops to tell a dancer, "You rock," while Bridges, a fixture on awards shows this year for his performance in "Crazy Heart," jokes to Firth that he "has the walk down." Neil Patrick Harris tap dances in place and sings to himself. "Good times, good times," Harris tells himself as walks on stage to announce that the show is under way.

Bromance in aisle three! Bradley Cooper, Jake Gyllenhaal, Jason Bateman and Gerard Butler have convened just before the show, laughing and patting each other on the back. A female voice comes over the speakers to warn that the first commercial break won't be until 25 minutes into the show. Some of the audience members gasp before they rush to take their seats.

James Cameron may be "the king of the world" after that "Titanic" sweep of a few years back, but he's not in the front row this time. The "Avatar" king is four spots behind Sandra Bullock and one row behind his ex-wife, "The Hurt Locker" director Kathryn Bigelow.

Photographers click away as Cameron Diaz and Steve Carell chat backstage. "Get rid of all the ones where our faces are like this," Diaz tells the shooters as she makes a funny face. When one of the photogs snaps that pose she adds with a smile, "Oh that's terrible. I'll remember your face!"

A stage manager holds a tiny flashlight up so Penelope Cruz can do some last-minute rehearsing before walking on stage to announce the award for best supporting actor. After Christoph Waltz wins it, she walks him offstage and introduces him to her fiance, Javier Bardem.

Ever wonder what Oscar winners are looking at when they walk on stage to thank everybody? As Christoph Waltz collected his best supporting actor trophy he saw a huge monitor that counted down from 45 seconds. When the countdown reached 10 seconds, the background changed from black to yellow. When it hit zero, and Waltz was still talking, it flashed to red and the words "Please Wrap Up" came on the screen.

Applause doesn't decide who receives an Oscar, but if it did, first-time nominees Gabourey Sidibe from "Precious" and Jeremy Renner from "The Hurt Locker" would be taking home little gold men. The pair received the biggest reaction from the crowd inside the Kodak Theatre when the best actor and actresses nominees kicked off the show. Meryl Streep was a close second.

Mo'Nique is the night's first Oscar winner to receive a resounding standing ovation for her supporting actress role in "Precious." The first on his feet for her? Lenny Kravitz, the singer-actor and one of her "Precious" co-stars.

The Brat Pack is Back: Jon Cryer, Judd Nelson, Ally Sheedy and Anthony Michael Hall are huddled around a backstage monitor, along with Macaulay Culkin, as Robert Downey Jr. and Tina Fey walk offstage with original screenplay Oscar winner Mark Boal. The group had reunited for a tribute to the late John Hughes, who made all of them stars in such 1980s and early '90s youth films as "The Breakfast Club," "Pretty in Pink" and "Home Alone."

"Excuse me, you're in my seat." A pair of seat fillers got so caught up watching Zoe Saldana and Carey Mulligan present the Oscars in the short-film categories that Matt Damon and his wife had to tap them to get their attention.

The star power inside the Kodak Theatre on Oscar night is so bright that some folks must wear sunglasses. Among them, T-Bone Burnett, who won the best song trophy with Ryan Bingham for the theme from "Crazy Heart." Good Charlotte frontman Joel Madden, who is spinning old-school tunes during commercials as the show's official disc jockey, also has his signature shades on.

Commercials don't play on the monitors inside the Kodak Theatre. So how did that one for J.C. Penny just get through?