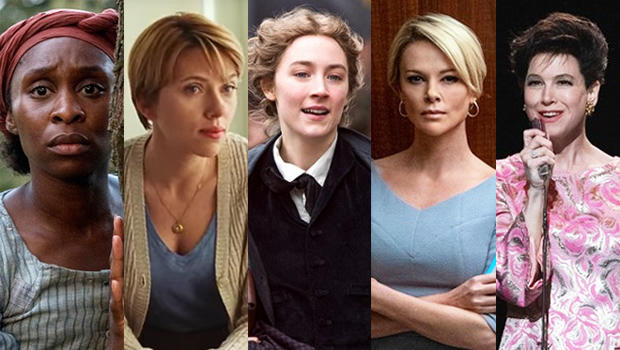 Check out clips and interviews below with the five nominees for this year's Academy Award for Best Actress.

Winners of this year's Oscars will be announced on Sunday, February 9, at the Dolby Theatre at Hollywood & Highland Center in Hollywood.

A Tony Award-winner for the Broadway musical "The Color Purple," Cynthia Erivo earned her first acting Oscar nomination for her starring role as abolitionist Harriet Tubman in the biopic "Harriet." The movie traces her life from escaping bondage in the South, to aiding dozens of other slaves to freedom via the Underground Railroad. For a life as vivid and consequential as Tubman's, the movie paints history with a very wide brush, and Erivo gets to play her fear, courage, determination, spirituality and selflessness.

In this scene, Harriet, who has escaped to the North, shares her conviction with Marie (Janelle Monáe) that she must return South to help free others. Marie patiently advises Harriet on how she must behave to pass as a free woman – and how she must act if she's in danger. Erivo balances Tubman's surety of her actions with naivite when she realizes she needs to better equip herself for the task.

"Playing her was tough and exhilarating," Erivo told "Sunday Morning" correspondent Martha Teichner. "I saw her as a young woman who had a force of will that was almost unbreakable. And she was a superhero because of that."

Erivo also told "CBS This Morning," "One thing that was really wonderful about learning about her is that she had a deep connection to her spirituality. It was really her faith — what she believes were God's directions to the way that she needed to go. And I didn't know that that was such a huge part of her story."

Erivo received a second Oscar nomination this year, for Best Original Song, "Stand Up," which she shares with Joshuah Brian Campbell.

Noah Baumbach's dramedy about the painful end of a marriage is propelled by Nicole (Scarlett Johansson), a former movie actress whose marriage to a prominent New York stage director, Charlie (fellow Oscar-nominee Adam Driver), had both fueled her artistic desire and cut her off from the financial promise of a Hollywood career. Her growing dissatisfaction becomes a meditation on her self-actualization, and a catalyst for a punch-in-the-gut divorce.

In this scene, Nicole shares backstory about her marriage to Charlie with her divorce lawyer, Nora (played by Oscar-nominee Laura Dern). Johansson's honesty about her creeping professional jealousy – "I got smaller" – and her increased subservience of herself to the marriage and to motherhood is terrific.

On CBS' "The Late Show," Johansson told Stephen Colbert that she and Driver were signed up before there was really a script, and that their conversations about parenting, relationships with families, and voices found their ways into Baumbach's screenplay.

In Greta Gerwig's adaptation of Louisa May Alcott's "Little Women," Saoirse Ronan stars as Jo, the oldest of the March sisters, whose personal journey of independence – becoming a successful writer as she supports her New England family during the Civil War – is also a romantic journey, no matter how vehemently she protests it. As much as Jo may fight the conventions and gender inequality of the day (even the literary constrictions that dictate a story with a female character should end with her married or dead), she is a romantic at heart, and Gerwig makes sure we don't miss that.

In this scene Ronan touchingly expresses that conflict to her mother (played by Laura Dern), with a painfully honest admission: "I'm so lonely."

Ronan, who'd received three previous Academy Award nominations (for "Atonement," "Brooklyn" and "Lady Bird"), told "Sunday Morning" correspondent Rita Braver that her portrayal of Jo was based, in part, on Louisa May Alcott herself: "It was like she was going into battle every time she had to write," she said. "It was like an essential thing that she had to do.  So, understanding that from Louisa's point of view just made Jo, for me, all the richer, because I had so much more heart to bring to her."

In this interview excerpt below, Ronan also described her attraction to a character who contained traits that were not necessarily "palatable."

An Oscar-winner for "Monster," and a nominee for "North Country," Charlize Theron portrays Fox News journalist Megyn Kelly, whose star rose within a climate of abusive or demeaning attitudes against female employees – a work environment that would be shattered when another broadcast star, Gretchen Carlson (played by Nicole Kidman), accused Fox CEO Roger Ailes of sexual harassment. The movie examines how the accusations – predating the #MeToo movement sparked by the Harvey Weinstein scandal – affected both the network's celebrities and the lower-level employees who had no power.

In this scene, which follows accusations made public by Carlson, Kelly voices her fear that no other women in the company will likewise raise similar concerns – setting the stage for her own Emancipation Proclamation. Theron's voice and mannerisms (assisted by Oscar-nominated makeup and hair) capture a well-known public figure, but her performance reveals a private anger that cannot be safely expressed, even behind closed office doors.

In this interview with Stephen Colbert on CBS' "The Late Show," Theron talked about capturing Theron's speech, and – as a producer of the film – the importance of making the film. Speaking of Carlson and Kelly, she said, "They were the catalysts who brought us to this place, and I think the women at Fox and everything that happened there just lent itself to great storytelling, [especially because] a lot of those women don't like calling themselves feminists."

She was nominated for her starring role in the musical "Chicago," but Renée Zellweger – who performed her own singing in "Judy" – told "Sunday Morning" correspondent Lee Cowan that she doesn't consider herself a vocalist – and here she was playing "one of the greatest vocal performers of all time."

The film examines Judy Garland's professional and personal hardships when, because of financial ruination, she accepts an offer to sing in a London nightclub in 1968. Even more daunting for Zellweger (who'd previously won an Oscar for "Cold Mountain") was the fact that she was playing Garland at a point in her career when the one-time MGM star was dousing herself with drugs and drink, resulting in stage performances that could be either expressively honest or pathetically embarrassing. Garland's desire for audience adulation was often undercut by her self-destructive behavior.

In this scene, Garland sings her signature song, "Over the Rainbow," at a point when, having been fired from the show, she worms her way on stage one last time:

Zellweger, who won the Screen Actors Guild Award for her performance, told "Sunday Morning," "I had the YouTube videos, and I put it so it reflected in a mirror, and I stood next to it, and I was watching the YouTube videos and I was doing my best to emulate [her], and I started to recognize that there were little movements that she would go back to, and I thought, Oh, this is her language."

"What do you think, after doing all that research on her, what most impressed you about her?" asked Cowan.

"That she kept going," she replied. "And that she still had that power in her voice. She just didn't quit."