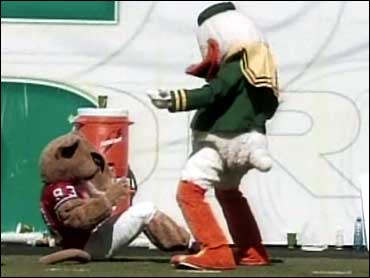 Oregon's Duck mascot has been suspended for a game because of an altercation with the Houston Cougar in the season opener.

Apparently the Duck became upset when the Cougar imitated one of the Duck's trademarks - push-ups for total points after each touchdown in front of the student section.

Next thing you know, the Cougar was on the ground and the Duck appeared to be punching him repeatedly. The fight ended up on YouTube.

Although some thought it was staged, turns out it wasn't. Hence the suspension. Because the Duck mascot is a role filled by several students, specific discipline was not disclosed.

Oregon uses the Donald Duck character as its mascot under a special agreement with Disney.