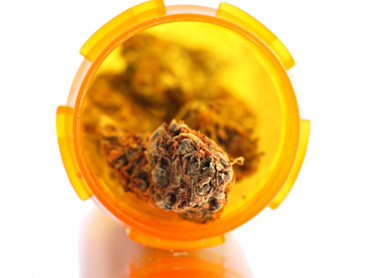 The Obama administration's decision not to interfere in U.S. states' medical marijuana laws has emboldened a citizens' initiative to get the state of Oregon involved in providing the drug for residents who have permission to use it.

Medical marijuana advocates are seeking to put on the November ballot a measure to create a system in which state-licensed pot growers would distribute their crops to dispensaries where people could buy the drug to treat their ailments.

Currently, those people either have an approved provider grow it for them or grow it themselves.

On Monday, backers of the initiative turned in 61,000 petition signatures in hopes of qualifying the issue for the ballot. A total of 82,769 valid signatures are needed to qualify the measure, and backers have until July to collect the remainder.

Oregon is one of 13 states that have legalized medical marijuana. On Monday, the New Jersey Legislature approved a bill that would make it the 14th state to allow chronically ill patients access to marijuana for medical reasons, and Democratic Gov. Jon Corzine, who supports the legislation, could sign it before leaving office next week, making it law.

Of the 13 states that have legalized medical marijuana, five of them - including California - make provision for dispensaries where patients can get the pot.

Because of earlier concerns about possible federal intervention, there had been no serious movement in Oregon to join the medical marijuana states with dispensaries.

But things changed last October, when the Obama administration announced it would not go after people in states who use medical marijuana legally.

"It was a watershed event. It's really the thing that has made this ballot initiative viable," said John Sajo, executive director of the Voter Power Foundation, which is backing the measure and which helped draft Oregon's 1998 law.

Keith Stroup, spokesman for the National Organization for the Reform of Marijuana Laws in Washington, said that the Obama administration's stance will prompt other states to also consider marijuana dispensaries.

"Within a very few years, any state that has legal medical marijuana will certainly have a legal supply. They will all allow some kind of regulated dispensary," said Stroup, who founded NORML and is the group's legal counsel.

Oregon law allows registered patients to grow up to six mature marijuana plants or designate a grower to do it for them. But many patients don't want to do either.

"People should have a safe place to obtain cannabis. We should treat it like any other medication," said Alice Ivany, a Newport woman who uses marijuana to alleviate pain she's suffered since losing her lower left arm in a timber mill accident years ago.

Ivany is one of the co-sponsors of the proposed initiative that would require the state Health Division to license, inspect and audit growers and dispensaries. It also would create a program, administered by the state, to provide medical marijuana to indigent patients.

The program would be funded by license fees and taxes on growers and dispensaries.

Oregon's current medical marijuana program was enacted by voters in 1998, who approved an initiative measure setting it up by a 55-45 percent margin.

As of Jan. 1, 26,274 patients were registered with the state to use marijuana for medicinal purposes, with 5,836 more applications pending final approval. People with pending applications are allowed under state law to use medical marijuana.

It's been estimated that there are about 15,000 medical marijuana grow sites in Oregon, operated either by the user or an approved grower.

Any proposed expansion of Oregon's program is being opposed by some law enforcement officials. They cite a spike in the number of pot busts involving growers who have received state permission to cultivate a small amount of marijuana for medical use but who grow more than the law allows and sell it illegally on the street.

Umatilla County Sheriff John Trumbo said the proposed law would only make matters worse and that he thinks the best move would be to repeal the medical marijuana program altogether.

He said that with the expansion of the medical pot program, "you're taking a stop closer to legalizing marijuana use by anybody who wants to use it."

But Klamath County Sheriff Tim Evinger said the proposed expansion would be a step in the right direction.

"If, in fact, it is a needed drug, and it is providing a benefit to somebody who is ill, I frankly think it should be purchased by prescription at a pharmacy and produced by a commercial operation that is monitored, that is secured, and the quality, content and safety issues are addressed, just like any controlled substance that is prescribed," he said.

Sajo argues that Oregon's law needs to be updated so that all qualifying patients have convenient access to quality marijuana.

"Medical marijuana is here to stay," he said. "It's time for policy makers to figure out how to make it work effectively."