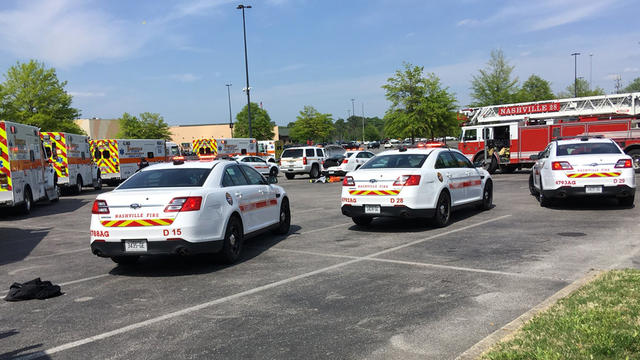 NASHVILLE, Tenn. -- A man who was wounded after a dispute led to gunfire Thursday at Opry Mills Mall in Nashville has died, police say. Metro Nashville police said the shooting was apparently the result of an ongoing dispute between two males.

CBS affiliate WTVF reports the shooting happened just before 2:30 p.m. in a hallway outside an Auntie Anne's pretzel store.

The 22-year-old victim who was shot was taken to Skyline Medical Center in critical condition, where he later died, the station reports. The suspected gunman, also 22, ran from the mall to a ticketing booth outside, placed his gun on the counter and told the people inside to call 911, the station reports.

Police spokesman Don Aaron did not immediately release the name of the shooting victim or suspect. The police official, briefing journalists at Opry Mill Mall, said the suspect told the ticket taker he wanted no further trouble after putting down his gun.

Aaron said a retired California police officer who was visiting Nashville stepped in and ordered the man to lie on the ground. The suspect was then taken into custody.

Numerous ambulances and emergency vehicles were seen outside the mall Thursday, with people standing in the parking lot.

The mall was being swept by Metro Nashville police as a precaution.

Eighteen-year-old Jayla Chapple was in an employee meeting in the back of Moe's Southwest Grill when two people bolted into the back of the restaurant to report the shooting in the mall. Chapple, a shift leader at the restaurant, says employees ran outside through a rear exit.

"I really didn't have time to think that much, but get out of there," she said.

With more than 200 stores, Opry Mills is Tennessee's biggest outlet mall, featuring a movie theater, a celebrity wax figure museum, and restaurants. It's situated nearby to the famed Grand Ole Opry and the sprawling Gaylord Opryland Resort & Convention Center.

Editor's note: This story has been updated to reflect that the victim is male. Nashville fire officials initially said the victim was female.