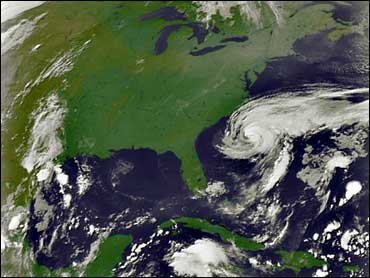 Hurricane Ophelia sat nearly stationary off the coast of the Carolinas on Sunday, taunting coastal residents made wary by the destruction that Katrina caused along the Gulf Coast.

The storm was more than 200 miles from land with sustained wind of 80 mph, but it was piling up heavy surf that challenged surfers and pounded the beaches. A hurricane watch remained in effect from just north of Edisto Beach, S.C., to North Carolina's Cape Lookout, a stretch of more than 250 miles.

Warning of the possibility of coastal flooding, Gov. Mike Easley sent 200 National Guard soldiers to staging centers in eastern North Carolina and ordered a mandatory evacuation of tourists visiting fragile Ocracoke Island on the Outer Banks, reachable only by ferry. Residents of the island were allowed to stay.

Near Wilmington at Wrightsville Beach, lifeguards with megaphones ordered swimmers out of the water.

"They are saying they don't want anyone to even touch the water," Kathy Carroll, 37, of Wilmington, said after abandoning an attempt to body surf in the waves. "Now I know how a flounder feels. I was getting tossed all over the place."

Some people stocked up on groceries during the weekend even though Wilmington, on the coast of southeast North Carolina, had breezy, partly cloudy weather, said Warren Lee, emergency management director for New Hanover County.

With a history of several destructive storms, the county has a well-rehearsed disaster plan. But Katrina, a powerful Category Four hurricane when it devastated Mississippi and Louisiana, was on residents' minds even though Ophelia was only Category One and had been waxing and waning in strength.

"If it was a Category Four barreling down here, I would get out if I had a chance," Lee said. "The structures just can't take that kind of wind. We're cautiously watching (Ophelia). We're not giving up until it's north of us."

"You never know what is going to happen," Rose Davane, 41, said while strolling on a Wrightsville Beach pier with her daughter and 18-month-old granddaughter. She said Hurricane Fran in 1996 took everything from her family. "I'm always prepared."

By 5 p.m. EDT, Ophelia was centered 250 miles east-southeast of Charleston, S.C., and about 255 miles south of Cape Hatteras with maximum sustained wind at 80 mph, the National Hurricane Center said. It had meandered slightly but essentially was stationary after following a wandering course since it became a tropical storm Wednesday off the coast of Florida.

Once the storm starts moving, the latest forecast track indicated the eye could come ashore southeast of Cape Lookout near Wilmington and cross Pamlico Sound on the central coast, said meteorologist Gil Wagi at the National Weather Service office in Newport.

A front approaching from the west could push the storm away from the coast but the likelihood of that was uncertain, he said.

Regardless of its strength, Ophelia merits respect, said Larry Jenkins, a worker at the Sportsman's Pier in Atlantic Beach.

"With what's happened down there (on the Gulf Coast) and what's happened in Florida last year and this year ... I think people are much more aware of the dangers and I don't think you'll see people taking it as lightly as they possibly would have otherwise," Jenkins said.

Few fishermen came to the pier Sunday as 6- to 8-foot swells rolled ashore early in the day with wind gusting to 25 mph, Jenkins said. The swells seemed slightly weaker by midday but the owners of hundreds of pleasure and commercial boats docked in Atlantic Beach and nearby central coast towns had started securing their craft.