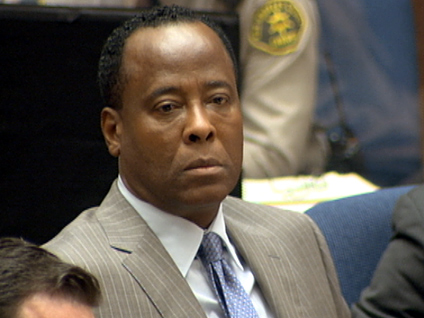 (CBS/AP) LOS ANGELES - Opening statements began Tuesday in the trial of the doctor accused of killing Michael Jackson, with a prosecutor saying the superstar's misplaced trust in the doctor led to his death.

Deputy District Attorney David Walgren showed jurors a slide of Jackson on a gurney and said he would detail what happened in the final hours of the singer's life, from the time he left rehearsals to the time that paramedics were summoned to his rented mansion.

Jackson died of an overdose of the powerful anesthetic propofol. "What happened during that time frame is that the acts and omissions of Michael Jackson's personal doctor Conrad Murray directly led to his premature death at age 50."

A number of Jackson's family members were in the courthouse, including his father Joseph, mother Katherine, sisters LaToya and Janet, and brothers Jermaine, Randy and Tito.

LaToya Jackson carried a sunflower, Michael's favorite flower. Murray arrived holding hands with his mother. Murray has pleaded not guilty to involuntary manslaughter and he and his attorneys have denied he gave Jackson anything that should have killed the pop superstar.

The trial opened with a bit of star power and the one thing the King of Pop enjoyed throughout his life - a worldwide audience. Proceedings will be televised and broadcast online. More than a dozen satellite trucks and news vans were parked within a block of the courthouse.

Much of the testimony will focus on propofol, which is normally administered in hospital settings. Authorities contend Murray administered a lethal dose of the drug along with other sedatives, and lacked the proper lifesaving equipment to revive Jackson.

Defense attorneys will present an alternate theory - that Jackson ingested or somehow gave himself the fatal dose.

While much is known about Jackson's June 2009 death, the trial will reveal new information and provide a detailed record of the singer's final hours. Murray's trial is expected to be the first time that the public hears - in the defendant's own words - his account of what happened in the bedroom of Jackson's rented mansion.

Prosecutors plan to call the pop superstar's friend and choreographer, Kenny Ortega, as their first witness in the case. Defense attorneys for Murray, who could face four years in prison and the loss of his medical license if convicted of involuntary manslaughter, hope to poke holes in the prosecution's case and present jurors with their own theory that the singer was culpable for his own death.

Ortega testified at a hearing earlier this year that Murray warned him not to try to act as Jackson's physician or psychiatrist after Ortega sent the singer home from rehearsals for his final concerts because he appeared to be sick. He is also likely the best witness to walk jurors through footage of Jackson's final rehearsals that were used for the film "This Is It," which will be played in part for jurors. Ortega served as choreographer for the aborted shows and director of the theatrical film.

For most of the jury, it will be their first exposure to the footage. Only two indicated on questionnaires filled out before the trial that they had seen any portion of "This Is It."

Prosecutors plan to play a recording of the physician's interview with police conducted two days after Jackson's death, when he revealed that he had been giving the entertainer the anesthetic propofol as a sleep aid. The disclosure led to Murray being charged in February 2010 and nearly 20 months of legal wrangling over how the trial will be conducted.

Witnesses' recollections and conclusions about the events will be challenged to a far greater extent than they were during a preliminary hearing earlier this year that resulted in a judge ruling there was enough evidence for Murray to stand trial. Defense attorneys did not present a case or make an opening statement during that hearing, but lead defense attorney Ed Chernoff is expected to lay out Murray's side to jurors on Tuesday.

Superior Court Judge Michael Pastor has limited what Murray's lawyers can say about Jackson's history with drugs and his financial troubles. Prosecutors are similarly prohibited from mentioning some of the messy details of the doctor's personal life, including his sizeable debts and that he had several mistresses.