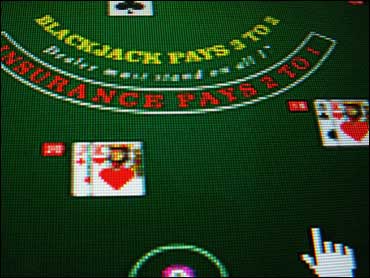 British-based online gaming companies began cashing in the chips of their U.S. operations Friday as President Bush signed a bill aimed at restricting Internet gambling in the United States.

Sportingbet PLC and Leisure & Gaming PLC both sold their U.S. operations for a token $1 while World Gaming PLC directors resigned, leaving the company in the hands of administrators.

Congress caught the gaming industry by surprise late last month when it included a provision in a bill aimed at improving port security that would make it illegal for banks and credit-card companies to settle payments to online gambling sites.

The measure's supporters include the National Football League as well as conservative and antigambling groups. Some banking groups lobbied against it.

U.S. residents account for about half of the estimated $15.5 billion in net win from wagering that operators of online betting sites were expected to generate this year, according to the betting research unit at Nottingham Business School. The total amount bet online is substantially higher, it said.

Analysts said the U.S. legislation is cleaving the industry in two. On one side are the London-based companies that are pulling out of the United States. On the other are private offshore companies located in the Caribbean that are still doing business with U.S. customers through third parties.

Looming over the decisions by the London-based companies was the arrest of two executives while traveling through the United States. Peter Dicks, the former chairman of Sportingbet, was detained in New York but released after New York Gov. George Pataki declined to sign a warrant extraditing him to Louisiana, where he was wanted on charges of illegal online gambling. Former BetOnSports PLC Chief Executive Officer David Carruthers remains under house arrest in the St. Louis area awaiting trial on federal charges based on the 1961 Wire Act.

Since then, PartyGaming PLC, the world's largest gambling company, said it had suspended all real money gaming activities to customers in the United States. Empire Online PLC said it would focus on gaming outside the United States, while 888 Holdings PLC said it was considering its options.

On Friday, Sportingbet of London offloaded $13.2 million of debt by selling its U.S. sports-betting, casino business and poker operations to Antigua-based Jazette Enterprises Ltd. The company said the sale saved it $14 million in costs it would have had to pay to close the operations. The businesses have a total of 500 employees.

Sportingbet said it will keep its European sports, casino and poker businesses, Australian sports business and the non-U.S. business of Paradise Poker.

Andrew McIver, Sportingbet's chief executive designate, said in a statement that the company was "saddened to have to dispose of such a fantastic business as a result of political actions in the U.S. Congress."

World Gaming instead appointed administrators to the business after the resignation of its directors.

"This decision (to call in administrators) follows discussions with all key parties and after receiving appropriate legal advice. These (U.S.) operations contributed the overwhelming majority of the company's revenues for the year to date 2006," World Gaming said.

Vienna, Austria-based online betting company bwin said Friday it will no longer accept new customers in the United States for its "real money" games and will only offer a "play money" lineup to the U.S. market.