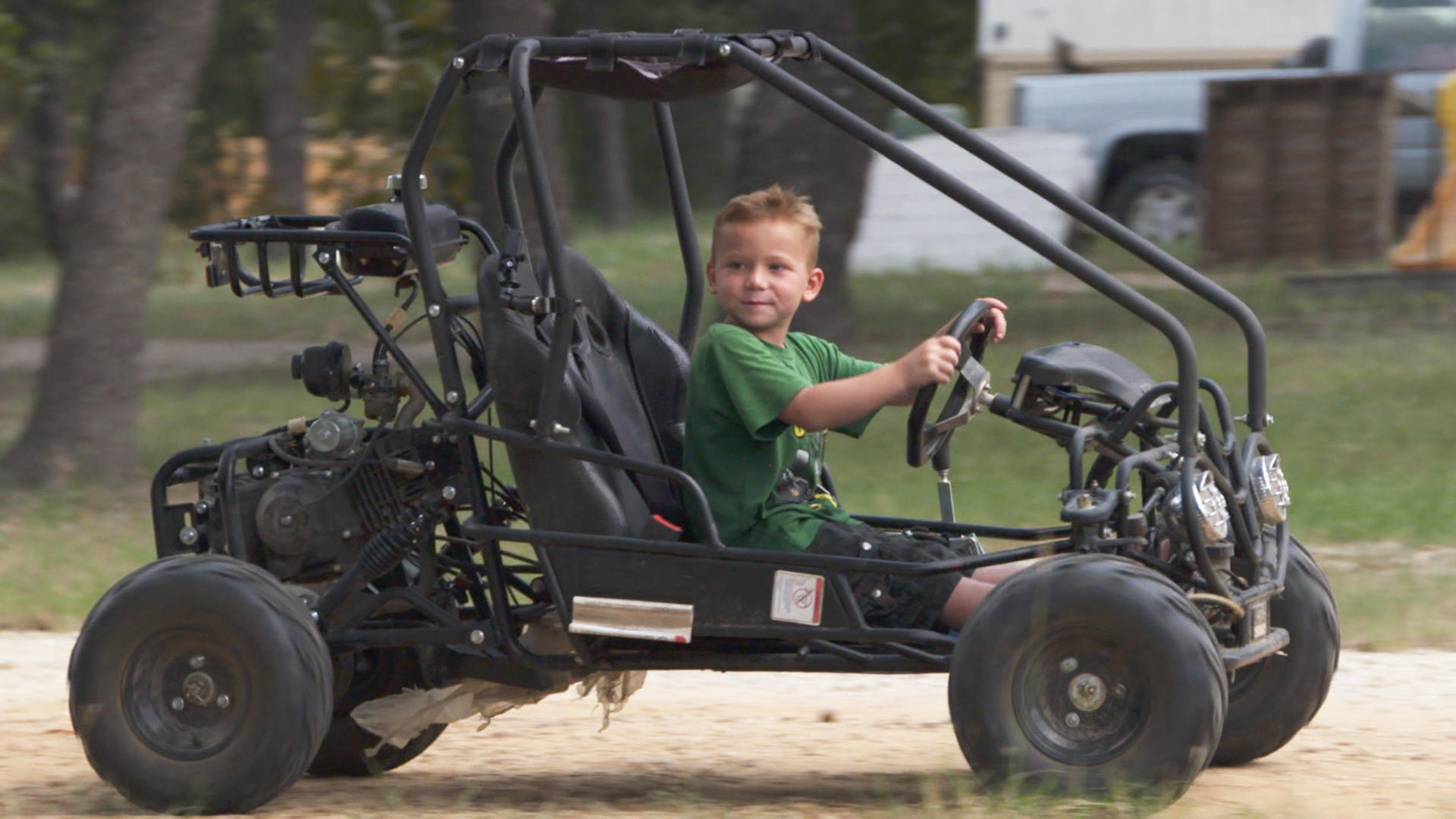 It has been one year since the day Ryland Ward's life almost ended, one year since a gunman entered the First Baptist Church in Sutherland Springs, Texas and killed 26 people, including Ryland's stepmother, Joann. She was shot more than 20 times as she shielded her children. Her daughters, Emily and Brooke, didn't make it, but Ryland and his stepsister, Rihanna, survived.

Assistant fire chief Rusty Duncan, a first responder on the scene, found Ryland that day. He had been shot five times—one wound for each year of his short life—and the injuries he sustained from the AR-15 style rifle were extensive. When Rusty carried him out of the church, another medic assumed Ryland was already dead and pulled out a black tag. In triage, a black tag is used to mark the deceased and those whose injuries are so extensive they will not survive treatment. But Rusty refused to put a black tag on the young boy in his arms.

It has taken 24 surgeries to repair his arm, leg, pelvis, intestines, kidney, bladder and hip—but one year later, Ryland Ward is still surviving. Now with the help of therapy, doctors are working to make sure the six-year-old's recovery is more than physical.

"He's a delightful kid, you know, full of life, full of energy," said Dr. Donna Roybal, a child and adolescent psychiatrist and the director of a pediatric PTSD clinic at University Hospital in San Antonio. "Definitely has a lot of those resilient factors, that resiliency that you wish you could bottle up in some ways. But [he] also struggles, as you would expect a child who has gone through that would have."

Ryland began psychiatric care very soon after the shooting. At University Hospital, Dr. Roybal set up her clinic in the same location as pediatric trauma surgeon Dr. Lillian Liao, who also treats Ryland. The proximity makes it easier for patients like Ryland to couple psychiatric care with their medical care.

In her treatment, Dr. Roybal uses trauma-focused play therapy. As Ryland explores the toys in the room, Dr. Roybal can analyze his feelings from how he's playing and what he's playing with. During a recent appointment, Ryland played with an ambulance—which is a good sign, according to Dr. Roybal.

"He wasn't afraid to play with it," Dr. Roybal told correspondent Scott Pelley in the video above. "Some kids don't want to think about what happened to them at all and will avoid that toy entirely."

When Dr. Roybal directly asks Ryland about his feelings, he usually tells her he feels happy. But that's never the emotion he feels the most. His predominant feeling typically swings between sad and angry. Dr. Roybal said her task now is to help him process what happened so he can mitigate those emotions.

"Part of our job is to help him understand and make sense of it in his world so that he's not angry, so that he's not sad to the point where it's going to interfere with his life," Dr. Roybal said.

"He's not a quitter"

One year ago, the first responder didn't know anyone was alive when he carefully stepped through the aftermath of the shooting at the First Baptist Church. Then, a small hand reached out and grabbed his pant leg. It was Ryland, lying out of sight underneath his stepmother.

"When I pulled Ryland out of the church, it was almost like nothing else crossed my mind," Rusty said in the video above. "Like, I didn't think about anybody else. I didn't even know Ryland. But for some reason that day, I didn't think of anybody else the whole time."

Rusty hasn't been able to forget Ryland since that November morning. After visiting Ryland in the hospital, Rusty has taken him to the movies and invited him over to play with his own children. Today, he considers them "friends for life."

Rusty even teaches his new friend martial arts at his nearby studio. Ryland, a boy whose injuries were so grave that a medic assigned him a black tag, is now breaking boards with his hands and feet.

Rusty is now working with Ryland and a family friend to start a foundation called R.I.D.E., which stands for Ryland's Improvements and Developmental Education. The foundation isn't to raise money for Ryland, but rather, to help future victims of trauma and mass shootings. It will focus on developing education and awareness to help prevent an event like the First Baptist Church shooting, and it will encourage young children to talk more openly about trauma, domestic violence, and bullying. Ryland's story of tragedy and survival is the centerpiece of the foundation.

To watch Scott Pelley's report about the guns used in mass shootings, like the one at the First Baptist Church, click here.

Are you owed insurance money? Here's how to check