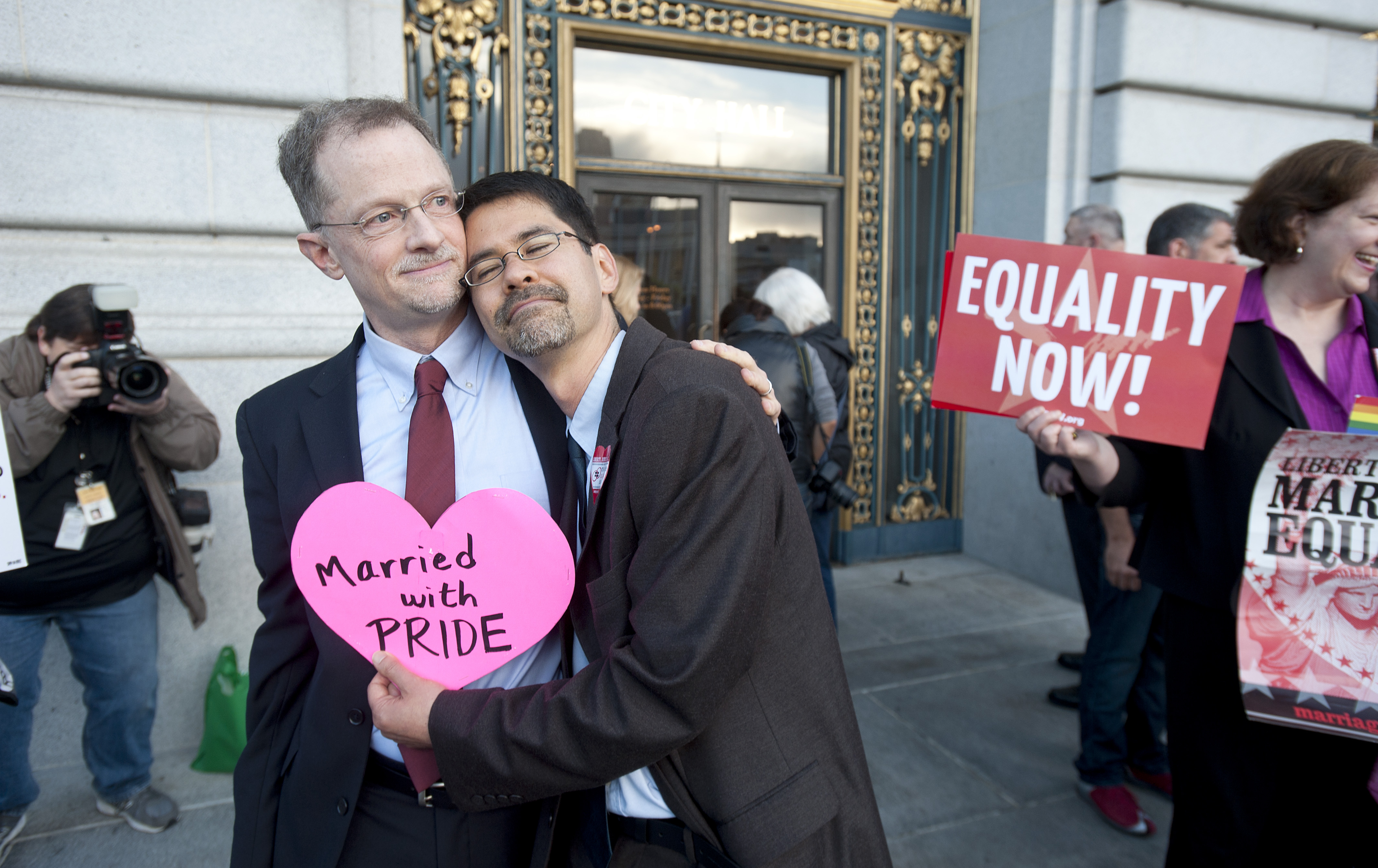 Thursday marks one year since the Supreme Court issued a landmark ruling for the gay rights movement, striking down part of the federal Defense of Marriage Act (DOMA). The court put off the fundamental question of whether same-sex couples have the constitutional right to marry, but their rulings last year nevertheless marked a turning point.

In the past year, agencies across the federal government have responded to the DOMA case, United States v. Windsor, by ensuring that married same-sex couples get thousands of federal benefits that straight married couples receive, such as the ability to file joint tax returns. The Windsor ruling also opened the floodgates for dozens of court challenges to state laws barring same-sex marriage.

At the same time, the Supreme Court left in place a patchwork system of laws that leaves LGBT couples with different rights in some states than others -- even when it comes to federal benefits, the very issue the Windsor ruling was supposed to resolve.

On Friday, Attorney General Eric Holder issued a formal report on the government's yearlong effort to implement the Windsor ruling "to the greatest extent under the law." Yet as Holder noted, the law limits the way two agencies -- the Social Security Administration (SSA) and the Veterans Affairs Department (VA) -- recognize marriages.

"Obviously, we've made huge gains and I don't want to minimize those gains because they are very, very important, but we are not anywhere close to being in a fully equal status yet," Chris Rowzee, a spokesperson for the American Military Partner Association, told CBS News.

"Probably most of mainstream America isn't even aware of the inequities that still exist," particularly for veterans, Rowzee said. "Certainly if there's any segment of the population that deserves to be treated with equality, it would be those defending those freedoms for the rest of the country."

Since 31 states still prohibit same-sex marriage, the federal government has decided to extend benefits using a "place of celebration" rule. In other words, a couple legally married in a state like New York will be recognized by the federal government even if they move to a state that doesn't sanction same-sex marriage. However, the SSA and VA cannot by law use the "place of celebration" rule; they can only extend benefits based on where a couple resides. The VA and SSA are taking some steps to work around that, but some federal benefits will still be denied to legally married gay couples.

For instance, veterans with same-sex spouses could receive less benefits for service-related disabilities if the VA cannot recognize their marriage. Additionally, ChampVA, a health care program for the spouses and children of disabled veterans, may not be available for same-sex couples.

While the Defense Department has more legal leeway to extend benefits to same-sex couples -- and has largely done so -- there are still some ways in which protections for LGBT servicemembers fall short, Rowzee said. For instance, if a gay member of the military is transferred to a state that doesn't recognize same-sex marriages, it could create custody problems.

"I could have a child with my spouse in California, but tomorrow I get moved to Virginia, which doesn't recognize my marriage," she explained. Should something happen to the spouse -- the child's biological mother -- "all of a sudden I have no legal status... The state could come and rip that child out of my home."

Meanwhile, an untold number of gay and lesbian couples will be affected by the legal limits on the Social Security Administration.

David Stacy of the Human Rights Campaign explained that same-sex couples in states that don't recognize their marriages will "continue to be excluded from all but the most basic Social Security benefits."

"For many families, Social Security benefits are a lifeline out of poverty," he said at a press conference on Capitol Hill Wednesday. LGBT people, he said, "experienced the impact of the economic downturn along with the rest of America... [and] have lower incomes and are less likely to save for retirement and disability."

Several Democrats in Congress have signed on to bills that will attempt to close some of the gaps in equality left by the Windsor ruling. Sens. Mark Udall, D-Colo., and Jeanne Shaheen, D-N.H., introduced an amendment to ensure the VA's equal treatment of same-sex spouses, while the Social Security and Marriage Equality (SAME) Act would ensure that same-sex spouses receive equal treatment under the Social Security Act.

Rep. Elizabeth Esty, D-Conn., explained on Capitol Hill Wednesday that supporting the SAME Act was personal for her -- her brother and his husband were married in California but live in Colorado, where they would be denied some Social Security benefits.

"It should not matter where you live... to take advantage of the full rights and privileges of American citizenship," she said.

Rowzee said she and other gay rights activists "don't hold out a whole lot of hope" for these bills passing in the Republican-led House -- and there's reason to believe the courts could act first. In the past year alone, federal courts in 15 out of 15 cases have struck down state marriage bans (though some of those rulings are still being challenged).

"There's no question it will inevitably have to be a Supreme Court decision that brings us nationwide equality," Charlie Joughin of the Human Rights Campaign told CBS News. "There's no way it will be any other avenue that brings us marriage equality... It's just not feasible these marriage bans are going to be picked off one by one."

Even though it may be up to the Supreme Court to finally bring about marriage equality, Diana Adams, a partner at a New York City law firm that serves LGBT families, said that attempts at legislative fixes are still important.

"Part of the reason why they're worthwhile is that the Supreme reacts to public consensus and the spirit behind an idea," she said. "The Supreme Court's perspective last year was that the nation was not ready to have states' rights to limit marriage taken away and called discrimination."

Furthermore, Adams and other advocates point out, the Supreme Court isn't obligated to take up any case. If it does, it may not issue the ruling that the LGBT is looking for.

Even the historic Windsor case didn't take all of DOMA off the books. Section 2 of DOMA still stands, allowing states to ignore other states' same-sex marriage laws.

"That's a problem in our increasingly mobile society, that you'd be married as a couple in New York but if you're driving down the East Coast to Disney with your children... your status as a parent wouldn't be recognized," Adams explained. "We see a lot of challenges for people as they move, and as they travel, with their parenting status and with whether or not their marriage is recognized."

LGBT advocates are optimistic about the momentum their cause has seen in the past year, especially as more Americans and more politicians -- such as Sen. Susan Collins, R-Maine -- voice their support for same-sex marriage.

Still, even a Supreme Court ruling in favor of same-sex marriage won't be the end of the fight for equality. Huge issues loom, such as workplace discrimination. President Obama plans to sign an executive order that would protect federal contractors from discrimination on the basis of sexual orientation or gender identity, but workers for private firms won't be guaranteed the same protection. In 29 states, it's perfectly legal to fire someone based on their sexuality.

"You could on a Saturday be in Chicago and get married and drive back to your home in Missouri, talk about how great your wedding was to your coworkers, and then your boss can fire you for being gay," Joughin explained.

As those legal battles continue, Joughin said the Human Rights Campaign is also expanding its outreach into states where gay rights is less accepted. The goal, he said, is "to spark conversations and make sure that folks know that LGBT people are their friends, their neighbors and coworkers... when you know someone, it's really hard to advocate against equality for them."